Ad of the Week: Safely Home does it again

by Oresti Patricios (@orestaki) Here’s an ad that will have you rolling on the floor with laughter — before it punches you in the gut. Director Jason Fialkov of Egg Films and FCB Cape Town’s public service announcement (PSA) for the Western Cape Government’s Safely Home initiative hits hard, and is unrelenting. But that’s just what’s makes it work.

The Western Cape Government PSA reminds me of the Darwin Awards. This organisation is “named in honor of Charles Darwin, the father of evolution” and commemorates “those who improve our gene pool by removing themselves from it”. The site features stories of people who have been successful in offing themselves in unusual ways, as well as “honorable mentions”: stories of those who’ve narrowly escaped untimely deaths by foolhardy actions. A lot of these stories involve people doing stupid things while using their cellphones.

Which is pretty much the opening to the latest Safely Home PSA to create awareness of the dangers of texting while driving. The Western Cape Government, working in conjunction with FCB Cape Town (which won the account towards the end of 2016), has decided to take a different approach. This campaign uses humour to draw attention, and then uses a quick shock to deliver a stunning message. (Last year, our 2016 Ad of the Year was Fialkov’s First Kiss, also for Safely Home and also making use of shock tactics.)

The Safely Home PSA taps into the spontaneous comedy of “FAIL” videos with a hard-hitting message. The ad starts off with a CCTV-like montage of people trying to text while walking, and learning the hard way. They walk into poles, trip into a pond or generally make a fool of themselves because they’re not paying attention to where they’re going.

The music supports the comedy, with a tune that would be suited to a slapstick movie. A message is flashed up on the screen: “You can’t even text and walk.”

The scene then cuts to a young woman (possibly a teenager) texting while driving. The camera is mounted on the dashboard, with a wide-angle lens and the colour reduced to match the previous montage. The woman glances up at the road but, for the most part, is focused on her phone. Suddenly she is thrown sideways. The car is jolted. Tumbles. Turns. The music stops and the sounds of the crash continue. The car rolls over and over. It comes to rest upside down — the woman hanging, suspended by her seatbelt. 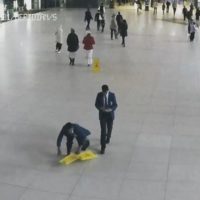 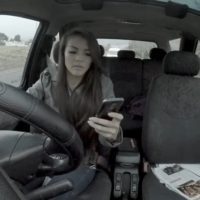 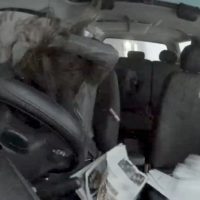 It’s a shocking moment, made doubly so by the comedy that precedes it. The message flashed on the screen is almost redundant: “So why do you text and drive?”’ This is followed by the hashtag #itcanwait and the Western Cape Government’s Safely Home website and logo.

It can wait! In an age of instant gratification and always-on connectedness, there’s a massive drive to always be in contact. Yet there’s nothing more important than arriving where you are going, healthy, safe and alive. When you’re driving, your mobile phone must wait. Put it away until you get where you’re going.

Getting this message to today’s youth is a hard task but I would say that FCB Cape Town and the Western Cape Government get it right.

Keep it up, folks— and let’s all try and keep our roads safer for ourselves. But, more importantly, for our children.