by Donovan White (@DonoWhite) Is it me or is it a daily routine for the media to offend me and at least 45% of the 4.9m known gay, lesbian, bisexual or transsexual South African commuters?

It’s a bright and exciting time to be alive. Creatives need only to step outside to bask in the diversity. We’re in an age where we actually don’t need stock photography and ‘Shutterstock’ definitions of people, because it’s so vibrant and eclectic, and marketers are so conscious of how people are represented that approvals on Facebook creative are taking longer, just so we can get the right racial and gender balance. Yet it seems as if we LGBTI aren’t part of these ‘people to represent’ considerations in South Africa — unless we become the creative concept designed for ‘normal’ clients.

Sadly, my stomach churns every time I hear the radio ads where Harold’s twangy voice proposes straight men and women buying flowers and ‘choccies’ for every occasion, from Valentine’s Day to Father’s Day. It’s as if the voice is saying: “Trust me, I am an effeminate gay best friend; I know what works”. There’s also the well-known car brand using the vehicle’s “unbelievable” benefits to help a boy come out to his father. “That’s brilliant”, the brand’s managers must be thinking, “we are so brave and progressive.”

Are you kidding me? The one-dimensional stereotype is so obvious, coming at a critical time when these communities need to be accurately represented.

In 2012, Lunchbox Media conducted the world’s most-ambitious and largest LGBTI marketing census and study. I have yet to see something more comprehensive, but there are bouts of value in research done by the likes of The Other Foundation. Stats quoted here may have definitely increased since 2012, but it is worth noting 76% of SA LGBTs will support brands if advertised to them (instead of poking fun at them), 83% want more brands identifying with them, and 57% feel ignored as customers. So why would any brand want to offend them?

No wonder LGBTI media, such as Attitude or Instinct Magazine, clutch at straws and make a big deal of every two-second flash of a gay, lesbian or transgendered featured in ‘progressive’ advert content, from lesbians in Finding Dory to Beyoncé’s “All Night” and Axe asking if “it’s ok to experiment with other guys”.

That’s generally what we get: 2s and the stereotype of either being effeminate, sad, ‘a girl’s best friend’, theatrical, pedos or sex maniacs and predators.

South Africa, on paper, is the most-progressive African country with regards to LGBTI rights, becoming the first country in the world to prohibit discrimination in 1993 and the fifth country globally to legally allow same-sex marriage in 2006. The sad reality was proven by The Other Foundation, however. In real life, we may have seen a 10-fold increase in South Africans agreeing to marriage equality, and 51% of South Africans may believe LGBTs should have human rights, but 72% believe it’s morally wrong and 70% say LGBTs are “disgusting”.

While inaccurate perceptions of gay men, lesbian women, bisexuals and transsexuals are disseminated via the media, 31% of us is considering suicide and 21% has tried, according to The Other Foundation. So, thanks for the sensitivity, car brand mentioned above; while we’re trying to accept ourselves, 1% of the SA population says it will actively go out and hurt us, leading to a crisis such as ‘corrective’ rape of lesbians.

These are not the only things happening to us. Globally, only after an outcry has YouTube lifted its ban on LGBTI video content; gay men are currently being tortured in Chechen concentration camps (the first since World War II); and ISIS is throwing blindfolded gay boys off building rooftops.

With regard to LGBT representation, I generally see three types of creatives and marketing managers in South Africa.

Harolds and Kadrovs are ‘un-South African’. To be a Hendricks marketing manager, look to the likes of local soapie, 7de Laan, which aired the first same-sex kiss between Logan and Divan during prime time TV on 3 March 2017. The backlash from the SA public on Facebook and Twitter was horrendous but the show handled it like a pro, allowing South Africans to show their true colours on a global platform.

There are tonnes of examples of brands doing it right globally but few in SA, such as the Google Home advert, Nike’s #WeBelieveInThePowerOfLove, Coca-Cola’s ad where brother and sister hilariously fight for the pool boy and Dove’s advert showcasing a transexual mother.

For the marketing manager seeing the value of the LGBT market and seeking to be a Hendricks, I have four personal recommendations:

On the flip side, it is time for the LGBTI community to come together and accept the love of each other and those unlike them. The Other Foundation found that religious groups in SA are the most-accepting of us. If we want the country to stop stereotyping us and let us in, then we need to do the same. A lot of this, and a lot less body shaming and racism within the LGBTI community, will go a very long way!

Love, after all, is love.

Disclaimer: This article was inspired by Harold and written because I have a love for those brilliant creatives who make amazing work beyond his dated creation. Their great work at One Show proved they can take the brand to greater heights without him. 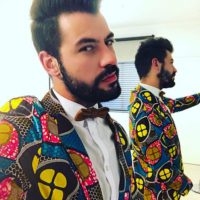