Ad of the Week: Adsman sells the value of news

A universe where you didn’t know that the CEO of Volkswagen — Martin Winterkorn — had fallen on his sword (metaphorically, of course), because of revelations that VW installed software in its vehicles in order to disguise its cars’ carbon emission levels.

Just imagine that you didn’t know that the Springboks had beaten Samoa in the Rugby World Cup, making up for their humiliation at the hands of Japan. Or that you had no idea what the fuss was about this Nkandla thing, or — well, you get the idea. 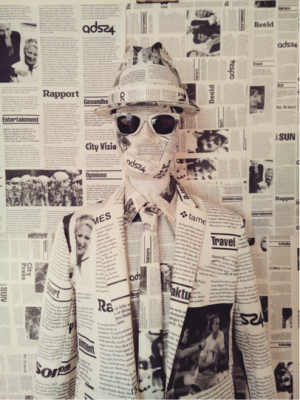 A central part of our lives

News is a central part of our lives because journalism plays the critical role of informing us what goes on in society. More importantly, news media are the ‘fourth estate’. Journalism plays a critical role in keeping an eye on government (and business) while reporting about abuses, excesses, corruption and wastage that erode democracy.

Despite the important role that news plays in our lives, news brands have had a real struggle to communicate their value to marketers. Print news has largely experienced a drop in circulation that has affected advertising, while online journalism has struggled to make advertising pay for quality journalism.

Which is why Media24.com’s new campaign really hits home with me, and why I’ve chosen it as this week’s Ad of The Week. This new business-to-business campaign educates and promotes the value of advertising in Naspers’ news brands, while promoting Ads24.

In short, Ads24 is the sales and marketing division of Media24, and is responsible for the sales of advertising solutions across over 100 newspaper titles and digital platforms that include City Press, Beeld, Die Burger, Volksblad, as well as the plethora of other national, regional and local news brands that Naspers owns.

The campaign, created by Sunshinegun (Ads24’s creative partner), introduces a character called Adsman. He is a normal guy, except for one thing — he appears to be made entirely from newsprint. From the tips of his shoes to the top of his hat (including his face), Adsman is pure print journalism.

Adsman can be seen enjoying a braai with a normal family in the TV/YouTube video that supports the campaign. The message is: “There’s nothing that goes better with a Sunday braai than Sunday news. Be there — Ads24.” This is the first message in the campaign, that promotes the importance of Media24’s Sunday papers — and as part of this Sunday focus, Ads24 is offering a Sunday Combo Community solutions offering, which spans across Rapport, City Press, Sunday Sun, Son op Sondag, and Ilanga LangeSonto, its digital properties, mobisites and Netwerk24.

The campaign is also supported by a custom publication that goes out to all the media agencies, called The Beat. This is a print publication in the format of a newspaper that draws on the group’s editorial resources to examine the state of the media and address issues of interest to advertisers and marketers.

Explains Marise van der Lith, creative project manager at Ads24, “We want to communicate in a memorable, fun and informative way to trade. Our message is that we have a special relationship with our readers and communities. We want to convince them that we can bring their brands to this same special place that we share with our communities. A type of magic is created in a scene when Adsman is completely welcome and comfortable amongst normal people.”

A type of everyman

Van der Lith describes Adsman as a type of everyman: “Adsman is ever present. Newspaper readers might not literally see him, but he is always in the picture. He is sociable, influencing, empowering and adaptable, sometimes serious, sometimes quirky but mostly entertaining. He is the life and soul of the party. He is tech-savvy. He is an explorer. He is the thread that weaves our nation into the rich tapestry that is ‘us’. “

The campaign also uses digital channels such as Facebook, Twitter and Instagram to promote Adsman’s place in the media world. There is also the possibility of seeing Adsman popping up at key events in SA.

“We want to communicate in a memorable, fun and informative way to trade. Our message is that we have a special relationship with our readers and communities. We want to convince them that we can bring their brands to this same special place that we share with our communities. A type of magic is created in a scene when Adsman is completely welcome and comfortable amongst normal people,” she continues.

“Adsman represents newspapers which are the conversation piece of millions, and by association so are brands that advertise in Ads24 newspapers. Adsman is popular guy. He has 37.6m friends (total adult population of SA). He is quite the family man with 17.6m relatives (the total Ads24 readership). Adsman is the ultimate South African citizen and he lives in the hearts and conscience of ordinary SA communities through each word and picture in a newspaper.”

What a clever idea to remind marketers of the value of Media24’s news brands! More so, it is smart because it reminds marketers of how important news journalism is to our lives. Well done to Media24, Ads24 and Sunshinegun for a well-considered campaign.