Ad of the Week: Suzelle meets Nataniël at Checkers

by Oresti Patricios (@orestaki) I can’t always say that our choice for Ad of the Week is a ‘slam dunk’, but this week there’s no doubt. Checkers has scored a massive win by pairing its brand ambassador, Nataniël, with new local YouTube sensation, ‘Suzelle’ of Suzelle DIY.

Singer/songwriter/actor/producer Nataniël, known for his acerbic take on society and the world in general, has been part of the Checkers campaign for several years, adding his particular style of offbeat humour to the retail outlet’s branding message.

Suzelle, host of web series Suzelle DIY, has been steadily building up a following on YouTube since May 2014 with her amusing and occasionally instructional tips for everything, from slicing tomatoes more efficiently and how to make a pizza out of cauliflower (starring Tim Noakes) to using a bicycle to power a spit-braai and how to make a loadshedding survival kit.

Both characters fall into a self-effacing genre of humour that one could call “awkward/cringe/ironic”. This kind of funny-bone is unique to South Africa, and very distinct from the ‘cringe’ humour of Britain or Australia.

Nataniël is all eye-rolls and camp observations, while Suzelle is wide-eyed naiveté, and makes frequent use of non sequiturs, fake smiles and awkward pauses. Together, they are a match made in heaven (or somewhere close by). 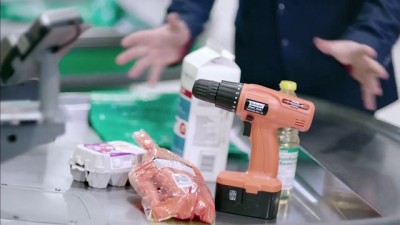 For its new television commercial, Checkers has come up with a simple vehicle to star the two. In one short scenario, Suzelle is at the Checkers till, purchasing a few everyday items (including a cordless drill…), when she looks up to see Nataniël.

“Nataniël — I didn’t see you there!” she exclaims.

“Clearly that’s not all you didn’t see,” he replies, pointing to her basket of eggs, milk, carrots, sunflower oil and cordless drill, adding, “Come with me.”

Magically, they are transported to the wine section, where Nataniël informs Suzelle that Checkers stocks over 50 wines of the world. She takes a sniff of the wine she is holding and declares: “I love a Bordeaux.” Of course, being Suzelle, she pronounces the word as “bored-oaks”. 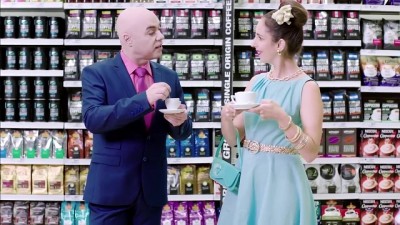 Nataniël responds by giving the camera a sarcastic look.

Next, the odd couple are at the cheese counter, where Nataniël presents Suzelle with a selection from “over 400 of the world’s best cheeses.” At the coffee aisle, Nataniël announces that Checkers has “10 of the world’s finest single origin coffees.”

“Grazie,” says Suzelle, adding, “Italian,” which earns her another eye-roll from Nataniël. She’s about to take a sip from the coffee, when she is magically transported back to the checkout.

“They’ve searched the world for you, Suzelle,” says Nataniël. “All you have to do is visit the next aisle.” Then Nataniël adds, in his inimitable way: “Ek watch vir jou” [“I’m watching you”]. The final flourish is his trademark finger-wag.

The payoff line in text on the screen is “More than you expect, for less than you think.” 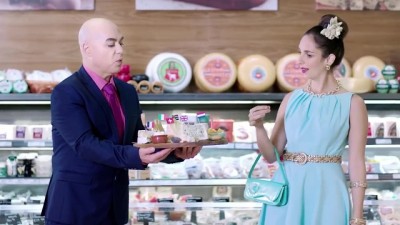 As with one of the previous Checkers/Nataniël pairings, when celebrity chef Gordon Ramsay was brought in to extol the virtues of the Checkers butchery, this ad serves both to entertain and inform.

Checkers is generally considered to occupy the more upmarket space of South African supermarkets, competing with the top-end outlets of Spar and Pick n Pay. While some of its ads focus on current ‘specials’, the Nataniël ads are more about the quality of the ‘gourmet’ products available.

The ad was conceived by ad agency Ninety9cents, and produced by AFS Productions under the direction of Brin Kushner. The ad has been viewed over 260 000 times as YouTube video and over 86 000 as a Facebook video — and that’s in just over a week. One may also watch two blooper reels (part one and part two), which have also garnered roughly 160 000 views between them. [There’s also a trailer with over 12 200 views — ed-at-large.] 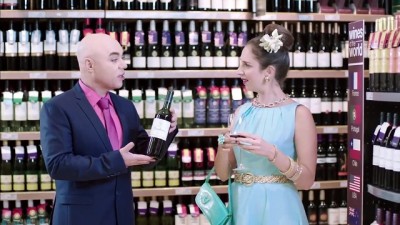 Checkers marketing director, Neil Schreuder, told me via email that signing Suzelle (as played by Julia Anastasopoulos [who also starred in Joe Public’s Cannes Lion-winning “The Notebook” TVC for Dialdirect — ed-at-large]) is part of a strategy to appeal to a younger generation of shoppers. Says Schreuder, “Checkers is embracing the digital revolution as more of our customers migrate to digital platforms. With this commercial we managed to merge the online world with the offline world in a seamless way, with the ad having literally catapulted Suzelle to the big(ger) screen and made a YouTube sensation out of Nataniël.”

A stroke of genius

Matching Suzelle up with Nataniël is a stroke of genius, and we can only hope there are more of these encounters planned for Checkers in the future. This is classic South African comedy, and the kind of thing one may send to friends and family overseas to make them even more homesick than they already are. 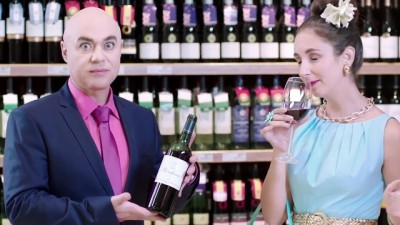 Thank you, Checkers and Ninety9cents, for making our day with an ad that makes us laugh every time we watch it. A true ‘Seffrican’ classic!

Cheers to great work from Windhoek and MarkLives.com!
Windhoek loves pure genius like it loves pure beer and will be dropping off a drink at this week’s winning agency so the team may celebrate in pure style!

Brewed over 21 days, under the expert eye of master brewer Christian Mueller, Windhoek adheres to the ancient Reinheitsgebot law, literally “purity of beer”, which was implemented in 1516 when the Duke Wilhelm IV of Bavaria announced that only barley, hops and water were to be used.