Ad of the Week: Seeing around corners

by Oresti Patricios (@orestaki) I am always excited by imaginative uses for billboards — those outdoor adverts can be nothing more than visual clutter but, when used properly, are immensely effective.

And this is definitely the case with the Lexus Adaptive Headlights billboard created by FCB Cape Town for a high-visibility location at Cape Town International airport.

Lexus is a luxury-car brand best known for its hybrid technology that, it is claimed, “produces 70% less smog-forming emissions than the average new vehicle and a reduced CO2 output”. As a luxury brand, it also boasts several innovative features, one of which is the smart headlight technology that reads the road ahead and turns the headlights to compensate for curves in the road.

To illustrate this using a billboard, FCB Cape Town adopt a technique known as inverse or reverse perspective.

Now, perspective has been used since the Renaissance to depict three-dimensional spaces on two-dimensional surfaces. We’re all familiar with the converging lines of a railroad track or road as it recedes into the distance —I can still remember an art class in school where we had to draw a street scene with a vanishing point, all the buildings and so on following converging lines into the distance.

Realistic images are called ‘trompe l’oeil’ (literally “deceive the eye”), and there has been a resurgence in popularity recently, with streets seemingly turned into rivers or canyons by artists.

Reverse perspective, as used in the Lexus ad, relies upon the same principles, except that by printing the picture onto a shape that is physically opposite to the perspective of the picture, when the observer moves around, the entire picture seems to shift towards the observer. In this case, the picture is printed on a pyramid shape which protrudes from the poster, with the vanishing point of the picture at the apex of the pyramid.

The image of a tree-lined road used in the ad, with its clear perspective, is ideally suited to this sort of treatment. The billboard has been placed on a curved road at the airport to enhance the effect for the observer. As one drives past it, the image seems to shift, revealing more of the road as one moves past it. It’s a pretty eerie experience, and it’s enhanced by the internal lighting in the billboard, which focuses one’s eye in on the lights on the road. 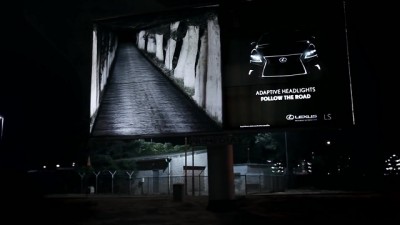 On the right hand side of the billboard is a product shot of the Lexus — very dark, as if shot at night, just the emblem and the lights emphasised, with the payoff line “Adaptive headlights follow the road.”

What’s remarkable about this advert is how cleverly it displays the product feature — the Lexus’s adaptive headlights. By looking at, and engaging with, the billboard, you just get this. You get exactly how beneficial those Lexus headlights are.

Advertising that’s high in information value is always a boon, but there is also an entertainment factor and word-of-mouth factor in this campaign. I, for one, have spent more than a couple of hours trying to figure out the engineering and the science behind the making of the billboard. Even though I know the logic of inverse or reverse perspective, it’s mind-bending to see it at play in this ad.

What a clever way to put the headlights on a feature that differentiates the Lexus, and that everyone’s talking about. Just check out Twitter:

love this billboard execution by Lexus for adaptive headlights. The angle of the image moves as the cars pass by. https://t.co/hjXXreydyf

Here’s to those bright sparks at FCB Cape Town — what a simple, elegant treatment for what is a very, very smart campaign.