Ad of the Week: When you talk to me, it’s pure electricity

by Oresti Patricios (@orestaki) In this, the age of Siri and Google Now, we are becoming increasingly used to interacting with machines with artificial intelligence (AI). But because this is an emerging novelty — the internet of things isn’t in full swing yet — there is still a degree of novelty and fun associated with this technology.

In an online activation campaign for the new BMW i3 electric car, NATIVE VML has built a dedicated microsite (www.bmwi3.co.za) that targets a niche audience: the luxury-brand car buyer with a preference for ‘green’ and sustainable alternatives. The aim of the microsite is very simple — BMW wants to get people to book a test drive.

NATIVE VML’s idea has been to build AI into the website, making it completely different to all the other car-brand sites one finds.

When first arriving at the site, the visitor is asked for a name. Click on the microphone icon, and the AI will do its best to recognise your name. From then on, you will be addressed personally by the BMW i3. Voice-recognition software allows you to ask questions, which the AI interprets and answers using a synthesised female voice — the ‘voice’ of the BMW i3. Ask her what her range is and she’ll tell you: “My range is 130 to 160km. With the Range Extender, a range of 240-340km is possible.”

Ask her about safety, and the page will change to illustrate the carbon-fibre passenger cell that protects all occupants in case of an accident, while her voice will guide you through the information.

If you’re not sure what to ask next, there are some suggestions to click on, and the BMW i3 voice will talk you through her various features.

It’s all just this side of uncanny, as you talk to your screen and this slightly robotic voice answers back. But it is entertaining enough for you to find out more than you thought you would want to know about this electric car. There are also embedded videos showing various aspects, such as the manufacturing process of the carbon-fibre body.

Here’s a little ‘conversation’ that I had with BMW i3’s online brand:

Me: How much do you cost?
BMW i3: I am available from R525 000.
Me: Wow. Isn’t that expensive?
BMW i3: I think you’ll find my long-term running costs quite economical.

Hybrid cars have been around for a while, but purely electric cars have only been placed on the South African market recently by major manufacturers, as a ‘green’ alternative. While these car brands have received acceptance among the ecologically conscious market overseas, there is a certain amount of buyer scepticism locally. 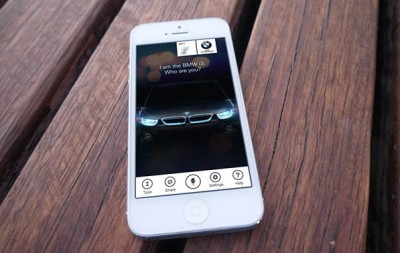 Electric car brands are perceived as slow and impractical. They have a relatively short range, and will always rely upon an electricity source, so given the situation with Eskom, South Africans haven’t necessarily been as keen as their European counterparts.

The idea of using AI to ‘humanise’ the car on this microsite goes a long way to breaking down some of that initial psychological resistance to the idea of an electric car.

To add a little fun, the AI was given some semblance of humour. For example, if you ask her to marry you, she will suggest that take her for a test drive first.

The microsite provides something of a ‘human touch’ to the process of finding out about the car, and NATIVE VML reports that, since the soft launch in March, the site has attracted more than 18 000 unique visitors with a conversion rate of 4%, and 728 test drives booked.

So, at the end of it all, I feel like I’ve had an entertaining time with a sexy-voiced robot.