Ad of the Week: The great banking switcheroo

by Oresti Patricios (@orestaki) Digital advertising is becoming increasingly important in the world of advertising, and the reason is obvious. What are we without our mobile phones, our tablets, our computers or our connected TV screens? But there’s another digital screen that people use very often, and that advertisers overlook.

Innovative use of ATM screens

This week I want to focus on the innovative use of a screen we’re all familiar with — but that has largely been ignored by advertisers. Yup, I’m talking about automatic teller machine (ATM) screens.

One of my bugbears is being charged extra if I use an ATM from a bank that’s not my financial institution. Lately, banks have been putting messages on ATM screens, warning customers of this additional fee. But when it’s late at night, or if you’re on the road at a garage, convenience forces you to grit your teeth and make that withdrawal.

The point is that this space offers clever marketers the perfect captive audience. You’ve got to look at that ATM screen, and there’s nothing stopping banks from using it as an opportunity to market directly to the visiting bank’s clients. It’s cheeky, but it’s not illegal. In fact, it’s damn smart.

This is exactly what FNB did with a campaign aimed to get clients to switch to the bank that calls itself “the most innovative bank in the world” after winning the 2012 BAI-Finacle Global Banking Innovation Awards.

FNB | ATM Switch from Gloo on Vimeo.
Here’s how FNB’s ATM switcheroo campaign works. When a client from another bank inserts her or his card into an FNB ATM, in addition to a warning message indicating that this person will pay increased transaction charges, a screen comes up offering the option to switch banks.

The great switcheroo campaign has a clear, clever line of copy that speaks directly to customers.

For example, an Absa client gets a message saying: “If your bank is making you see red with bank charges, switch to the bank with free card swipes, fuel rewards, and more.” Other messages play with the opposition banks’ slogans. 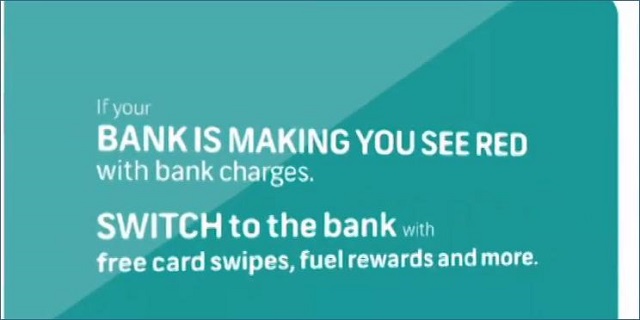 Banks have been criticised about their charges by everyone, from customers to the ombudsman for banking services advocate Clive Pillay and the national consumer commissioner Mamodupi Mohlala-Mulaudzi, for some time now.

In many developed countries, there is no ATM charge, particularly for ‘native’ transactions. But in South Africa, fees vary wildly from bank to bank.

A study done by BusinessTech last year found that a withdrawal of R1000 cost anything from R4 (Capitec) to R15.60 (Standard) at a ‘native’ ATM, and R7 (Capitec) to R22.30 (Standard) at other ATMs. Capitec is the only bank that has capped its fees at R4 and R7 for native and other withdrawals respectively. Which makes me wonder whether this is what accounts for the bank’s rapid growth in recent years.

FNB’s pricing strategy has been to keep its fees in the middle ground while offering incentives such as petrol rebates, cellphone and tablet financing and the eBucks rewards system. Recent research by TNS Global shows that, when it comes to switching current accounts, banks that offer rewards gain twice as many customers.

Getting customers to switch isn’t easy

But getting customers to switch banks isn’t easy. The TNS survey cited reveals that only 4% of consumers surveyed switched accounts in 12 months.

Another survey, this time by the US based advocacy group ConsumersUnion, reveals that one in five people consider switching banks, but don’t do so because there are so many obstacles holding them back. The report, called Trapped at the Bank: Removing Obstacles to Consumer Choice in Banking, shows consumers frustrated with fee increases want to change banking brands, but the perceived schlep of the administration involved in switching is what holds these customers back.

“Unfair bank practices and rising fees are prompting more and more consumers to consider voting with their feet and taking their money to another bank or credit union,” says Consumers Union attorney, Suzanne Martindale. “But many consumers don’t follow through because moving your money takes a lot of time and money and some bank policies make it harder than it should be.”

But let’s get back to the FNB’s great ATM switcheroo campaign. Once in front of the FNB ATM screen, if the person doing a transaction selects “switch,” she or is asked to enter his or her cellphone number for a personal banker to contact him or her immediately. And voila! An opportunity to make a sale directly with a customer who is dissatisfied with his or her current bank opens up straight away, resulting in a sales-driven campaign that’s very cheeky but effective. 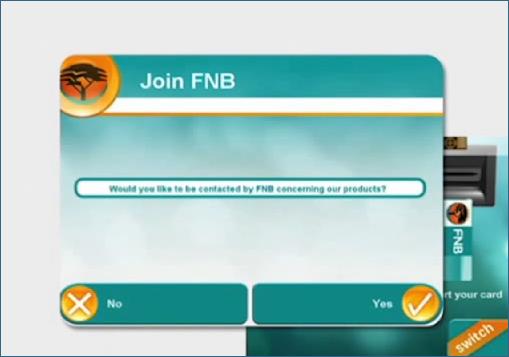 In fact, the campaign has been so effective that FNB claims to have gained over 19 000 leads in one month, which resulted in 1555 new cheque and credit card accounts being opened, and 3978 value-added product sales for FNB.

By using a media channel owned by the bank (ie the ATMs), FNB has been able to make directly targeted sales at a much-reduced cost when compared with traditional or online media. It has also been able to demonstrate, in a practical way, that it is a bank that’s in tune with its customers’ needs, and also shows itself to be innovative and proactive.

The clever campaign was conceived by Gloo — which has been chosen by the Financial Mail’s AdFocus as the digital agency of the year for seven years in a row. All hail to Pete Case and the team at Gloo!