by Gill Moodie (@GrubstreetSA)  RamsayMedia’s Getaway is updating its ethos to reflect a more sophisticated view of travel among the South Africa’s growing middle class – a move that the magazine’s editor, Cameron Ewart-Smith, describes as “a fundamental shift in the very fabric of our magazine”.

This also means that the iconic outdoor adventurer’s magazine that was launched in 1989 has been redesigned. You’ll see the changes in the 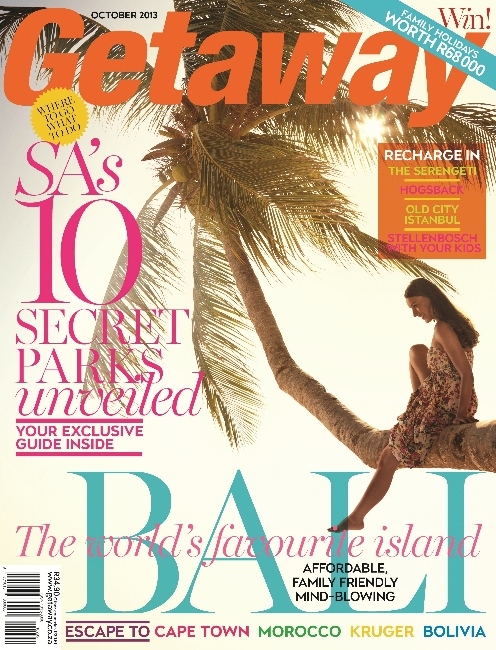 October edition that is already available in store. They  include a glossy, more sophisticated cover, bolder use of typography and pictures, more graphics and a brighter palette of colours.

Ewart-Smith told Grubstreet last week: “(The change) was borne out of looking at South African travellers and realising there is a much more diverse community of travellers than waspy, (national) park-going traditional Getaway readers.

“We’ve been pigeon-holing South African travellers into a vision of them that was probably born in 1989, when we started.”

So, for instance, the cover story of the October edition is Bali.

Ewart-Smith says that Getaway will also now strive to be more opinionated, for example, recommending THE best places to stay rather than giving a large range of options without any particular recommendations.

“Travel  magazines are not just about giving information,” he says. “They have to do a double job of inspiration and information so this new design and content strategy is very refined. It’s aimed at telling people the places they MUST go and the things they MUST see.”

By comparison, says Ewart-Smith, if you are looking for travel options via a Google search you are bamboozled by a ton of options.

“It’s too much to know. We’ve had a lot of soul searching and are investing more in more opinionated content so we can say: “Stay here”. Rather than: “You COULD stay in one of these hotels”.

“You can spend hours and hours on the web searching but our job is to make sense of it all and present to you the things that you must do. It’s not a competition with the web. We’re adding value.

“Our job as magazine editors – and it doesn’t matter what magazine you edit – is to surprise and inspire people on a content discovery journey. So it could be small upfront news piece in a magazine that you would never, ever have Googled – and it could be the best holiday of your life. It could be a multipage feature where you find the contact information (for the destination) in the article and you actually phone it.”

When it comes to advertising revenue, Ewart-Smith says that the  classified ads are down in travel magazines  across the board while Getaway’s gear advertising and upfront ads remain healthy.

“People page through the gear pages because they don’t know what they’re looking for. They’re on a discovery mission.” he says. “When it comes to destination advertising, most people have a pretty good idea where they are going… and you kind of go (and find accommodation, flights, etc, ) from there.”

Getaway’s website – which is a key part of Ramsay’s 360-degree multiplatform strategy – is doing very well, says Ewart-Smith, who is also online editor.

“We are winning on a number of fronts – and on the most important front:  audience. We’re on about 150 000 unique users a month now. We are growing every month and we are putting a lot of effort into that. The bookings are increasing steadily so more and more people are finding the usefulness of going online with us to find places to stay. And our own travel packages, which we are working on in collaboration with a whole lot of travel operators, are also doing well.

“It’s not winning any profit awards yet but I don’t think there are many content websites that are profitable at this point. I think it will be very profitable in the future and the vision is well thought through. It’s well understood where it can go. It’s a case of making sure that we don’t overspend in the short term and that we think cleverly the whole time.”

Like many magazines, Getaway’s circulation is down and the revamped mag is certainly an attempt to expand its target market.

“We are certainly not going to sit back and say: ‘Print’s over. No one’s reading it anymore’,” Ewart-Smith told Grubstreet. “We know people are reading – and they are reading quality content.

“It’s tough and you’ve got to work harder. People are buying fewer magazines and they are being more picky about what they buy – and they chop and change more.

“But having said that, I’m very positive about where our circulation will go… If you’d asked me about this in January, I would have said print is being killed by digital, and magazines can’t keep up. But in the last six month – with that soul searching, the analysing of data, looking at what people are saying and strategising  – I feel pretty confident saying: ‘Hang on a second. We have good products as magazines. We need to be better at telling people why they need to buy us. We need to be more exciting.’”