by Gill Moodie (@GrubstreetSA) The big story of the recently released Inflation Watch figures from Ibis Media Data Services for 2012 is the march of Naspers’ pay-TV giant DStv.

The media inflation figures – that measure the cost of reaching consumers by buying adverts in the media – go out to Ibis’ subscribers, which are mostly in the advertising and marketing industries. The data includes media delivery (performance in terms of print circulation, radio listenership and TV viewership) and value (the “Media Inflation Watch” or “MIW”, that is, performance versus the ad rates).

Bearing in mind that new weighting measures were introduced to RAMS and TAMS (that measure radio and television audiences) in the third quarter of 2011 so that the only real trend measure for these sectors is the Rate Index rather than the performance-linked MIW, Ibis said  that television ad rates were up by 1.82% . It also said:

“The pace of SABC’s rate increases continues to slacken (SABC 3 is in negative territory). The guys at eTV remain consistent. Thus Free-to-Air’s rates are up by 4.7%.…Over at DStv Media Sales the picture is again very different. In 2012 Q2 the rates for many of the packages were cut and/or additional spots provided. This carried through to to the balance of the year so as to enable a very buyer friendly -5.4% Rate Index over 2011.”

Mike Leahy, originator and owner of Ibis Media, told Grubstreet that: “The biggest trend (in the figures) is the march of DStv and whether they 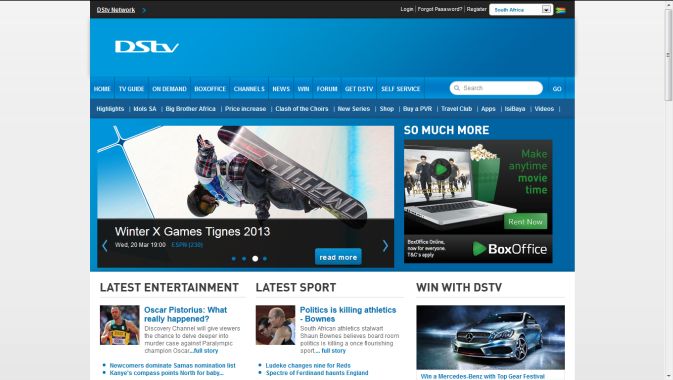 can sustain it. They are making very handsome profits if you look at (parent company) Naspers’ revenue space but not a great deal of that is from advertising… But they don’t actually need advertising, It’s a very nice cherry on top of a very handsome cake.”

In the last available full-year financial results for Naspers – for the year to the end of March 2012 – DStv netted 684 000 more subscribers in South Africa and across the continent to reach 5.6-million households in Africa.

However, the pay-TV firm could get to a stage when it might want to start optimising revenue rather than  turnover as the various DStv stations get to optimum on ads, said Leahy. “When that happens, we can expect some increases in rates and they will be justifiable.”

The Media Inflation figures’ tale that television – especially DStv – in the South African ad wars is an ever powerful more force is consistent with what consumer-magazine publishers say.

DStv – which sells a combination of ad packages and spots – has become much more competitive, said Leahy, because it reduced the price of packages last year and gave advertisers more spots in the packages.

“So it’s effectively a massive rate decrease. If we take BBC Entertainment, for example, the cost of a package was kept the same – at R90 000 – but in April last year they gave 60 spots in that package compared to 34 previously… They’ve got the availability and they want to sell it rather than filling it with promotions and the like.

For advertisers, this meant a large increase in the number of spots given for no extra money with a station with increasing performance as DStv continues to grow its subscribers aggressively.

“That is fairly consistent across the board (of DStv stations),” Leahy said. “The cost per thousand is still higher than free-to-air TV but it’s still very competitive compared to magazines and daily newspapers. If you look at the latest cost-per-thousand analysis, the cost per thousand in Q4 last year for a pay-TV station such as BBC Entertainment was close on R59 per thousand. If we’re looking at the average for consumer magazines, it was R119 and for daily newspapers it was R115. For weekly newspapers it was R88.”

If you’re an advertiser – especially an FMCG brand and you have a TV commercial made – there is a very compelling argument to go for the  DStv rather than print, Leahy said, “because you’re getting the niche audiences and you’re also getting them fairly cheaply”.

By comparison, print – where daily newspapers are hardest hit by circulation decline – the media inflation showed:

The Print media category is little changed since the last release of Inflation Watch,” said the release about the figures. “Circulation is continues downwards for many but not all titles. This is most notable amongst Dailies which put on +5.3% in rate but lost -9.45% in performance (circulation). This got them a +17.19% MIW Index (CPM).

Most of Media24′s dailies had a rate freeze. Thus Burger, which had a smallish circulation decrease, managed to come in at +4.6% MIW (CPM) Index. Herald and Isolezwe put on circulation.

In contrast the Independent’s Dailies Star and Cape Argus has lost heavily in the circulation race and delivered a +31.7% and +49.3% MIW Index (CPM) respectively.

Across all media sectors, the story is:

“Rates indicate a significant slackening over previous periods, largely due to a slowdown in the growth of TV’s rates. Remember there is no Performance reading for TV, Radio and Cinema. 2012 has yielded the lowest Rate Index since the analysis started back in 1986. It is the first time the Index has dipped beneath 4% (albeit only just). And in only 2 years has the Rate Index fallen beneath 5% – 2002 (4.67%) and 2009 (4.24%).”

Leahy said that TV comprises a large part of the index – about 46%.

Because of circulation decline, many newspapers are asking more (of advertisers as they put their ad rates up) for delivering less but  Leahy points out that if a title’s circulation is declining it doesn’t necessarily follow that its advertising value is declining by the same proportion. The title may be getting more targeted in terms of audience.

“Sometimes a lower circulation that is matched up with other factors can mean a better advertising buy,” he says. “All publications are niche publications so if you’re getting more of the niche that you want it may mean that, if the rates are held at a reasonable level, the value could be better.

“If there was one easy answer to declining circulation, then print-media owners would have fixed it but there’s a lot more to this,” says Leahy, pointing to six key drivers behind circulation decline: