Adelle Horler, content director at New Media, says the new site is a departure from the norm for a South African motoring brand, and aims to 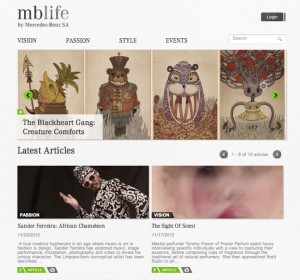 reflect the  lifestyle interests of current and future Merc fans  rather than have a focus on motoring. New Media also produces a print title for Mercedes-Benz and a digimag.

The new website takes the digizine further along its evolution towards a daily updated online lifestyle magazine. It is part of a strategy to engage with a younger, edgy audience and take the brand beyond those already driving a Mercedes.

Dylan Culhane has been appointed mblife’s editor. Culhane says content will focus on music, fashion, design, art, food, technology, trends and travel. The site will start with a feature a day and the focus will be on quality not quantity says Culhane. Horler adds that New Media treats the project the same as it would a glossy client magazine in terms of content quality.

Culhane has a team of freelance writers at his disposal. Mercedes-Benz will work closely with Culhane to distribute relevant content through its existing social media channels.

The content is SA focussed but Culhane expects it will have global appeal – SA culture has global currency through the popularity of its bands (like Die Antwoord), art and design.

The new site will be promoted through existing channels owned by Mercedes-Benz like its print magazine. Horler says the print magazine and new website remain separate projects but will supplement one another playing to the different strengths of online and print channels.

Culhane says the long term strategy for mblife is to allow Mercedes-Benz to build a closer relationship with a new generation of consumers. Mercedes has been shifting its product focus to more compact cars which appeals to that demographic.

New Media will look at partnerships with events like Fashion Week to promote the site and there is also the possibility of promoting it through other New Media platforms like VISI magazine.

Mercedes-Benz already operates a lifestyle focussed content site aims at the EU market. The site will carry no outside advertising.