The Bookmarks promises to grow up

by Herman Manson (@marklives) The Bookmarks Awards, the digital focussed awards evening, promises to be a much more settled affair this year, according to Bookmarks chairperson Nikki Cockcroft (@nikkicockcroft). In recent years the awards evening itself was better known for the general rebelliousness of its audience than for its role in showcasing stand-out work in the digital industry. 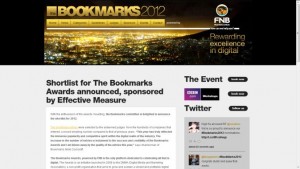 Cockcroft says she was especially pleased to see growth in the integrated campaign and social media categories this year.

The make the shortlist entries need to score 65% or more in the collated judging results. The number of entries that made the grade this year grew from just under 50% last year to 65% this year.

Cockcroft believes this indicates the increased quality of digital and integrated campaigns and is due in part to the discussion on what would qualify as a successful campaign moving from after the campaign to its inception stages. ROI and measurable results are becoming a real part of the advertising communication conversation.

The one category that turned out to be a bit disappointing in the number of entries received and the quality of many of the submissions was the mobile category, says Cockcroft, who says agencies are talking up mobile but seems to be falling short on delivery.

This year brands could submit work produced in-house into the awards. KPMG, Primedia Broadcasting and FNB all made the shortlist and interest in the event is expected to grow from companies keeping their social and digital strategies close to home.

The Creative Circle doesn’t count Bookmarks wins towards its point system, something anecdotal evidence suggests has impacted on entry levels at the Pendoring Awards which faces a similar issue. According to Cockcroft the Bookmarks Awards engages with the Creative Circle, but feel a focus on creative points misses the point of the awards which is driven by not only creativity but also use of technology, innovation and results. “Times have changed,” says Cockcroft, “and the industry is moving on and away from creativity as the primary focus for measuring success.”

The event itself will take place on the 1st of November 2012 at the Artscape Theatre, with the after-party hosted at Trinity nightclub. Previous events had plenty of standing room but this year attendees will be seated. Cockcroft promises the after party will allow for plenty of socialising.

The Bookmarks and its organisers the DMMA is looking to expand its footprint into East and West Africa next year with interest from trade bodies in Kenya and Nigeria specifically looking encouraging. The Award show has done a lot to raise interest and awareness of South Africa’s digitally work and it is hoped expanding the award into other parts of the continent will stimulate those markets as well.

Book your tickets for the Bokkmarks Awards event here. http://www.thebookmarks.co.za/
Don’t forget the Jozi and Cape Town workshops organised around event – entry is only R450.