Martin Lindstrom on Brandwashing and the consumer revolution

by Mandy de Waal (@mandyldewaal) Take a look at how angry consumers are getting in banks and what’s gone down in Wall Street. Seen a consumer revolution on Facebook or insurgence on Twitter lately? If you’re a big brand that’s been manipulating consumers for longer than you can remember, perhaps now’s the time to be nervous. Mandy de Waal speaks to Martin Lindstrom, author of ‘Brandwashed’ – a book in which the marketing guru turns the heat on his own industry, drawing on all he has witnessed behind closed doors to expose the psychological tricks and traps that companies use to get consumers’ hard earned cash.

Mandy de Waal: Consumers are taking action against greed and what they see as the perversion of capitalism. What does this mean for brands and branding? 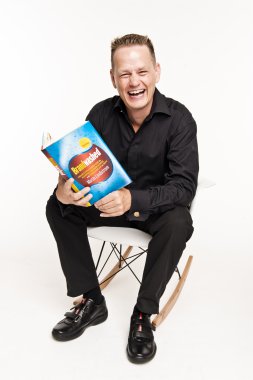 Martin Lindstrom: Brands should get their ‘house in order’ soon, rather than later. I’m convinced that we’ll soon see a Wikileaks of brands – some independent organisation that will disclose trade secrets and marketing programs from companies across the world without their permission. Many companies will “survive” this as there’s simply nothing to disclose – but some will be hurt greatly because they’ve crossed the line.

MdW: What was the motivation for ‘Brandwashed’?
ML: I’ve worked in advertising since I founded my own advertising agency at the age of 12. I’ve seen a lot – and at times become disturbed about what’s going on. Admittedly I’ve been part of this, and feel the time is right to put a line in the sand and push back on some of the techniques used. Had I written a book about ethics I’m sure no-one would ever read or write about it – so I had to write a provocative, thought provoking, edgy book which grabs people attention on both sides of the table. My hope is that the consumer gets a “wake up call” and realizes that they’re probably not as “immune” as they think they are. I also hope they’ll push back on some of the topics I’m raising in the book – like privacy – which (when you read about it) is rather shocking.

In terms of companies I hope the same – over the past months I’ve been on a road tour presenting for them a new set of 10 ethical standards. These are developed by the consumers not by me – but outlines what the “future” consumer hopes / expects from brands. Here’s the good news – all companies – all belonging to the biggest in the world – have bought into these guidelines – giving me a great sense of hope that things indeed can change. I’m fine about Brandwashing people – as long as it is positive – it is when it’s negative brandwashing I start to feel uncomfortable.

MdW: How have consumer relationships with brands shifted? Are consumers becoming more powerful?
ML: It all boils down to the computer and network revolution. Consumers have suddenly secured one big voice – so big that we simply can’t overhear it – and companies are increasingly becoming aware of this. In the future this will mean that consumers more and more will begin to take over the ownership of brands – this will mean that companies are giving birth to the brands but asking the consumers to grown and run them.

MdW: What are your thoughts on advertising intrusion, and why has advertising become so intrusive?
ML: Because only one thing counts – and that is growth. The concept is called obsolescence – let me explain: The first light bulb invented by Thomas Edison in the late nineteenth century could burn for 1,200 hours. Further developments in the technology of incandescence led to an improved light bulb that could last indefinitely. One only need visit the fire station in Livermore, California to see a light that has glowed continuously since 1901, and still burning. Today, you would be hard-pressed to buy a light bulb anywhere in the world that will burn for more than 1,000 hours.

Obviously, a light bulb that never burns out is not good for business, and so at this fateful meeting, the notion of built-in obsolescence was born. It has been defining our lives directly and indirectly ever since. Buy a printer, for example, and it will stop after 100,000 pages. It’s controlled by a microchip, which if hacked, can at best, add another few hundred thousand pages to the clock. The same applies to fridges, vacuum cleaners, clothes dryers, cars, and of course the first iPod that hit the market in 2001. Products that run on irreplaceable lithium batteries will not last forever, and the need to replace what has become essential electronic items keeps the wheels of consumption happily turning.

All that said – as a new brand is born every second across the world, as we’re watching in average 8 hours of TV commercials 7 days a week for 6 years I don’t need to tell you that the firze competition means more aggressive methods. As growth is the engine – marketing is the fuel. Yet in the desperation to secure growth some companies are going a bit too far, forgetting the importance of ethics – and this is where I am pushing back.

MdW: You consult to brands like Microsoft, Coca-Cola and Disney, yet you’ve written this tell-all book about how brands manipulate people for market share? Isn’t there some cognitive dissonance in that?
ML: If you want to change the world you have to work with and not against people. Over the past months I have with great success managed to introduce a set of new ethical standards – the good news is that all companies have bought into these. I’m sure they do this because they really believe it – but I’m also sure they do this because they feel a sense of pressure – perhaps partly fuelled by me and my book. People from outside the industry can’t say things like what I did in the same credible way – not that they’re not credible – but working ‘behind the scenes’ is an advantage. That’s not to say that I’m going against brands – I love brands – but I also know that if they don’t get their house in order there’s a major risk that they’ll soon fail due to the increase in transparency and community bonding among the consumers.

MdW: Please share one or two of the anecdotes you reveal in this book?
ML: I was surprised to learn how one of the most popular lip-balm brands of all time called Carmex infuses an addictive ingredient –that eats up living tissue when used –to generate a new level of brand addiction.

Did you know that some supermarkets are designed in such way that we walk counter-clockwise – making us buy more – 6% more. Or that the latest invention is “speed bumps” making us slow down our shopping cart and … yes spend 6% more.

MdW: Fear is a strong theme in marketing. Why and how is it used. What are your views of this kind of marketing?
ML: We estimate that 35% of all communication today builds on fear – and it’s grown because fear is contagious and addictive. Fear is used everywhere from the hand sanitising products to fear of being alone, fear of getting sick, fear of looking fat, thin, pale, fear of having yellow teeth…

My views – it is a fine balance – some time it is acceptable to use fear – most time it is not. It all depends on the category, the purpose, and the context.

MdW: Which brands are the most powerful in the world from a word of mouth perspective, and why? What makes them so popular or influential?
ML: Apple, Google, Facebook. Google has still not advertised Gmail yet it is one of the biggest email servers in the world. I think it tells it all.

MdW: There are strong calls for reform in capitalism. Do you believe we need new models of marketing? If so what lessons do we need to learn about branding to recreate more sustainable and ethical models of marketing.
ML: Yes I do think we need some new models – here’s my ethical guidelines: http://www.martinlindstrom.com/ethics/