Media corrections and our social reputations

by Herman Manson The modern news cycle has been diminished to a matter of minutes — even less on services like Twitter. And it seems to just keep speeding up.

As newsrooms become increasingly hard pressed to produce news content quickly — very quickly — they find themselves facing an audience that demands near immediate reporting on events and expects that reporting to be factually correct.

But journalists make mistakes too and maybe as a profession it has sold itself into the ‘we are relevant because we only publish the facts’ corner too effectively. ‘You can trust that we will be transparent in how we publish news by declaring any conflict of interest, by upholding journalistic standards and by publishing corrections when me make mistakes’, is maybe the best we can promise.

Publishing corrections is a near every day function of any news organisation. Newspapers publish notices in their pages, but of course the original story remains published and in the public domain, for posterity, or until the last copy of the paper makes it way to the fish and chip shop.

On the web newspapers have adopted various approaches to dealing with corrections. The New York Times maintains an  index of corrections, adds a note to the story declaring that an aspect of it has been corrected as well as showing the affected sentence with the changes made for easier identification at the end of the story. 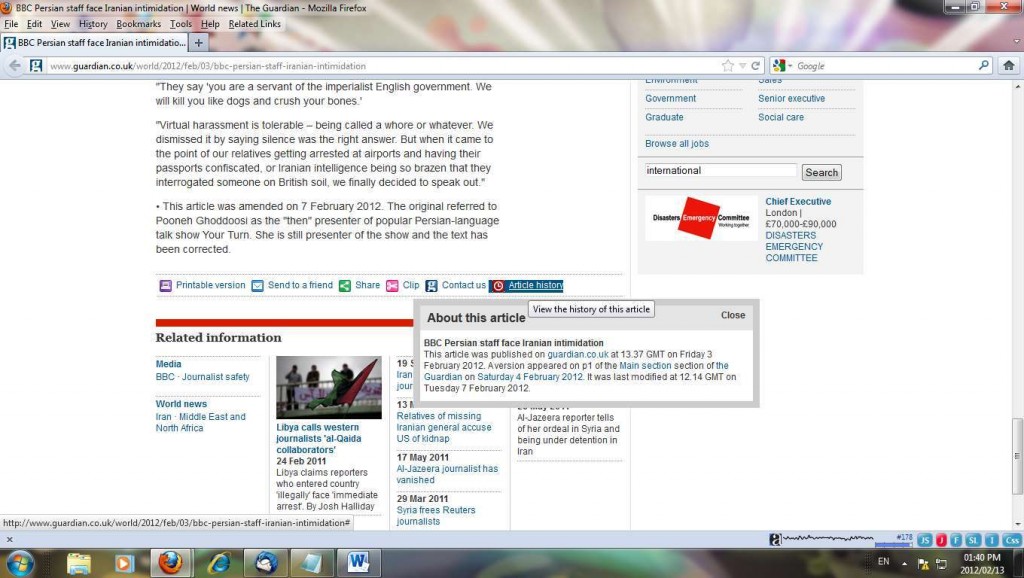 Of course, sometimes a story is fundamentally wrong, so much so that no correction can set it right, and it is withdrawn. In print, the editors publish their withdrawal, and usually the reasons for publishing the incorrect story in the first place, as well as the steps they will take to ensure future errors get caught in time.

Online, however, the inclination to hit ‘delete’ runs strong. In 2010 the Huffington Post published a story headlined “Could The 2010 World Cup Be A Disaster In the Making?” At the time sections of the pony press were running wild tales about darkest Africa and the nightmare that awaits visitors to the 2010 FIFA World Cup which South Africa hosted, as it turns out, quite successfully.

According to the Huffington Post story by Jeffrey Hoffman, “most would agree that three of the major venues, Johannesburg, Durban, and Capetown [sic] are cities where lawless mobs run rampant and threaten both classes on a regular daily basis.” That was the second draft of the story by the way — the original described the supposed lawless mobs in more detailed terms – but it got edited out after at least one reader posted his outrage in the forum below the story.

Hoffman also suggested concerned readers Google the Johannesburg Times, a newspaper that does not exist, for more on the horrors visitors would be subjected to.

The noise the story caused on social networks like Twitter prompted the editors at The Huffington Post to rethink the column in its entirety and it got, not retracted, but deleted. Just like that the content was gone, without explanation, no reasons given. Only after the matter was raised directly with the editorial team at the Huffington Post was the following  statement posted in place of the original column: ‘Editor’s Note: Jeffrey Hoffman’s post, “Could The 2010 World Cup Be A Disaster In the Making?,” has been removed due to factual inaccuracy and inflammatory language.’

More recently, a two line statement by the South African Reserve Bank caused not only a mild panic on the local financial markets but also caused the widely respected Mail & Guardian Online, sister site of the similarly titled weekly newspaper, to publish a story based on speculation as to the reason behind the bank’s announcement, then to delete it without proper notice given as to the reason for doing so, and finally to replace it with a different article that does not acknowledge the errors made in the original reporting. 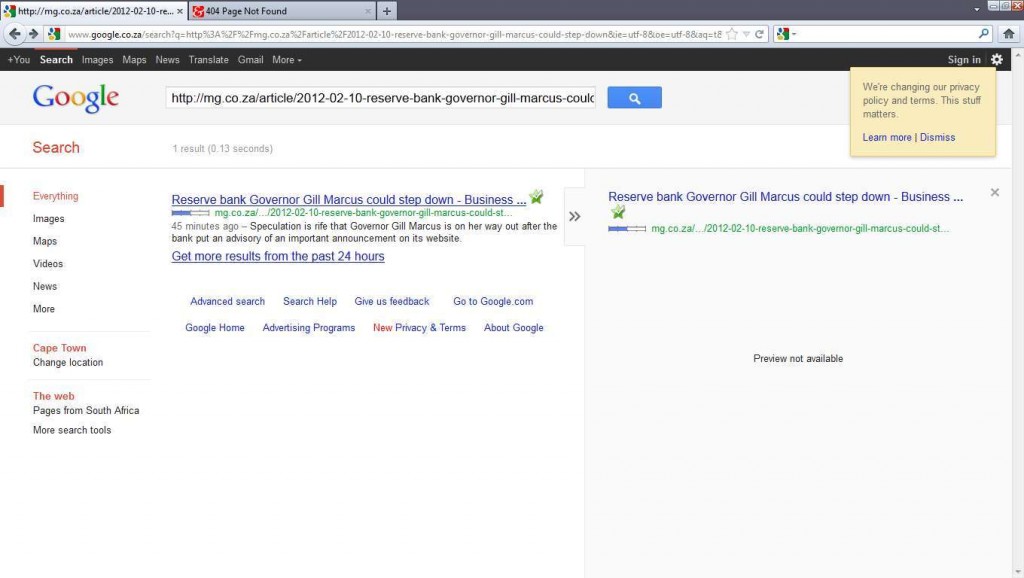 Originally headlined ‘Reserve Bank governor Gill Marcus could step down’ the story was soon replaced with another titled ‘Reserve Bank’s Gill Marcus not stepping down’ (note both make use of the original URL /article/2012-02-10-reserve-bank-governor-gill-marcus-could-step-down/). The Mail & Guardian also used its Twitter feed to announce the possible resignation of Marcus, plus a link to the news story, which was retweeted multiple times by its followers (it’s a trusted news source so why not). The tweet disappeared shortly after.

At least the Twitter account offered an explanation for pulling the story — ‘Apologies, we’ve provisionally withdrawn that last story while we clear a few things up. Please disregard until we repost.’  Mail & Guardian editor Nic Dawes also tried to calm nerves by tweeting “Right. Everyone calm down. There’s nothing terrible, dramatic, or market moving happening at the Reserve Bank.” 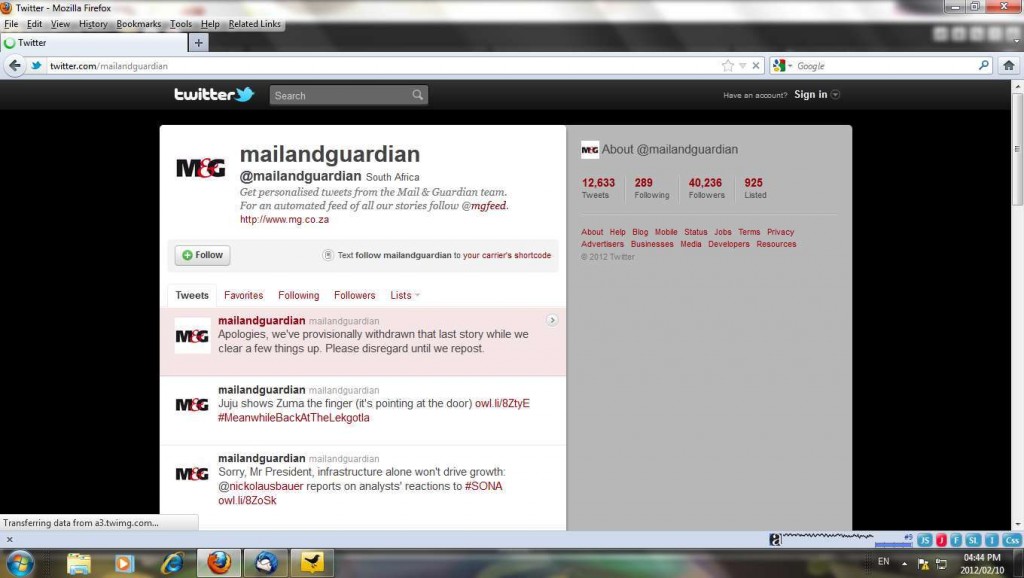 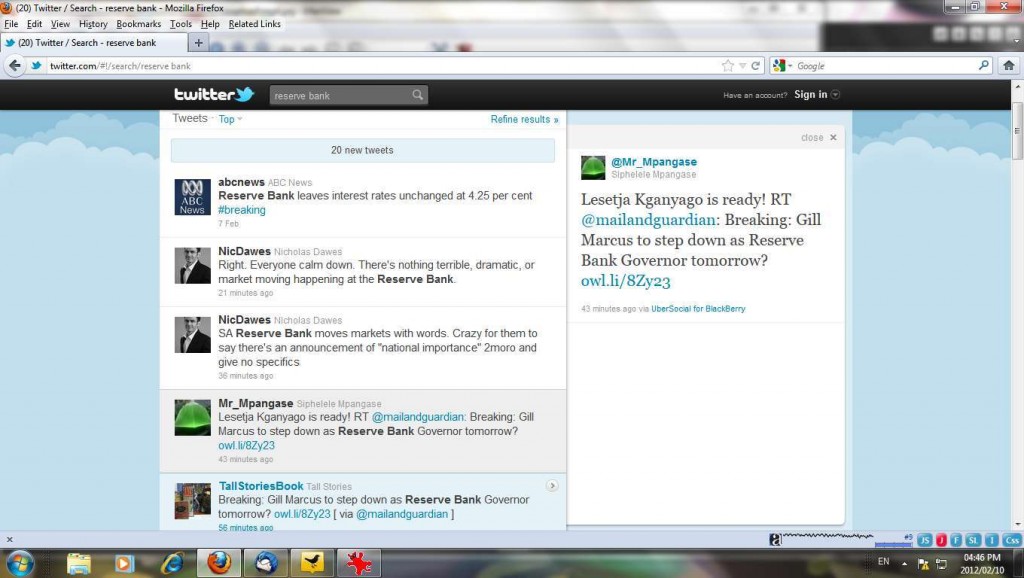 The website simply gave the error message ’404 page not found.’ 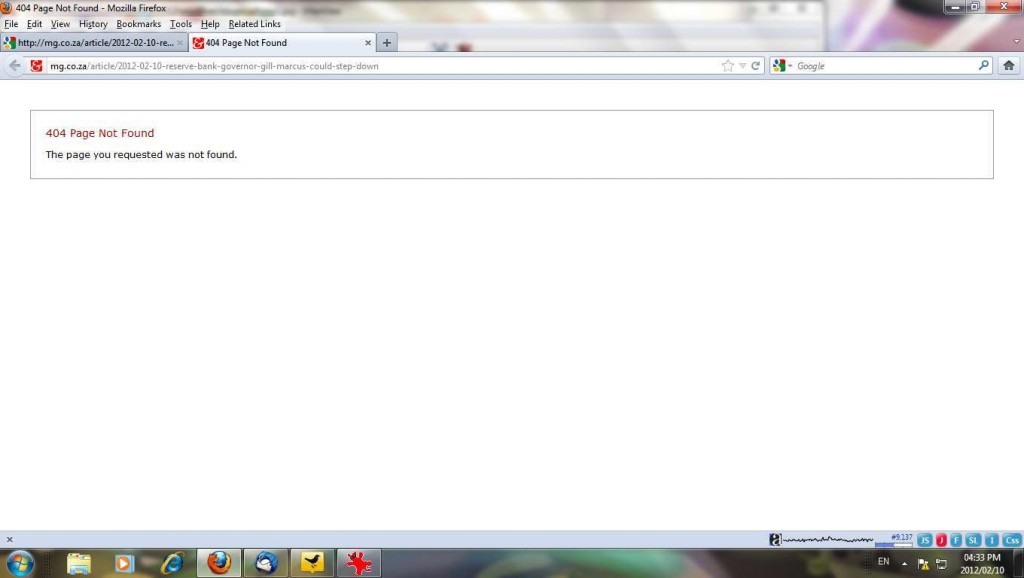 Once the replacement story was up no acknowledgement was made of possible errors in the previous article, no notice was given that the original story had been taken down, or that it was replaced with a second updated version. A version that, as evidenced by the change in headlines, told a rather different story.

There is nothing wrong with, to borrow a phrase by Poynter, reporting the truth as it develops. The issue is that while the Mail & Guardian Online rectified the original story, it did not do so in a way that was either transparent or accountable to their readers.

The BBC News website in June 2011 reported on a dog condemned to stoning in Jerusalem. It was followed a few days later by a denial published as  Jerusalem court denies dog condemned by stoning. The editors at the BBC had decided to remove the original story from the website, but did so while publishing a proper explanation of their decision.

This is a much more useful approach to deleting content, which on news sites should be the last option available to editors. Readers know what’s happening to the content on the link they followed through some social media platform or another and it alerts them that there are factual issues with the original story, something they can feed back to the sources they followed to the removed story.

It seems appropriate that if news organisations are going to rely on readers spreading and promoting their content, they also offer those same readers a chance to realise when the news they are posting onto their Facebook pages and retweeting contains errors, after all, it’s their reputations on the line as well.