So you want to start a magazine. How far do you think R1500 will take you? Quite far, it seems, as Sean O’Toole brings you a true story about the impossible. 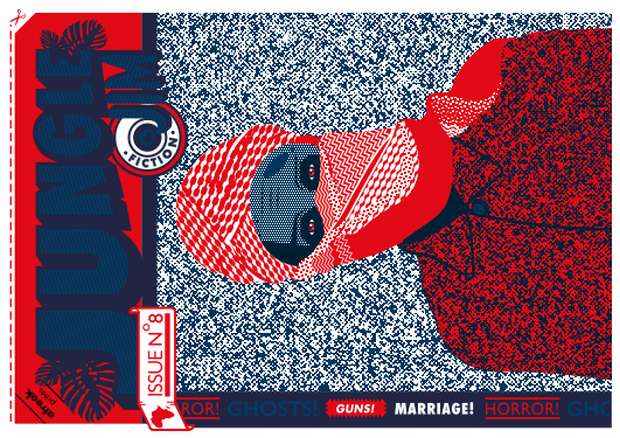 And another from issue two: “Tall, broad shouldered men with red, bulging eyes and faces that might have belonged to criminals came wearing bullet proof jackets with Special Anti-Robbery Squad written on them.” And here are two sentences from issue three: “I sped out of Spruitview and through Katlehong like a lunatic. How many yelping stray dogs and shocked old ladies I missed by inches is a tale best left untold.”

This is the story about how the magazine that published these sentences came about.

“We were talking about it yesterday,” says filmmaker Jenna Bass. She is seated next to illustrator and designer Hannes Bernard. We’re on the first floor of a retrofitted warehouse space on Hope Street, near the infamous Stags Head Hotel in central Cape Town. It’s a Wednesday. Jenna: “I remember coming to the office one day…” Hannes: “That was the start of it, getting this office last year.” Jenna: “I came in – I think I had a really frustrating day – and I was just like, ‘Hannes, let’s start a magazine!’ And he said, ‘Yes.’ That’s how I remember it, but Hannes doesn’t remember this at all. I think it was just one of those days when I was thinking about something that I wanted to buy but wasn’t out there.”

Typically, publishing is an onerous enterprise. It involves convoluted business plans, advertising staff, distribution agents, subscription drives, contributor contracts and other boring necessaries. Literary publishing, however, is to a degree freed of these imperatives. Not many people are interested in fiction, the literary sort less so than the fast-paced pulp variety.

So, print runs of these little magazines (essentially the hothouses for future talent) are small. Cold calling at two or three favourite bookstores usually sorts out distribution. And word of mouth, which nowadays includes whisper networks like Facebook, helps spread the good news. “Ja look,” says Hannes, who used to work with designer Peet Pienaar before going solo, “we made a decision early on that there isn’t really a good reason why this should exist. If you look at it from a business or publishing perspective, Jungle Jim doesn’t really make sense as a venture. But we decided we would completely disregard that, and it wouldn’t be a choice ever whether it makes sense to do this or not.” “Ja,” agrees Jenna, an AFDA graduate who created a splash with her 2010 short film The Tunnel. “So we just find a way of doing it.”

“We also knew that the second large amounts of money became involved, we would just get discouraged – we’re not good with money. We thought the only way this would work is if we actually have a small amount to get it going.”

“How much did you put into it?” My question makes Hannes and Jenna laugh. Hannes: “We came up with an amount we could both pay per month. Basically, it was how much money we could lose per month.” Jenna: “Which was obviously not very much, because neither of us has money to throw around. It was a little, not much.” Hannes: “Very little.” Jenna: “A small amount.” Hannes: “Very little.” Jenna: “A really small amount.” Hannes: “Much less than you can imagine.” “Like two or three zeroes?” I push. Hannes: “Our original budget was about R1500 for ten months.”

For their launch issue, the Jungle Jim duo produced 200 handmade copies of their A5 magazine. The unbound launch issue of the biweekly featured the work of cartoonist and lyricist Nikhil Singh, filmmaker Richard Stanley, Somali writer Abdul Adan and Ghanaian novelist Kwei Quartey, whose detective fiction is set in Agbogbloshie electronic dump in Accra.

This “notorious slum”, as Quartey describes it, is also the subject of photographer Pieter Hugo’s most recent photobook, Permanent Error. To announce the new birth, Hannes and Jenna organised a reading at Book Lounge, Mervyn Sloman’s energetic independent retail store on Roeland Street. Singh read his pirate story (“Eyes like foglights, calling in all the lost ships of the soul”) and an actress read a piece by Kola Boof, a former model-actress said to be the mistress of Osama Bin Laden.

The launch issue was quickly snapped up. “I think a lot of people didn’t pay for them,” sighs Jenna, admitting to a problem that perplexed the publishers of Tessa and Kid Colt a generation before.

Founded in the mid-1960s by Hint and Boet Hyman, two Kimberly farmers turned publishers, Republican Press is a name synonymous with South African pulp fiction. At its height this Durban-based independent publisher was releasing 20 photo comics monthly, including the popular titles Tessa, Condor and Kid Colt.

Averaging sales of about 30 000 units per issue, the brisk trade in pulp fiction made Republican the “biggest printing organisation in the southern hemisphere,” according to Ron Roderick, a retired executive who started his career at the company as a print apprentice in 1968. “The photo stories were the foundation,” says Roderik, 65, now retired. “They gave Republican the opportunity to go into the magazine market. he Hymans got sufficient wealth to buy into established magazines like Garden & Home.”

Perhaps better known as the publisher of Scope magazine, Republican started out as a Kimberly-based publisher. When the workload got “too big” for the Diamond Fields Advertiser, a Kimberley based newspaper and press established in 1878, the Hymans decided to import a used gravure press from Germany. “It was used by the Germans to print propaganda and counterfeit during the war,” says Roderik, who spent ten years obscuring the nipples and pubic fuzz of the naked women showcased in Scope during the years of apartheid censorship.

Too large to transport upcountry, the Hymans summarily relocated their business to Durban. Roderik is a fount of knowledge on the production of the photo comics. Tessa, the original bikini-clad blond – there were two, the second less successful – was a woman named Erna van der Westhuisen. “She came from Dirkie Uys Primary School on The Bluff,” says Roderik, referring to the skollie neighbourhood south of Durban harbour where many of the actors came from. Aside from Tessa, Mark Condor, played by Martin Paulse, was one of Republican’s more popular titles.

According to Roderik, the male actors were “big, hard chaps who had a certain appeal”. Like the young female actresses, they hoped to use the photo comics as vehicle for a film career. Catering to lower- and middle-income white families, the photo comics functioned as portable, if static soap operas. The stories were uncomplicated. “All you need for a movie is a girl and a gun,” said filmmaker Jean Luc Godard. Republican applied the same philosophy to its photo comics. The sets were improvised and included a Catholic church in Athlone Park and factories in Prospecton, the cast sometimes venturing as far south as Warner Beach.

The quick uptake and national popularity of the photo comics prompted Republican to professionalise their production, an Italian photographer, Franco Gardini, contracted to handle the shoots. “He joined the company in 1972 and arrived from Italy with his Hasselblads and what-not,” says Roderik. “There was big fanfare. He lasted about 10 or 12 years.”

Television, which was introduced to South Africa in the mid-1970s and refined during the 1980s, was death knell of photo comics locally. They are now a byword for white nostalgia for a past that doesn’t exist anymore. It is partly the anachronistic quality of photo comics that prompted Hannes to start Jungle Jim.

Instead of the fatal fallback of nostalgia, he wanted something new, something now. Not that he puts it quite as bluntly. It is only hinted at when 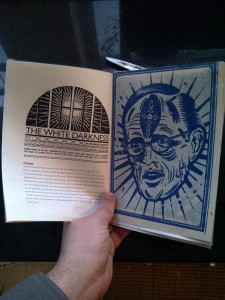 I quiz the pair about their reason for starting Jungle Jim. “That’s a good question,” laughs Jenna. “I actually dunno,” pitches in Hannes. “I think we were fascinated by the idea of doing pulp fiction in an African context. I think even though we have a vintage appreciation for photobooks and that kind of thing, it is not something that I can directly relate to, culturally. There is like a huge gap between that and me.

I was also really interested in other forms of African DIY publishing. In Nigeria, especially, they have a form of market literature called Onitsha.” Onitsha is a port and market town on the Niger River in southern Nigeria. A gateway to the north, in the 1950s and 1960s it was the site of a flourishing trade in pulp fiction. Produced by local presses, this ‘market literature’ – it mostly consisted of pamphlets and novellas – was consumed by taxi drivers, mechanics, white-collar clerks, primary school teachers, small-scale entrepreneurs and traders. Simplistic, moralistic and sentimental, this ‘semi-literate’ pulp fiction is nonetheless credited with establishing a literary appetite that is reflected in contemporary Nigeria’s vibrant media culture.

“Their media industry is much more active than ours,” Pieter Hugo remarked in 2005, shortly after returning from photographing his career-defining work of Hausa men with their hyenas. “There is an active press. They are very big on reading. People debate contemporary issues. It is not an apathetic society.” “There was a link between Onitsha’s bracing moralising stories – about men who treat their women badly, or how to spend your money wisely – and something genuinely African and pulp fiction,” says Hannes. “That was the original interest. We wanted to see what happens when you take extremely westernised ideas of aliens and sci-fi archetypes, and see how that gets applied in an African context.”

“What I loved about pulp was that they churned the stuff out,” adds Jenna. “It wasn’t always the best quality, but even if they were recycling things, they were always trying to come up with new ideas and stances. There were always these narrative drives.”

I put it to Jenna, whose duties on Jungle Jim are chiefly literary and editorial, that Nollywood, Nigeria’s brazen DIY film industry, is essentially the pulp fiction of now. “Do you really think the written word can compete against it?” “It was definitely a concern,” she says. “It is one of the reason’s Jungle Jim is so cheap.”

A R20 note will get you a copy of the magazine plus a silver R5 coin in change. “We don’t want this thing that costs R60 and then your money for the month to entertain yourself is gone. But that isn’t answering your question. I like to think not. I still think there is something special about reading something as opposed to having someone tell it to you or watching it on television.”

_Sean O’Toole has no hair and vertically long head. His nose is pointed downward and his mouth resembles that of a fish. To further quote Abdul Adan, “The guy was unlike anyone I have ever seen before.” Reprinted with permission from Enjin magazine.