Finweek’s gospel according to Marc 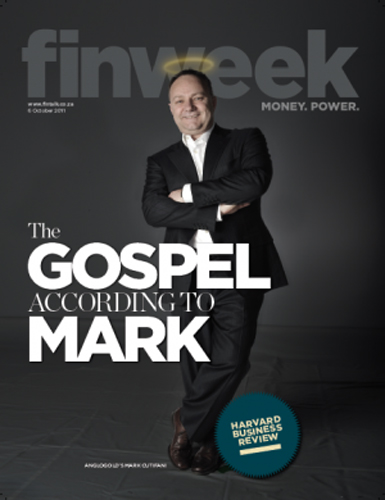 The recent repositioning of business magazine Finweek has upped the stakes in what many consider a rather stale magazine segment. Not that a lot isn’t happening in the business press, or that it isn’t already highly competitive – take the recent entry of Forbes Africa into the fray, or how the tablet market has opened up access to publications such as Bloomberg Businessweek to South African consumers.

It’s just that, for a while now, business media has seemed stale in a time when interest in the economy and business management news has skyrocketed, courtesy of the Great Recession, the sovereign debt crisis, and the ‘double dip’ bogeyman that keeps entrepreneurs awake at night.

Financial Mail and Business Day have stepped forth as the authoritative media voices of business people (in the formal economy) when it comes to the political economy. Their ballsy editorial approach hasn’t really been translated onto the design of these publications as consumer products, though. In look and feel they remain conservative, even as their audience grows accustomed to digital reading environments and global cutting-edge-designed media products.

This isn’t necessarily a doomed strategy in the case of FM, if only it can get its digital house in order; just look at that most unreadable of business must-reads, The Economist. But you are definitely not going to pick it up because its cover jumped off the shelf at you, or because you enjoy the reading experience.

Of course, all this just highlighted the precarious position of Finweek, a title stitched together by Media24 from the former English title Finance Week and Afrikaans title Finansies & Tegniek. You never know what monster strategy Media24 is going to throw against the wall, hoping the goo will somehow transmutate into a success.

Just mix together two magazines with two vastly different reader constituencies and task it to take on Financial Mail, then shovel the magazine into the newspaper division, and don’t forget to impose a superbrand in the form of Fin24.com on the title’s digital product offering. Having second thoughts? Then place it in there with Media24 Weeklies, of Huisgenoot and You fame. Sometimes magazines survive in spite of their owners.

The magazine itself has made some negative headlines in the last couple of months. Business Day (rather gleefully) reported that Finweek made a R8.9 million operating loss for the 2010/11 financial year.

So it’s rather amazing to see the title picking up its head, putting on its fighting gloves, and stepping forward to not only fight for its survival but to reinvent itself.

Firstly, acting editor Marc Ashton has made the product much more reader-friendly, with attractive covers and shorter, punchier content inside. He has upped the use of infographics inside the book, and is working on the quality of the photography, which will be used more frequently to give stories a greater visual element and pull.

Rather smartly, the short news items no longer sit across several pages in the front of the magazine but instead sit individually atop features. There is a new consistency in the fonts and colours used in the book, and the type doesn’t seem as dense as that of some of its main rivals.

It makes for an attractive package and one that will attract a younger readership. This suits Ashton, who says the average reader is around 32 (and 60% black), with the Afrikaans edition skewing the figure upwards. According to Ashton, Finweek’s Afrikaans readership has been in decline for the past five years, while its English readership has climbed.

Ashton is basically producing one magazine for two audiences; although they are moving closer together in certain demographics, simply translating a magazine into another language doesn’t leave much space for cultural nuance. While 50% of copy were produced in Afrikaans five years ago and translated for the English edition, some 95% of copy is now produced in English and translated for the Afrikaans edition.

Ashton is bringing in more Afrikaans writers to help remedy the decline in the Afrikaans readership. Vic de Klerk also got a column in the Afrikaans edition and, says Ashton, he is getting positive feedback from readers.

Ashton says his readership is all working; at their age they don’t hold property portfolios; and content is centred around how to best use your money to empower yourself. Hence the strap line – ‘Money. Power.’

Ashton has brought in content from the Harvard Business Review because, for his readers, “their assets are their jobs” and they want to know how to do well in it. Feedback already suggests readers find the Harvard content useful.

Finweek’s journalists are being trained to think about how the story will be laid out and illustrated while they are writing it. So, instead of 1200 worders, they need to be coming up with shorter pieces and ideas how to illustrate it and where, when possible, infographics can come into play. They have access to Bloomberg Businessweek on their tablets as a reminder of how it’s done on the global stage, says Ashton.

Better and more infographics, and more interactivity in them online, will be a design focus going forward, as will be improving the quality and frequency of photography in the magazine.

Ashton says that, as magazines will increasingly see circulation shift to tablet devices, it’s important to look at global standards – or risk being passed over. Finweek has sold roughly R150 000 worth of annual digital subscriptions and single copies – mainly on Zinio.com – over the past three-month period.

The Fintalk website is a joint venture with Charl Norman – the entrepreneur behind local social network Blueworld Communities. Ashton says Finweek is a magazine brand and will stand for the print, online and tablet editions, while Fintalk represents a community-content platform for the magazine to engage with readers on the web.

Ashton brought in Norman since Finweek lacked the in-house skills to rebuild its website (Finweek content had previously been sitting on the Fin24.com website). Also, readers need to realise they can’t access Finweek without a subscription – not even on the web. Fintalk sure – but it’s not the same as the magazine product and purposely so, says Ashton.

Advertising, which fell flat when Finweek’s demise was so widely rumoured – at one stage the ad load sank as low as 3% (the average per issue is 30% including corporate profiles) – is back up to normal. The book is attracting lifestyle advertisers such as Rolex.

Ashton acknowledges that rebuilding Finweek’s readership and profitability will be a lengthy process but is optimistic that the magazine is purposefully reengaging with its core audience – the basis for any attempt at regaining readers lost over the past five years.

Staff, meanwhile, are rallying around the new product, says Ashton, and while it isn’t perfect yet, it’s certainly the first brave step the magazine needed to jolt it out of the mud.