Last week, Jacob Zuma obtained a court date for his defamation lawsuit against Jonathan Shapiro, aka Zapiro, thus paving the way for history’s first civil court battle between a president and a cartoonist. Carlos Amato spoke to Zapiro, whose 16th annual collection, The Last Sushi, hits the streets this month. Interview by Carlos Amato, illustration by Zapiro. Thanks to Mahala. 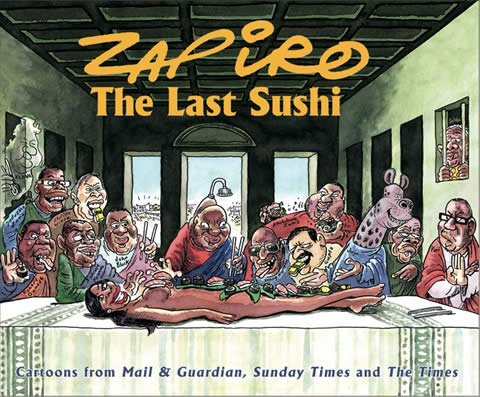 Amato: What’s the latest on JZ’s defamation lawsuit against you?

Zapiro: We’ve just been informed the court hearing will happen on August 28 next year, in the South Gauteng High Court. We’re not 100% sure if it’s just that they’re trying to apply pressure on us, if it’s simply intimidation. But I’m not intimidated and neither are my lawyers. We will make it extremely uncomfortable for the president. The court case will be all about whether he came to power in a kosher way – or not. That was the nub of the cartoon he’s suing us for. [The cartoon in question depicted Zuma preparing to rape Lady Justice, with the help of his political allies at the time, and was published in the Sunday Times in 2008.] 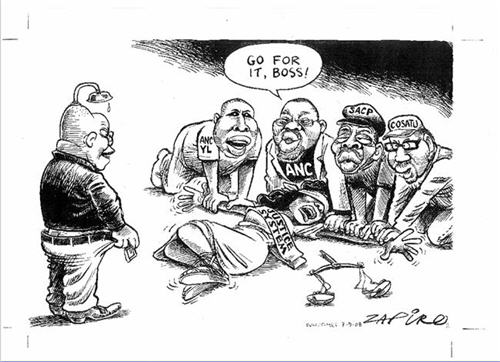 Roughly when did the ANC start losing its willingness to tolerate satire?

Of course there can never an exact answer, but you could peg it to the beginning of the Mbeki administration. Nelson Mandela had a fantastic sense of humour. He was not defensive and understands satire. Mbeki, as smart and intellectual a man as he is, is also prickly and paranoid. And that carried over from when he was deputy president: the seeds were there already there. But Madiba’s presence and immense authority as head of government was enough to minimise that aspect of Mbeki.

But when he became president, that’s pretty much where you can see a turn, and how much he held the ANC in his sway, and how frightened people were to buck his authority. And at that moment I think you could also see that there was a sense of humour failure. And I think that has carried through into the Zuma presidency, even though Zuma is more charismatic and less aloof on a personal level. But somehow politically, he is also prickly and defensive. And in fact he has done what Mbeki didn’t do, and that is to sue satirists and commentators.

Would you agree that South Africa’s ingrained memory of oppression and its culture of irreverence serves to protect us from would-be tyrants?

I’ve been asked many times in other countries whether we are on the Zimbabwe road, and I’ve always said no. But I have to say in the last couple of years, there have been some seriously disturbing incursions on freedom of expression and of the press. And rampant corruption and cover-ups. So I’m still saying no, we’re not becoming Zimbabwe. But we still have some extremely big problems. I think the public is not going to roll over and let these things happen – with the help of strong NGOs and media.

But there is one thing that has worried me: I think that the government and the ANC have in some instances been fairly successful in smearing the media, the judiciary and other institutions as counter-revolutionary in the broadest terms. And some members of the public have bought this nonsense. I’ve been on radio programs, where people have called in and I’ve been disturbed by the number of people who have been hoodwinked by this official spin. So we’re poised: we are that raucous, noisy society that accepts jokes about politicians. And to an extent as well, there’s been some trickery to turn some members of the public against the irreverence that satirists and commentators hold dear. We have to see where it goes. It’s not quite as clear cut as I thought it was.

Which of your cartoons are you proudest of?

There are a couple of tribute cartoons to Mandela, which I feel have crystallised what he has meant to the whole country. One that was published on his 80th birthday, showing a young Mandela in the class room, with “What will I be” on the blackboard. The teachers says: “This one can’t make up his mind, he put down: ‘Lawyer, activist, freedom fighter, prisoner of conscience, nation builder, 20th century icon.’ It’s the kind of cartoon that has an in-joke with the reader. This is how we think of him, and how could he have imagined himself being all these things? 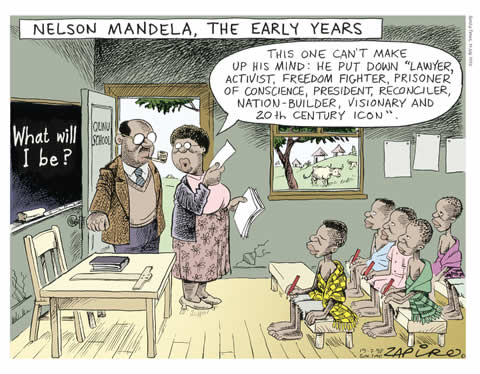 There are a lot of dimensions to it. I like cartoons like that, which present a funny moment with warmth in it, but also another dimension. There’s another cartoon where Thabo Mbeki is in a limo outside parliament, and a guy is asking for money at the window of his limo. Mbeki just doesn’t get it, and says: “Change? Change takes time, my friend.” And that was a sort of summary of the era, and perhaps the country’s history since 1994. I’m proud of those cartoons which have that kind of resonance. 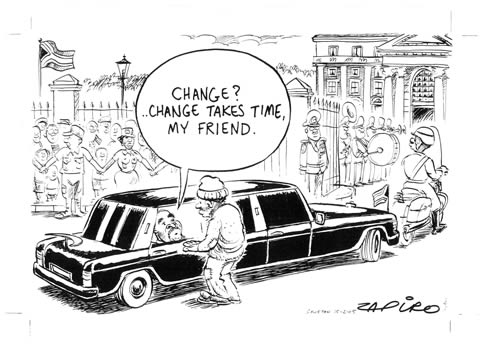 But there are others I like because they are totally scatological and irreverent. Like George W Bush getting a colonoscopy, with a probe up his butt and you see his brain, and he’s humming a little tune. Or PW Botha when he wouldn’t come to the truth commission, on the phone, while bonking his new girlfriend. And he says: “TRC subpoena? Impossible! Uh! Uh! I’m suffering ill health!” 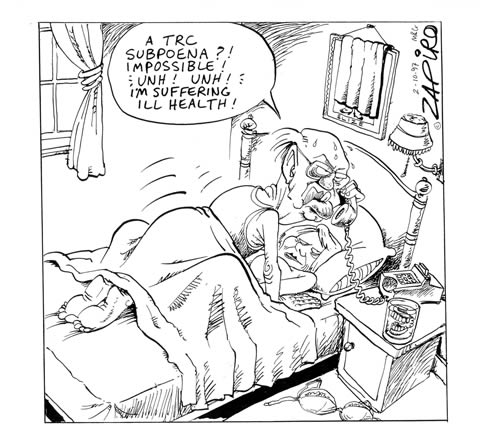 You’ve been a political cartoonist for close to 30 years. How long will you keep at it?

I flirt with the idea of other forms of cartooning. I love the editorial cartoon as a form. It gives me that immediacy that I love. It gives me a voice. It’s a combination of some forms of journalism and comics, and caricature. I feel privileged that I’ve had the chance to express myself in that little white space. So the idea of giving it up is quite scary, because I do love doing it. At the same I studied sequential art, and I would eventually like to do more in that genre.

What are the emotional rewards and costs of your job?

What’s so exciting about it is the contact with readers, the feeling that you’re touching parts of people’s minds, that they’ve been trying to access and found it difficult to make connections with. The bad stuff is the deadlines, which I have to admit I’ve never fully mastered. I struggle. I really do want to make sure that the cartoons are good and that they work before they go into the paper. So clocks and deadlines. And what goes with that is angst and second-guessing. I’ve never become completely complacent, I’ve never felt that I’ve made it and that I know exactly what I’m doing all the time. I once did a cartoon in which I’m lying on a psychiatrist’s couch, saying: “If I have a day without self-doubt, I worry.” Which is kind of true. I suppose in some ways I’m Woody Allen with a pen.

It’s not always about blandness – there are some faces that have quite a lot of depth and character, but they don’t have the kind of features you can get rough with. One example is Dikgang Moseneke, who I’ve recently had to draw a couple of times. Lots of personality in his face, find it hard to latch onto a feature and really push. Jeff Radebe I found a bit difficult. Tokyo Sexwale has gone from someone I enjoyed drawing to someone I struggle with, maybe it’s because he shaved all his hair and beard off, and got a bit older.

How worried are you about the Secrecy Bill?

We should definitely not relax. It’s because of the efforts of the media and civil society and to some extent some opposition parties, because of pressure from those groupings, that some aspects of the bill have been rolled back. Of course the huge exception being the absence of a clause which provides a public interest safeguard for media and whistleblowers who release important classified information. Various groupings will continue the fight against this, and I will join them and continue to draw cartoons about it.

If Julius Malema should exit the political stage, would you miss him?

You always miss the noisy populists as a cartoonist. He’s a very fascinating character. He’s not all bad, but I do think he is in some ways very dangerous. The dangerous stuff is that he is the best example of tenderpreneurship, and of giving some legitimacy to it. I think he’s lost a bit of the credibility that he may have had, I think he overplayed his hand. But there are many more like him: people who are populists in the Peron tradition. It’s the gangster on the block making his living in unsavoury ways, and giving out lots of presents.

That’s what Malema represents. He speaks his mind, sometimes outrageously. He’s seen as someone who has the guts to stand up to anybody, but in fact he is full of contradictions. He is making his money with the very people he’s attacking, and at the expense of the very people he purports to defend.

*All images © Zapiro. Repinted from Mahala.