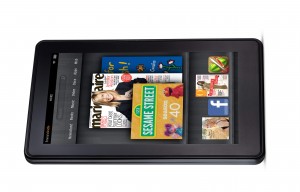 Amazon last week stunned the market with its announcement that the 7” Kindle Fire tablet will sell for $199.99 – well under half the price of the cheapest iPad. And it will release a $79 Kindle e-reader. ARTHUR GOLDSTUCK and SEAN BACHER reports.

Amazon CEO Jeff Bezos stunned the market by not only announcing that the new Amazon tablet would retail at $199.95 – well under half the price of the cheapest iPad – but also that a cheap Kindle e-reader would retail at $79.

Amazon’s Kindle Fire is the device that may just turn the tablet computer market into more than a one-horse race.

But Bezos couldn’t resist a Steve Jobs-like moment: “We have another device we’re releasing today,” he said, and unvelied a low-end Kindle e-reader priced at $79. Moments later, he topped that with a touch-screen version, the Kindle Touch, at $99. In style and substance, it was clear that Apple had been directly targeted.

Ahead of today’s announcement of the device, the rumours had swirled in a storm of speculation. How does the reality stack up?

Rumour: It will be called the Kindle Fire
Fact: Confirmed

Rumour: It will cost $250 or, in South African money, around R2000. That, in anyone’s money, is half the price of the iPad. The rumour mill lost its collective nerve at the last moment, forecasting a $300 price tag in the hours leading up to the announcement.
Fact: Amazon has whammied the market – and Apple – with a price-point of $199.99

According to PiperJaffray analyst Gene Munster, 60% of 410 consumers surveyed last week said they would buy a 7” Amazon tablet at $249 rather than a 10-inch iPad for $599 (the average price of an iPad). Only 21% opted for the iPad. It is clear that price is the big differentiator in the market, and the reason no other tablet manufacturer has been able to compete with the iPad – even where their devices were regarded as almost as good.

Rumour: It is built by Quanta Computer, the same people who built the BlackBerry PlayBook, and will use the same basic design.
Fact: Confirmed

While some American analysts equate the BlackBerry PlayBook’s poor performance in the market with poor design, the truth is that the business and aps model of the device destroyed its chances. The actual build is among the best in the tablet market, and no bad starting point for a device that can compete on price and apps.

Rumour: It will run a version of Google’s Android operating system, but extensively customised for Amazon.
Fact: Confirmed

Rumour: It will have a dual-core processor, meaning it is a heavyweight performer, on a par with the most powerful Android tablets.
Fact: Confirmed. The Kindle Fire uses a dual-core TI OMAP4 processor.

Rumour: It will have no camera.
Fact: Confirmed

Rumour: It will offer a subscription-based movie  and TV streaming service, based on Amazon prime, which goes at $79 a year.
Fact: Confirmed

Rumour: It will include pre-packaged partnerships with major magazine and newspaper publishers.
Fact: Confirmed

Rumour: It will link directly to the Amazon App Store.
Fact: Confirmed

Thanks to its well-evolved online retail and content offerings, Amazon was in a powerful position to compete with the Apple App Store. It’s own version has leveraged Amazon’s massive customer base to make it one of the most powerful outside of Apple, and that makes an Amazon tablet an instant contender in the apps space.

Add up all of the above, and the tablet market in 2012 is clearly going to be a tale of two tablets – and maybe more, if other manufacturers learn the basic price rule.

And there is more:
With WhispeSync for movies, you can watch a movie on the Kindle Fire.

Amazon subscribers will have access to 17 million songs, 100,000 movies and Amazon’s Cloud Player. They will also have access to millions of books and full colour magazines.

With Amazon’s Prime, Prime Instant video, subscribers will be able to stream 11 000 movies and TV shows. The company has already committed hundreds of millions of dollars to this program.

A new feature on the Kindle Fire is its X-ray that gives you the “bones” of the book. It pulls up all sorts of information on an event that’s in a book.

The Kindle Fire’s screen offers 16 million colours at 169 pixels per inch and is made from gorilla glass, a tough scratch resistant glass used on most smartphones and tablets.

Android games such as Angry Birds will run seamlessly on the device.

The built in web browser looks at aggregate behaviour, and will request pages before you realise you need them

* Arthur Goldstuck heads up the World Wide Worx hi-tech market research organisation and is editor-in-chief of Gadget. You can follow him on Twitter on @art2gee. Reprinted from Gadget.