The launch issue of NewsNow/NuusNou has hit the newsstands. The new weekly, published by Media24 Magazines, publishes on Fridays and retails at R20. 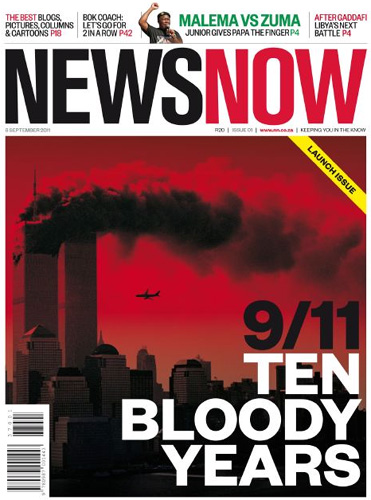 Any new weekly print product means serious money invested, even if, as in the case of NewsNow, content gets aggregated from various sources by a handful of editors, minimising investment in content.

The concept, its editors say, is to adapt the way people access and digest news online for print. That means short snippets containing the thrust of a story before you flip to the next item of interest.

The problem, for NewsNow at least, is that news stories accessed in this manner online is usually current, whereas in printed form and a week later, skimming over the basic facts seems pointless and a waste of time, especially if your target market is probably well-informed.

The publishers of NewsNow argue that the lack of time in the lives of modern consumers is exactly why they are publishing this magazine. But they assume that their target market has happily waited for this digest of news to arrive at the week’s end. Those in the know, with apologies to the magazines strap line (‘Keeping you in the know’), in all likelihood access several local and international news sites daily, watch SKY, BBC News, CNN or Al Jazeera (or just as likely flips between them) and sift through several print news products a week.

Yes, even those short on time find time for news, and they are the ones most likely to take an interest in a publication such as NewsNow.

Let’s do a short analysis of the launch issue’s cover story on the 10th anniversary of 9/11:

Hijacked jetliners smash into New York’s World Trade Center and the Pentagon, while another goes down in a field outside Pennsylvania. Osama bin Laden and Al-Qaeda become household names. Events on the day eventually result in the invasion of Afghanistan and later Iraq, while new legislation rolls back civil liberties in the United States (well, everywhere), while the relationship between Muslim communities and the US is compromised. The US doesn’t yet feel any safer 10 years on and the use of 9/11 as a basis for the attack on Iraq has been thoroughly discredited. The US is only now withdrawing troops from the countries it invaded. The end.

Would the story work in a general interest title such as Huisgenoot or You, two of NewsNow’s stable mates? Yes, it would, it’s a good overview of what happened – kids are sure to take clippings to school for class discussions. Does it offer any key insights or analysis – yes, even of the aggregated kind – to somebody who might typically pick up a news magazine? I think not.

The story reflects a number of missed opportunities. It offers no integration with digital media, and this is a print product that really is well-suited to be leveraged online, eg, by offering the research links online on every story published.

Instead of a rehash of events, what about aggregating some of the best insight and analysis on 9/11’s impact on our personal freedoms (RICA, FICA, rendition), business (hospitality and travel, a new class of security companies that seem to make up their own rules with impunity) or convenience (mothers drinking their own breast milk before being allowed to take on on-board airlines)?

There is 10 years’ worth of thinking out there on how the events of 9/11 have transformed the world – much of it online – so aggregate away. Just aim to shoot a little above average.

I’m also not sure that the bitty nature of the shorter pieces translates into print. Online news content, the reading model the publishers of NewsNow claim to be adapting into print, offers the opportunity to click through to a page that contains only the text you want to read, after having scanned short headlines and blurbs. In print, it’s a mash-up of headlines and copy that doesn’t really allow the reader to focus on any one item.

It’s a major beef I also have with iMaverick, the new daily tablet newspaper currently available as free beta edition active pdfs while the iPad app is awaiting iTunes approval, in that where newspaper meets magazine with a dollop of online, I’m simply not tuned into this kind of reading experience, and find no real joy in it.

Overall, NewsNow’s grid-like layout seems rigid and conservative, with limited use of photos or colour, and no infographics to tell stories visually (although it does offer two pages of infographics in the Pick of the Week section). Maybe it’s an indicator of a weakness in journalism; our inability to grasp that images and graphics extend and enhance the written word means often we fail our readers on this count. Again, I also point a finger at iMaverick.

Even the ‘Powerful pictures’ in NewsNow picks which aims to highlight some of the best news photography around has four images shovelled onto a single page, breaking their power.

The magazine’s strength lies in its ability to pick out the best global content and aggregate it, as its Pick of the Week segment shows, and this section makes the title for me, rather than the news content. Great columns, cartoons, letters from readers, magazine covers, pictures, blogs, and graphics take up only six of its 48 pages (including covers), when really I would have been happy for this to take up the entire magazine.

Imagine picking up a copy of NewsNow/NuusNou every Friday, and reading up on the best analysis and insight available in the international and local news media, while surfing to the actual, full text content via links on the websites of the stories and images that really caught your attention. A less conservative design could be used to effectively draw readers into stories while making the product feel premium (design does that – just ask Apple).

News24 was made to be read online, in the moment, with breaking news. It’s not a model that translates into print; at least, not for me. NewsNow can be made relevant to the modern media consumer with a little more strategic thinking and less old news content.

For now, I prefer my news now, and online.