The WiFI version of the Asus eee Pad Transformer sneaked into South African stores in July with little fanfare. But the high-end 3G unit arrives this month, and Asus expects it to shake up the market. ARTHUR GOLDSTUCK assesses its chances.

Four years ago, Asus was one of the earliest and most aggressive players in the Netbook market with its Eee PC. It practically invented the format. 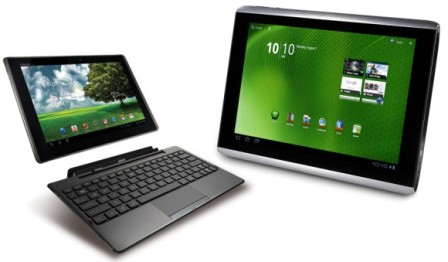 So, when Apple redefined portability with the iPad in 2010, Asus was expected to be one of the first challengers. And, indeed, it hit the market mere weeks after the iPad, confusingly announcing an e-reader it called a Tablet, and a tablet it called a Pad. The fact that Apple didn’t immediately take them to court may well have been an indication that these devices posed little challenge to the iPad at the time. Fast-forward a year, and Asus has a device on the market that goes beyond the iPad.

It’s called the eee Pad Transformer, a 10.1” tablet running Android 3.0 or Honeycomb, and offers an optional docking keyboard that also boosts battery life from 9 hours to 16 hours. Well-priced at $399, its first production runs – estimated at about 100,000 – reportedly sold out immediately in some markets, and in June it shipped a further 300,000 units.

That it remained in short supply is an indication that, with more aggressive and courageous marketing, it could join the Samsung Galaxy Tab 10.1 as the main challenger to the iPad.

The first version of the eee Pad (pronounced “e-pad”) was WiFi only, and that’s the version that arrived quietly in South Africa in early July. September sees the 3G version arrive in South Africa, around mid-month.

“We have some significant retail developments to be announced in September which will boost our unit sales,” says Tyrone Grüner, Asus product manager at Platinum Micro.

He points out that the Asus eee Pad Transformer has quickly become the number one-selling “open” tablet in a number of international markets. Its success, he says, is a design which delivers against the demands of a market spoilt for choice.

“While a number of Android tablets are emerging, the eee Pad is winning market share owing to its battery life, performance and design. It is on these criteria that it is unbeatable,” he says.

Asus also makes much of the fact that, in July, it was reported that Asus has assumed the mantle of the world’s biggest non-iPad tablet maker.

“This is significant,” says Grüner, “as there is no shortage of competition in this segment of the market. With over 400 000 units shipped, and with the Asus device listed as the number one selling tablet on Amazon.com in April this year, consumer demand is strong.”

It’s not the tablet alone that is selling, he adds.

“What is particularly noteworthy is that the bundle including the keyboard is the top-selling configuration. This tells us that tablet users want more than touchscreen input from their device. That’s especially true as the tablet is seen not as a ‘play’ device, but one which is at home in the office or after-hours.”

In the light of criticism that Sony’s newly unveiled Tablet P is “plasticky”, it is also significant that the eee Pad uses high-quality materials that include brushed aluminum. It takes on the iPad with dual front and rear cameras, the Galaxy Tab with an SD and MicroSD card slot, and delivers on the now standard tablet expectations of embedded GPS, Bluetooth and  WiFi connectivity.

Since it uses the Google Android operating system, says Grüner, “it represents an ecosystem which is delivering hundreds of thousands of apps to the user. Easy interoperability with compatible mobile phones is assured, which, when tethered, create a WiFi hotspot. With support for Flash and supplied with the Polaris Office suite, the versatility of the device is clear.”

At $399 in the USA, the eee Pad is the most affordable Android Honeycomb tablet on the market. However, this price advantage is not carried over to South Africa. The official prices announced in June start at R4499 for the 16GB version, which at first site appears to compare directly with the iPad 2’s R4 399 for its own 16GB version.

But comparing Apples with Asuses, this is plain poor strategy. The comparable US prices being $399 and $499 for the Pad and iPad respectively, the South African cost for the eee Pad should be around R3600. That would make it far and away the cheapest major name brand large format tablet in South Africa (with only Huawei’s 7” Slim at the same price point), and give it an unbeatable advantage in this market.

Perhaps we will see more competitive pricing when the 3G version arrives in bulk. Meanwhile, the reseller channel – Hirsch’s, Look & Listen, Computer Mania and Chaos are lined up to stock the device – should expect customers to demand that it be better than the iPad if they are expected to pay the same price.

Grüner is confident the customer will make the right choice: “Consumer demand is there; it’s hard to describe the appeal of this product without seeing it for yourself, so we believe that as word of mouth gains momentum, there will be plenty of people who are looking for the advantages of great hardware design combined with Android’s appeal who will choose the Asus tablet above any other. We’ve seen it internationally; we’ll see it in South Africa, too.”