One of the more interesting aspects of reality TV is the regular emotional schlock fest that occurs three-quarters of the way through whatever series it is you happen to be watching. Contestants are broken down by days on end without access to their electric can openers, fast food and loved ones. John Doe reports. They also intensely re-evaluate:

1. The world
2. Their place in the world
3. Their own approach to life, the universe and everything

Regardless of the show, reality TV cast members invariably expound on the dramatic effect the experience has had on them – they never realised how much lack of food and a King Coil mattress can toy with one’s mental stability. 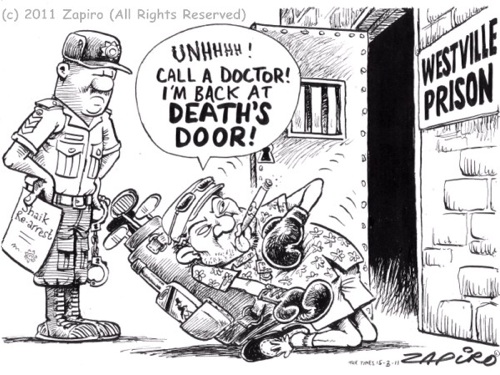 The reality TV formula is disarmingly simple: we simply cannot get enough of watching people build themselves up around their perceived values, and we lust even more for the fall – watching them degenerate, one by one, into a bunch of lying, cheating game show contestants.

Consumer demand has necessitated a fundamental shift away from fictional TV stories. How many cops and robbers have we all seen? How many times can we watch a coroner thoughtfully dissect a corpse, determine through a series of fortuitous events the cause of death, bed a budding young detective and valiantly shoot the baddies?

We want to believe. We want to be moved in our couches. And reality TV provides just that. Sure, we know the power is in the hands of the editor, but nevertheless it is fun watching real people jabber and prance their way through an endless series of plastic hoops and social confrontations.

And while there is definite appeal in watching someone gag while eating the brain of a goat, what ties the whole reality TV concept together is the clear distress the contestants go through. It is the consumer’s demand for the heart wrenching, our insatiable need to watch people discover their real place on the triangle of mankind, capitalism and the media, that has powered the reality TV boom.

And it is the very same consumer demand that drives a lot of the misery, hunger and pain on the rest of the planet. Were the western world to try and produce those brand name sneakers according to its own high standards of labour practice, well, it would simply be too expensive. Consumers would not accept such high prices.

Yes, consumer demand is a hell of a thing. The appetite of the western consumer has kept the global labourer firmly under the hard capitalist heel since before Marx was even thinking about the revolution of the working class.

Your average consumer also believes on some level that the homeless are lazy. We all know they smell. We also believe, despite our inevitably liberal outlook, that street people could probably look harder for a job. They could also stop drinking and smoking that grass, they could wash and shave, they could make a bloody effort.

This is the way western society views the indigent – the millions of people who live a long way out of view, so far below the poverty line no one will ever find them. While we actively watch and participate in the mental disintegration and re-tuning of game show contestants competing for money, we in no way give the same attention to the starving.

Reality TV has the potential to teach us all a very important lesson: No matter who you are, once you’ve been without food for more than two days (or locked in a house, etc. etc.) you start to lose control of your mind – and your body will follow shortly thereafter. In the case of lack of food, your speech will slow. You will struggle to place one foot in front of the other. Washing will not be that important, falling some way behind the priority of finding something to eat.

Unfortunately, the potentially important realisations we gain from reality TV last only as long as it takes unwrap the next Snickers bar. Historical patterns of consumer demand indicate that we are destined to repeat the same process again and again for decades to come, realising and then forgetting in quick succession that poor people and hungry people are, as we sit in our couches, living through hell.

You could worry about it, the plight of mankind. You may even lose a few minutes sleep. But really there is nothing to be done. We are consumers after all, and it has always been the consumer’s prerogative to gorge on fake realisations and other people’s tears. We demand it, and so it shall be.

Breaking away from being a consumer, from being no more or less than another target on a marketing consultant’s demographic breakdown… Well, it requires life-changing effort. And besides, if we moved off the couch to do something about it all, how could we possibly stay tuned for scenes from the next episode?

— John Doe has enjoyed a long career as an executive assistant, working with a variety of major global brands in a clerical capacity. Long famed in the corporate sector for his legendary dictation skills, Doe has recently also gained acclaim for his incisive media journalism. Although queries have been raised as to the veracity of some of his information, Doe is adamant that he simply reports on media issues that he comes into contact with – his sources remain a closely guarded secret. Doe dismisses as ‘unsubstantiated’ and ‘possibly defamatory’ allegations that he is in fact one Andrew Miller of Unity Design.