A series of Facebook pages, started several years ago, has been so successful that its creator has teamed up with two friends to start a group-buying business called CityMob off the back of it. Daniel Solomon started the I Like Cape Town fan page on Facebook on a whim and has seen it grow to a group with over 30 000 members. 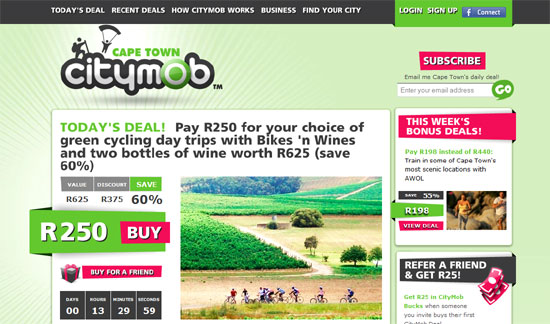 Solomon, together with Luke Jedeikin and Claude Hanan, believe they can marry the success of these Facebook fan pages with group buying. Made famous by US-based Groupon, group buying offers consumers a daily discounted deal via email. The deal is usually available for a limited time (typically one day) and requires a minimum number of consumers to buy in on the deal before it expires.

The trio started looking at how to monetise their Facebook success when group buying was starting to make waves outside the US. There were few local offerings at the time – the primary two being Wicount and Twangoo (now Groupon MyCityDeal South Africa).

They come from three diverse but ultimately complimentary fields. Jedeikin was a brand strategist at Ogilvy, Hanan had a financial background at Allan Gray and Solomon worked in IT infrastructure. Today, Jedeikin manages day-to-day operations at the company.

Having scoped out Wicount and Twangoo, they decided there was space for another player. As, says Jedeikin laughing, did everyone else apparently. He counts as many as 25 group buying players in SA at the moment. In any case, Jedeikin and his partners felt they had a ready-made community on Facebook, and after a six-month due diligence process, stuck their own money into getting the project off the ground.

Jedeikin says the Facebook communities involved have been generally supportive of CityMob and the direction it has taken the fan pages involved. According to Jedeikin, the pages were being spammed with commercial messages and that growth was stalling and interaction declining.

CityMob, he says, brings a structured and much more sensitive commercial element to these community pages. Growth has started up again, as has page activity, which Jedeikin says points to them doing something right. Jedeikin says that, while CityMob has taken ‘custodianship’ of the pages in question, it supports active community forums and user interactivity.

The SA launch of Groupon came as a bit of a shock, Jedeikin admits, and he sees consolidation in the local group-buying industry going forward. CityMob, with its ready-made user base, believes it will succeed as long as it focuses on the best local deals for consumers while capturing the philosophy of the merchant they are doing business with. And in any case, Groupons’ local entry has sped up the maturing of the market from both a consumer and merchant perspective – which is good for all the players in the field.

For city businesses, group-buying sites offers ‘risk free marketing’ with no upfront costs and performance-based remuneration. Commission is dependent on the price point but Jedeikin says CityMob’s commission is lower than that of its main rivals.

The business is evolving as things change on the ground, says Jedeikin, and the original vision and projections keep on changing as the market develops. CityMob currently employs a team of eight and works closely with its two partner agencies, Hello Computer and World Wide Creative. CityMob is also not a business being “built to sell” – its objective is to create legitimate relationships with its community, and Jedeikin is more than happy with organic growth levels.

Jedeikin admits that, in SA, many group-buying sites are falling short. Offers up for a week or more takes the urgency out of the purchase decision and allows consumers to shop around (‘that is a good price, but maybe Groupon offers something better tomorrow’).

They also don’t take advantage of the group element (where consumers email friends saying there is a great deal out there but you also need to buy in if it’s going to be realised) by setting low tipping points. At CityMob, the aim is to do group buying in its classical sense only.

CityMob hopes to reach Johannesburg and Durban before the end of the year. This expansion will allow it to hedge it bets across several markets, which will mitigate a bad day here or there in another.