Eight paragraps down you get this little disclaimer “Malema is not necessarily the creator or even involved with the page.” You don’t say Daniëlla. 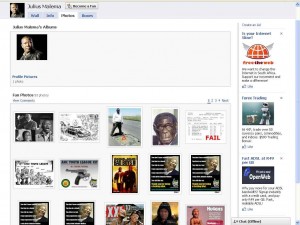 Even a quick glance at the site in questions clearly shows this is not a Facebook page run by Julius Malema, the ANCYL or even a Malema supporter. The picture page is filled with images ridiculing Malema and the wall posts shows all kinds of racist invective from all sides of the numerous devides.

One ‘Malema fan’ writes “You run around like monkey’s singing death songs about killing whites and so forth. I’m a young white with a young boy, i will make sure to teach him what kind of race you truly are. I will be as racist and do anything in my power to fight u fuckers back. You can take the K@ffir out of the bush, but u cant take the bush out of the K@ffir.”

Another writes “lets face the facts. Julius malema is a idiot that knows nothing about politics. he just there to spend the tax payers money like the coverment. let me be very clear.. he is a big mouth that like 2 talk shit with back up men standing behind him. he don.t have the balls to come tell a white guy in his face what he think…”

Does anybody at Media24 still check copy? Did and News24 editors take a look at the purported ‘Malema fan site?’ The answer seems to be no.

The good news is you can still become a ‘Media24 fan‘ on Facebook.