The Huffington Post finally publicly distanced itself from a blog post by Jeffrey Hoffman on South Africa’s 2010 World Cup. The story has been 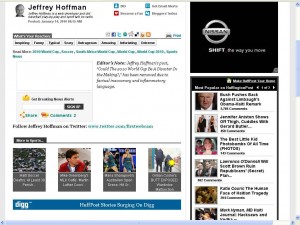 removed from its website and the following note appears:

Editor’s Note: Jeffrey Hoffman’s post, “Could The 2010 World Cup Be A Disaster In the Making?,” has been removed due to factual inaccuracy and inflammatory language.