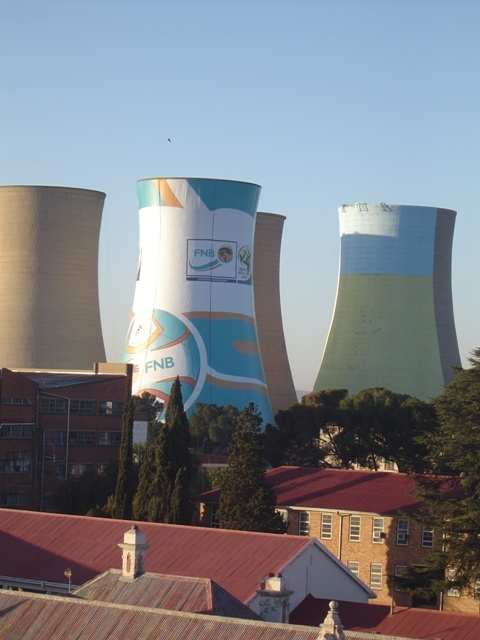 Draftfcb Johannesburg has branded four more cooling towers for First National Bank as the bank gears up to exploit its sponsor status of the 2010 FIFA World Cup.

The cluster of four towers is (sadly?) one of Bloemfontein’s more prominent landmarks. Two have been wrapped in FNB’s 2010 FIFA World Cup livery, while the other two feature vibrant artwork depicting the city’s heritage.

In 2003, the two cooling towers of the landmark Orlando Electricity Plant in Soweto were transformed through similar artistic works and have now become instantly recognisable icons of the City of Johannesburg for locals and international visitors alike.

The Bloemfontein task involves 12 800m² of canvas (that’s just over 3 acres), which has been used to wrap the towers, over 12 000 litres of paint, a team of 8 including 7 artists, and 720 man-hours per artist.  Each tower is 60 metres high and has a circumference of 120 metres at its base and 70 metres at the top. The Draftfcb Johannesburg team included executive creative director, Marthinus Duckitt, Janine Kleinschmidt, Dawn Franke, Jenine Skinner and Alistair Mathie.

Mark hopes Cape Town’s cooling towers are next in line. They could do with a coat of paint…