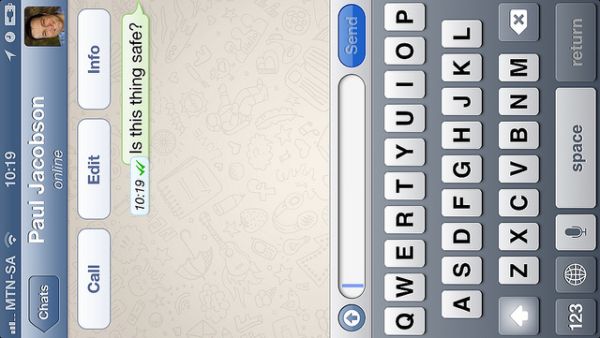 by Paul Jacobson (@pauljacobson) The popular mobile and multi-platform messaging service, WhatsApp, was investigated recently by the Office of the Privacy Commissioner of Canada and the Dutch Data Protection Authority for apparent violations of Canadian and Dutch privacy laws. The investigation found a number of violations and the Canadian Privacy Commissioner released an update on 28 January 2013 reporting back on the violations which have since been addressed and those which remain unresolved:

The investigation revealed that WhatsApp was violating certain internationally accepted privacy principles, mainly in relation to the retention, safeguard, and disclosure of personal data. For example:

Essentially, these concerns are that WhatsApp collects details of your contacts automatically (unless your phone is running iOS 6, in which case you would be prompted to allow WhatsApp to access your contacts’ details) and uploads that data to WhatsApp’s servers to be compared to its database of users so it can identify which of your contacts are using WhatsApp and allow you to message them using the app. So far, so good, but WhatsApp doesn’t subsequently discard the data pertaining to non-users after it has compared them to its database.

The WhatsApp Privacy Notice deals with this in a couple sections:

WhatsApp may obtain the following types of information from or concerning you or your mobile phone device, which may include information that can be used to identify you as specified below (“Personally Identifying Information”):

User Provided Information: You provide certain Personally Identifiable Information, such as your mobile phone number, push notification name (if applicable), billing information (if applicable) and mobile device information to WhatsApp when choosing to participate in various uses of the WhatsApp Service, such as registering as a user, updating your status or requesting status for your contacts. In order to provide the WhatsApp Service, WhatsApp will periodically access your address book or contact list on your mobile phone to locate the mobile phone numbers of other WhatsApp users (“in-network” numbers), or otherwise categorize other mobile phone numbers as “out-network” numbers, which are stored as one-way irreversibly hashed values.

The Information WhatsApp Does Not Collect

The big question is whether WhatsApp should retain non-user phone numbers after it has conducted its comparisons between the captured data through the app and its database?

At present the main issue in South Africa is whether transmitting your contacts’ personal information to WhatsApp violates their privacy. Our current privacy law is informed by the right to privacy in the Bill of Rights, prevailing case law developed by our courts and legislation like the Electronic Communications and Transactions Act and Consumer Protection Act. The Protection of Personal Information Bill has not yet been passed although I’ll deal with that below.

The answer to this lies in the implicit (or explicit, if you have it) consent you have from your contacts to take the personal information they give you and pass that on to WhatsApp and then contact them through WhatsApp if they are users? This is a tough question to answer in the absence of an explicit preference from your contacts one way or another. Presumably they gave you their contact details or made them available with the expectation that you contact them. Whether a contact would object to being contacted using WhatsApp is a secondary issue. Conceivably some users may object to their personal information being passed to WhatsApp due to concerns about its privacy practices or out of a desire to remain out of that system and where a contact expresses that preferences, you should certainly act appropriately. Absent that express preference, may users assume they have their contacts’ implicit consent? Perhaps.

any voluntary, specific and informed expression of will in terms of which permission is given for the processing of personal information

When it comes to individual users, the Protection of Personal Information Act probably won’t require individuals to comply with its restrictions when it comes to compiling their contacts lists where doing so is “in the course of a purely personal or household activity”. WhatsApp wouldn’t be able to take advantage of this exclusion so it would be required to obtain its users’ consent to process their personal information.

Will the Protection of Personal Information Act apply?

You may have noticed that WhatsApp indicates that it stores non-users’ (or “out-network”) phone numbers as “one-way irreversibly hashed values” which, when coupled with improved encryption options make it practically impossible to resolve those hash values back to phone numbers (classified as “personal information” in most jurisdictions).

The Protection of Personal Information Act has a further exception to its application in that it does not apply to personal information “that has been de-identified to the extent that it cannot be re-identified again”. It would be interesting to test whether this exclusion would apply here and would probably be dependent on whether the hashed values could, somehow, be associated with individuals despite the encryption. WhatsApp only collects phone numbers and not names and other details (the association between a number and a name occurs on your device, not on the server) so this exclusion could well apply and get WhatsApp off the hook when it comes to potential Protection of Personal Information Act compliance. It would also likely address residual privacy concerns because the phone numbers will appear to have been practically and irreversibly anonymised.

Even if the Protection of Personal Information Act applies

If this exclusion does not assist WhatsApp, the Protection of Personal Information Bill contains a number of processing limitations along the lines of the limitations the Canadians and Dutch found were exceeded.

One processing limitation is “Minimality” which states that –

The Protection of Personal Information Bill’s purpose specification limitations include the following which are more appropriate to what WhatsApp is doing:

Section 18 deals with the necessity for informed consent from data subjects and includes the following exclusion which is similar to the exclusion dealt with above:

Another processing specification limitation in the Protection of Personal Information Bill which relates to the Canadian and Dutch requirements is the following:

Retention and restriction of records

Section 14(1) has a number of exclusions which probably won’t apply here but section 14(4) may assist WhatsApp:

A responsible party must destroy or delete a record of personal information or de-identify it as soon as reasonably practicable after the responsible party is no longer authorised to retain the record in terms of subsection (1) or (2).

Section 14(2) deals with personal information processed for “historical, statistical or research purposes” but may not apply here.

On the other hand, if “one-way irreversibly hashed values” does, in fact, mean they can’t be translated back into phone numbers and will remain as seemingly random data strings, then they will likely not be regarded as “personal information” in the first place as personal information is defined, at least by the Protection of Personal Information Bill, as including “information relating to an identifiable, living, natural person”. If that is the case then the debate about whether the Protection of Personal Information Act becomes largely academic from WhatsApp’s perspective as non-users’ phone numbers cease to be personal information when they are converted into “one-way irreversibly hashed values”.

Of course, when it comes to WhatsApp users, they are bound by the WhatsApp Privacy Policy and part of that includes their consent to their personal information being processed by WhatsApp in the manner described in the Privacy Policy.

Where does that leave WhatsApp?

So where does this leave WhatsApp? When it comes to South African law, there may be far less of an issue about WhatsApp’s retention of non-users’ personal information in South Africa than the Canadians and Dutch seem to have with the service although if their definitions of personal information are similar, it should, perhaps, be less of an issue for them too if these “one-way irreversibly hashed values” can’t be translated back into phone numbers and will remain as seemingly random data strings.

Is it safe to keep using WhatsApp? In light of the increased security added after the initial Canadian and Dutch investigations, it does seem to be safe to use WhatsApp. At least from this perspective.