by MarkLives (@marklives) Is adland embracing an African narrative? Are South African advertising agencies and brands embracing an authentically African narrative and aesthetic or do they continue to imitate American and European work? What can agencies, and brands, do to shift the paradigm towards embracing a unique creative identity that speaks to our African roots? Next in our panel to tackle this question is Duma Collective’s Sibu Mabena. 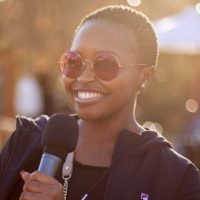 Sibu Mabena (@sibumabena), a 27-year-old graduate and owner of Duma Collective, founded her agency while doing her BA in political science and international relations at the University Of Pretoria. She has worked on Cassper Nyovest’s Fill Up The Dome, Fill Up Orlando Stadium, Fill Up FNB Stadium, Global Citizen, SAMAs, MTV Africa Music Awards and many more. Her agency has talent-managed Lootlove, Reason, Dj PH, Natasha Tahane and Motshidisi Mohono, as well as run successful social media campaigns for Amstel, Engen, BET, MTV in Nigeria and Kenya, Heineken SA and more.

I say this often about African hip hop artists… Try to be like them and you’ll always fall short because they’ll always have more experience than you at being “Them”. I fondly refer to Americans and Europeans as “Them”, not because I have any ill feelings towards “Them” but because I have a great sense of appreciation for what the people of the west and north have managed to achieve when it comes to influencing the rest of the world into appropriating their culture and subconsciously localising it.

McDonald’s, Coca-Cola, Ford, hip hop as a culture and the likes have done an incredible job of maintaining their heritage, regardless of their globalisation. Do we blame the local hosts of these great corporate giant products for allowing these culturally stubborn brands to inhabit our scarce land (and market), and attribute that to lazy marketing, or do we subserviently accept colonisation as the uncurable cause? My answer is two-fold: a bit of yes and no.

The insurgence of the ‘rebellious creative’ is rife. Young, proudly African, articulate and demanding creatives are occupying more and more seats at the table and challenging briefs from ‘global’. Gone are the days where young people were seen and not heard. The children, nieces and nephews of the mamas who were seen smiling for washing powder or a cooked meal in TVCs that replicated 1960s’ American ads, produced by the likes of McCann and Y&R in New York, have gone to advertising schools and now have jobs at the operating companies of those very same agencies in South Africa and they have started to influence the creative…

Where we would previously see Colonel Sanders as a representation of our favourite international fried chicken brand and the localised version in the form of Joe Mafela as the counterpart’s mascot, we now have Khuli Chana rapping along to his own music while walking down a township street half the population in SA can recognize and enjoying a piece of fried chicken. Relatable content!

The infamous Woolies flashmob digital ad, featuring the Soweto Gospel Choir singing Asimbonanga, is a heartwarming example of proudly South African content worth exporting… just like the stars of the ad who now sell out shows in theatres on many continents. Beyonce’s alleged (in her Spirit video) copy-and-paste of Petite Noir’s La Maison Noir visual album’s creative, as well as choreographic influence from Pantsula dance, which originates in SA, is a clear example of the rise of African creative influence on people who don’t live here. Our creative exports, such as Trevor Noah, Nelson Makamo, Thuso Mbedu, Sharlto Copley, Ladysmith Black Mambazo, Esther Mahlangu, Soweto Gospel Choir, Nomzamo Mbatha and all the works they’ve produced are a clear example of the market share we, as Africans, command in the global creative market.

But is adland doing enough to produce more and more of this relatable, ‘celebratable’ content? Not yet… How do we ensure that the ideas of young, proudly African and very capable creatives see the light of day? WE MAKE THEM SEE THE LIGHT OF DAY.

I say this with all due respect to the experienced and wise creatives who’ve played a big role in building the SA marketing landscape as we know it: move out of the way and allow new ideas to flourish. This isn’t rocket science; it’s human science. It takes humans to come up with ideas and then execute them… so allow the humans with good ideas, that stem from a context which the masses can relate to because the masses are African, to have a seat at the table.

We’ll continue to struggle to produce proudly African content if we continue to stubbornly ignore the opportunity that exists before us. The world is hungry for proudly African content that is authentic. If Americans can be bold enough to proudly benefit financially off producing stories like the Lion King and Coming To America, two stories themed around an African narrative but told by Americans, what is stopping us from doing the same… and better?!

Old guard, allow the new kids on the block to flourish. New kids on the block, spread your wings and prepare to fly! Adland needs your African context to create authentically African stories that will make brands stand out in the local and global market.