by Mark Eardley (@mdeardley) It’s dismaying. Commentary from Thomas Barta in Marketing Week highlights the career-ending consequences for marketers who refuse to see that increasing sales, margins and loyalty are the only things that should concern them.

To prove the apocalypse is now, Barta lists some corporates which have junked the CMO role:

Tested by the trinity. Proven to be wanting

CEOs are saying, as they always have, “I want profitable, sustainable sales.” Geddit? Look at Barta’s list and it’s clear that even very senior marketers ain’t getting it. That’s mainly happening because of an obsession with tactics, rather than a governing strategy that’s focused solely on the trinity. Just take the popularised thinking about ‘thought leadership’ (TL) as an example.

Thought leadership. It’s a tactic. Oooh! We better get some of that.

Boil it down and there is nothing new in B2B marketing. Its two rules were set in stone before even I was born. First, prove to customers that you understand their requirements. Second, prove that you will fulfil them better than your competitors. Bit more complex than the principles of the wheel, but not much.

Provide your markets with that convincing evidence and your offering will sell. Sell? Isn’t that a taboo word in marketing departments? It was clearly unmentionable in the now CMO-free B2B firms featured in the list. Maybe they should have recognised how TL makes selling acceptable or at least a bit less mucky.

If TL’s about non-selling, why’s it being given the hard sell?

I had that question answered for me by a TL study from LinkedIn in association with Edelman (probably the world’s biggest-billing PR firm). The 2019 Edelman-LinkedIn B2B Thought Leadership Impact Study is fabulously well-presented and offers some sound advice on ways to possibly get your sales-driven TL jacked.

As an alternative to reading Edelman’s classily pitched proposition, I’ll distil its wisdom down to this: TL sells. Come again? OK, TL sells. Yep, TL is all about selling. Like this: 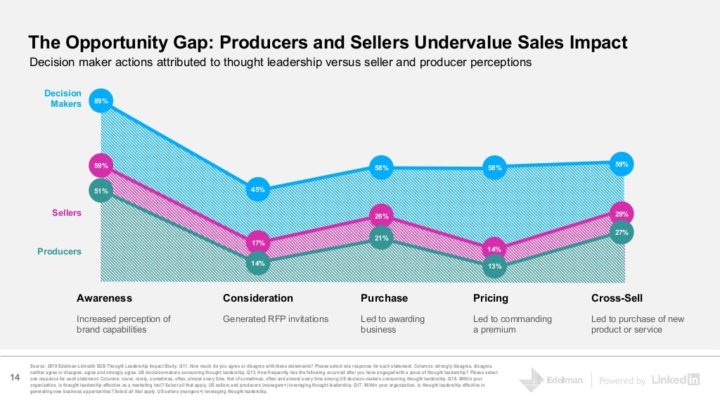 It strikes me that TL is no more than sound marketing wearing a newish hat. The basics of B2B dictate that you must get relevant, credible and convincing content to the right people at the right time in the buying decision cycle. To do that, you need to know who’s influencing the decision, what motivates their support for it, and how to reach them.

This apparently widespread ignorance was highlighted by Samuel Scott in his must-read Drum article, “Why CMOs are only lasting as long as Spinal Tap drummers”: “Everyone talks only about the fourth P — promotion, which is increasing awareness, interest, brand loyalty and sales after (my italics) doing everything else. It is the most interesting and exciting P, but it is also less important than the others.”

He goes on to say that, if there are no proven insights into other three Ps, “then the tactical promotion will be doomed from the start”. Doomed from the start. Doomed to fail when measured against that trinity of sales, margins and loyalty.

Time to get real: marketers are deal-makers. Always have been

A senior marketer’s job is to make deals happen. You must convince your markets that your firm is the smart choice, that your price is the right price. You must lead decision-influencers through the buying cycle in a manner that’s reassuring and builds their confidence. You must win their trust. You have to be the trigger that moves them from “I’m interested” to “Where do I sign?”

Anything you do that doesn’t do all that is just a pointless waste of time, effort and budget. And your CEO knows it. 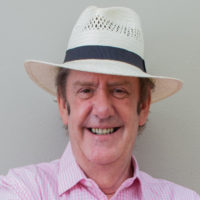 Mark Eardley (@mdeardley) advises B2B companies on how to govern their marketing to attract and retain profitable customers; several of his clients have grown to become market leaders. Apart from his new column for TGIFood, he and Charlie Stewart have written Business-to-Business Marketing: A Step-by-Step Guide (Penguin Random House), which offers practical, actionable advice on how to make marketing make money. His monthly “Back2Basics” column on MarkLives covers how B2B companies and their agencies should manage their marketing.