Frank: Why your daughter should be the next performance consultant

by Mimi Nicklin (@MimiNicklin) So, here it is: working motherhood in the ad industry is tough. Really tough. But not in the way the media makes out it to be. At least, not for me.

It’s not tough because of the time juggle, or the split attention, or any of that other stereotypical stuff out there; it’s tough because, when you have a baby, something changes in you forever. It’s emotional but also deeper than that — it’s how you see the world and how you feel about your industry.

It’s imperceptible at first but then you realise, time after time, that there are things you accepted before that you just don’t connect with anymore. Scrap that. There are things you accepted before are just no longer acceptable and you have a daily burning need to change the focus entirely to the work and the reason you are at work, instead of the ridiculous baggage our industry creates around it.

There, I said it.

Share some examples, you say? Approvals from creative directors that make the work late, because the hierarchy says so; impressive account managers who aren’t ‘allowed’ to write copy because their contracted title isn’t “copywriter”; and meetings where people are supposed to speak in order of their position. It’s utter rubbish. If you hired them because they are talented then, dear gosh, just let them do their thing.

The mum in me says it’s an unnecessary waste of time. When there’s the wonder of a two-year-old learning to ‘scoot’ alone for the first time on a Saturday, or the miracle of a first step to be watched, who gives a toss about who spoke first, or who claimed the winning line? Surely we did it together? Surely, in the grand scheme of work and life, it’s the end result — and not the ego — that really counts? After all, the sum total is a monumental effort from all of us.

Motherhood teaches you about being a team, about focusing on the fact that only together can you progress as a unit. Because children are innately the most-curious, -creative and -unguarded little things we have the honour of learning from and, if they could critically assess our working environments we would, for sure, be better off.

So yes, motherhood is tough, but mainly because you can no longer fathom the level of wasted time and energy that we all lose daily. 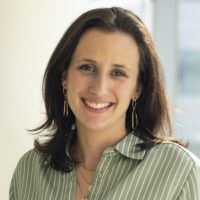 Based in Dubai, Mimi Nicklin (@miminicklin) is managing director of RAPP MEA, an Omnicom company. An experienced leader — she’s led global and regional brands from Europe, Asia, the Middle East and Africa on both agency- and client side — she believes in the systemisation of empathetic leadership and influence. Mimi considers leadership to be 100% about serving her team, rather than the other way around, and is avidly committed to creating change for good in the industry. She is also a keynote speaker and thought leader. Her new MarkLives column, “Frank”, focuses on being frank and open about issues in adland.