by Carey Finn (@carey_finn) Print media worldwide might be in a bit of a pickle, with circulation in freefall, but the Sowetan is forging ahead with plans to stabilise — and strengthen — its reader figures. With S’thembiso Msomi, who was appointed editor early in 2018, at the helm, the publication is focused on expansion into areas both old and new. 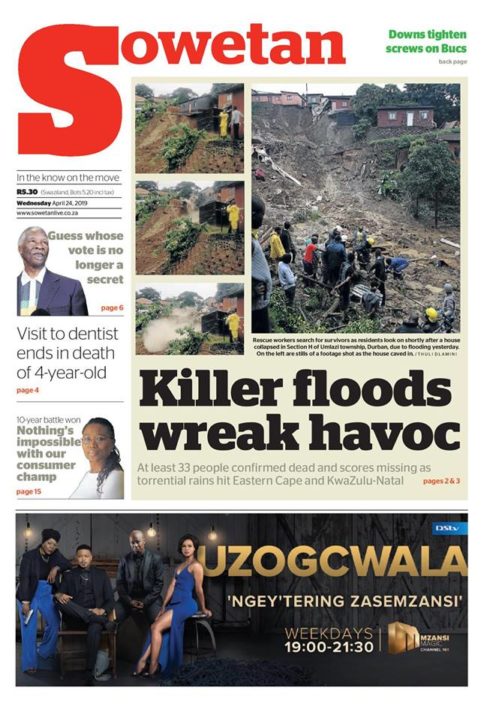 The main goal for this year, says Msomi, is boosting the daily newspaper’s circulation, which had dropped to 70 392 at the end of 2018. “A good thing for us is that SowetanLIVE is growing — it has a lot of followers,” he says. The data appears to back this up, with the site reporting more than 2.1m readers and close to 15.7m pageviews in February 2019. “But the advertising revenue that comes from the website is still minimal compared to print, so we need to stabilise print,” he says. “My goal is to make sure that we stay where we are, and let it grow.”

Msomi believes there is a chance for the newspaper to expand its presence in Gauteng by targeting areas that it’s “neglected” in recent years, in terms of both coverage and distribution. “We are called the Sowetan, but I think we have more readers in Pretoria than Soweto,” he says. “We need to go back. I feel that we haven’t done much in terms of news coming out of Soweto, so that the readers there can still believe that the newspaper speaks for them. We need to have a much-stronger presence in Soweto.”

Another area the paper will be targeting this year is Limpopo. Polokwane is a strong source of support for the Sowetan, according to Msomi, but other parts of the province could benefit from more attention. There’s also the Free State, where the paper is currently “very weak”, he says. He thinks that, if they can improve coverage of this central part of the country, it would be to the title’s advantage. “I cannot think of any other national newspaper that covers the Free State well,” he comments.

Expanding coverage of these areas, Msomi hopes, will bring in additional advertising revenue from organisations wanting to tap into the local markets: “What has been a weakness is that we haven’t been [very] present in those communities. There are advertisers who are interested in us, in the idea of the Sowetan as a newspaper that is present in the communities, involved in what is happening with communities. It’s an institution that communities trust.”

On the subject of channelling adspend to newspapers, whether online or print, rather than social media and other non-traditional media, Msomi says that the Sowetan’s strategy is very much driven by its sales department. “We have little input from the editorial side, but we do work together,” he says. “I am hopeful that newspapers like the Sowetan can still get advertising. For a long time, they were saying print is dying, but I feel that, as long as your data costs are as high as they are right now, print is still [the only] option for [many people].”

With the commercial capture of journalists a hot topic, Msomi will be working to strengthen the Sowetan’s reporting — and better protect its reporters. “I’m looking at what has happened in other newspapers and saying [we need to] do thorough checks on where we’re getting information from,” he says. “We need to go back to the basics of journalism, where we insist that everyone has to speak on record unless they have a compelling reason to give the information anonymously.”

He believes that a key factor in the alleged corruption of media practitioners has been a false sense that the press is unassailable: “I think one of our problems as the media industry has been to believe that we were immune. We should always be vigilant. We should not assume that, because we are journalists, our industry is not going to be used. What we need is to create institutions within our industry that guard against manipulation by politicians [and others].”

He urges caution against rushing to pip competitors by breaking news stories first, if the scoop comes at the expense of comprehensive fact-checking. “Rather be the one who does it last but does it well,” he says.

Carey Finn (@carey_finn) is a writer and editor with a decade and a half of industry experience, having covered everything from ethical sushi in Japan to the technicalities of roofing, agriculture, medical stuff and more. She’s also taught English and journalism, and dabbled in various other communications ventures along the way, including risk reporting. As a contributing writer to MarkLives.com, her column, “Press Pass”, is a monthly feature spotlighting media leaders and their responses to the trends and tribulations in the industry.