by Herman Manson (@marklives) Dentsu Aegis Network has acquired a majority stake (52.05%) in FoxP2 Holdings after clearing final regulatory hurdles in the form of the Competition Commission; the deal was first announced in October 2017. FoxP2 Design, its design studio set up by Andrew Whitehouse, also forms part of it.

FoxP2 — voted “The one to watch in Cape Town in 2018” in our MarkLives Agency Leaders’ Most Admired Poll 2017 results for Cape Town — has always been rated as one of South Africa’s most-creative agencies. It operates out of Johannesburg and Cape Town, and has 83 expert employees. For the year ended 31 December 2016, the agency recorded revenue just over R61m in revenue. Key clients includes Diageo, Namibia Breweries, Hyundai South Africa, Stanlib, Budget Insurance and FNB. Its “Butterfly Effect” and the Elephant Whisperer ads for Coronation Fund Managers remain iconic pieces of South African advertising.

According to Charl Thom, FoxP2 group CEO, the agency will have three sets of shareholders: Dentsu Aegis Network, a staff trust and the founding partners (Whitehouse and Justin Gomes, alongside Thom, in Cape Town, and Grant Jacobsen in Johannesburg).

Informal discussions started two years ago: the FoxP2 team was attracted by the innovation and technology Dentsu Aegis Network would bring to the table, alongside scale and a footprint across the continent. In return, Dentsu would score both a creative agency and a design agency, two gaps in its local portfolio. The agency partners were looking for a network that would respect the agency culture but also added muscle, says Whitehouse. Where other networks already had multiple creative agencies (and are consolidating them, as in the case with WPP), DAN had none, putting FoxP2 in a rather unique and enviable position.

“Humility and respect are the building blocks of Japanese culture, so it took us a year to really find out all of the Dentsu achievements,” notes Grant Jacobsen, a partner in the Johannesburg office. “And so many of these achievements transcend advertising, which is what really excites us.”

Nothing changes for clients

Thom says the respective management teams have gotten to know one another well over the last two years; the relationship was essential to securing the deal. Nothing changes for clients — the founding partners remain in place and remain personally invested. The agency now has greater access to talent, strategic tools and a much-wider network which will benefit current and future clients.

“Dentsu Aegis Network SSA is gaining momentum rapidly in the region, and our clients are looking to us for holistic services in many markets,” comments Dawn Rowlands, CEO for Dentsu Aegis Network Sub Saharan Africa says. “Creative services only represent 15% of our revenue, currently making this environment an ideal space to grow our business. It helps us set a high level of standard across the region and will help accelerate capability regionally. We expect high levels of collaboration across our local agency partners to deliver highly relevant work locally.”

In terms of a staff trust, DAN has created a black economic empowerment (BEE) ownership structure within the DAN South Africa group of companies; beneficiaries are selected from the entire DAN group, including all its entities, which will include key black employees from FoxP2.

The team is excited about the evolution and next chapter of the the agency, says Gomes, and is looking ahead to tackling some of the bigger players in the market. 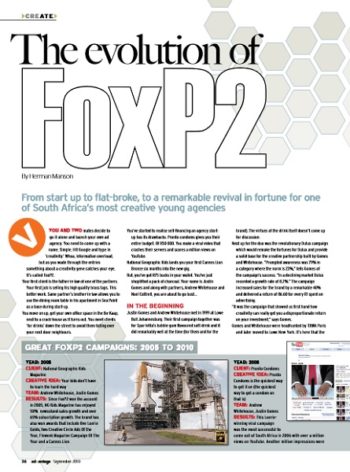 Read the startup story of FoxP2 that MarkLives editor, Herman Manson, did for the now-defunct AdVantage magazine in 2010.

You and two mates decide to go it alone and launch your own ad agency. You need to come up with a name. Simple. Hit Google and type in ‘creativity.’ Whoa, information overload, but as you wade through the entries something about a creativity gene catches your eye. It’s called FoxP2.

Your first client is the father-in-law of one of the partners. Your first job is selling his high quality brass taps. This better work. Same partner’s brother-in-law allows you to use the dining room table in his apartment in Sea Point as a base during start-up.

You move on up, get your own office space in the Bo-Kaap, next to a crack-house as it turns out. You meet clients ‘for drinks’ down the street to avoid them falling over your next door neighbours. You’ve started to realise self-financing an agency start-up has its drawbacks.

Pronto condoms gives you their entire budget. Of R50 000. You make a viral video that crashes their servers and scores a million views on YouTube. National Geographic Kids lands you your first Cannes Lion Bronze six months into the new gig.

But, you’ve got R75 bucks in your wallet. You’ve just shoplifted a pack of charcoal. Your name is Justin
Gomes and, along with partners, Andrew Whitehouse and Noel Cottrell, you are about to go bust…