by Herman Manson (@marklives) “We live here. We get it” reads a quote mounted on the office walls of Aggrey & Clifford [view agency info via Ramify.biz]. The independent Tanzanian agency offers a range of communications and advertising solutions to clients, ranging from a roving sales force on motorcycles for a leading cigarette brand (with sales data and KPI being tracked by the client via an app) selling and delivering product to the Tanzianain equivalent of South Africa’s spaza shops to creative, activations, digital, media buying and PR.

Founded in 2009 by Rashid Tenga (CEO), a Tanzanian copywriter trained in the US and who has an entrepreneurial streak, the agency landed its first big break when it won Zantel (part of Etisalat) in 2010 and its second big break in February 2013 when it won the Vodacom creative account in Tanzania following a three-way pitch. It since lined up a client roster that includes SABMiller brands (acquired by Anheuser-Busch InBev in 2016) Kilimanjaro Lager, Safari Lager, Castle, Castle Light and Castle Milk Stout (media planning and buying), National Bank of Commerce (NBC), Coca Cola (PR), Nestle (BTL), Barclays Bank (Digital) and Unilever (BTL).

The agency also has an office in Uganda which employs 10 people and has an affiliate agreement in place in Rwanda with ION Advertising. Kenya is its most-recent entry, although still a one-person operation. The agency wants to establish itself as a leading micro-network on the East African market, says COO Cobus van Zyl. The Tanzanian office employs 60 people fulltime and 200 on contractual basis through its BTL and Distribution division.

Van Zyl, a South African expat, has been involved in the Tanzanian ad industry for many years, first as a business unit director for FCB Tanzania and then as co-founder of Dar es Salaam-based Roots Marketing Communications. He joined Aggrey & Clifford in 2012, having worked with Tenga previously on the Vodacom business (in his FCB days). Today, Van Zyl spends a lot of time in South Africa drumming up business from SA clients active in the East African market.

For Van Zyl, Aggrey & Clifford — in a nutshell — is about creating great brands locally. It manages to mix the reality of a developing consumer market with the skill and standards brands expect in developed economies. The agency is proud to produce effective work developed by Tanzanians that is understood locally. Its culture, says Van Zyl, embraces a collective, inclusive way of doing business, and is founded on strong personal relationships, both between staff and with clients.

The Tanzanian advertising market is relatively young, the consumer economy having only emerged over the course of the last 20-odd years as the economy has been liberalised. It’s a strong WPP market, thanks to Scangroup, the leading East African agency network in which WPP acquired a majority stake in 2013. Scanad Tanzania, Ogilvy Africa Tanzania and J. Walter Thompson Tanzania are the three Scangroup agencies active in the country. Dentsu Aegis Network also has an office in the country. SmartCodes and AIM Group are the leading digital agencies. AIM group  recently expanded its offering to through-the-line.

There is also a number of smaller agency plays, says Van Zyl, who estimates the total Tanzanian agency market as valued at between US$17–22m (agency revenue, not total ad spend). Scangroup controls around US$6m and Aggrey & Clifford controls US$3.5m. Big client pitches (Coca-Cola or similar) come up two or three times a year.

Training and upskilling staff are the greatest challenges facing any Tanzanian agency, says Van Zyl, who in the past has invited South African ad school Vega to visit the agency and present courses. The agency has its own apprenticeship academy. Art directors are nearly impossible to find locally, he says. Even so, the agency generally isn’t keen to import expats from other markets, not even Kenya, given how local nuances get lost in translation.

According to Van Zyl, local brands are upping their game as new entrants enter the market. Thanks to the high uptake of 4G internet, consumers are well-informed, with access to information on similar services and products in other markets. Their expectations have adjusted accordingly. Still, the need for education remains considerable — a survey of 100 bar tenders for a new whiskey brand entering the market revealed that only half of them knew the difference between whiskey and brandy, making the agency question the value of pushing terms such as “triple distilled” in local advertising.

Aggrey & Clifford intends retaining its independence, says Van Zyl, and will continue to add new clients to its portfolio. More and more, clients view the agency as a total solution for setting up in Tanzania. He’s even had requests for help in setting up warehousing. The agency intends to continue pushing regional work by and for East Africans, says Van Zyl, and become involved in new and interesting links in the value chain as brands try to set up shop in this key East African market.

Aggrey & Clifford managed the 360-degree launch of Mpawa to the Tanzanian market. A real innovation from Vodacom in mobile money space, it is essentially a savings and loans product to complement the already successful M-Pesa.

The objectives of the campaign were twofold. First, we had to create mass awareness that you can now save, earn interest, and apply for a loan through Vodacom. Secondly, Tanzanians don’t have a culture of saving, so we had to design a campaign that changes behavior and encourages saving.

The agency came up with the name Mpawa, which is Swahili slang for “power”. It also plays on the English “empower”, which is what the product will do for so many local Tanzanians. The name (which can also mean “gifts” in Swahili) also worked well with the launch campaign message of “Fikia Malengo” or “See your plan through.” The campaign focused on sketching, literally with white chalk, what could happen if you saved, or got a loan from Vodacom.

To take an existing route-to-market model and expand on it to achieve incremental growth in volumes through deepened market penetration and improved service delivery.

A KPI-driven last-mile delivery model was set up by deploying 100 motorcycle-salesman nationwide and pairing them with an in-house built application. This tracks every outlet visited and transaction completed in real-time and relays this information to a web-based dashboard for instant review and extraction for reporting.

Within three months, we have seen consistent information coming in to support growth in market penetration (+15 000 outlet increment), daily strike-rate grow from 50% to 85% and call completion rise from 50% to 90%. 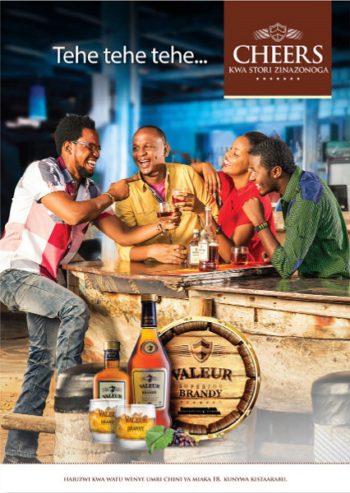 Valeur brandy is the second-biggest seller in the TDL (Tanzania Distilleries Limited) portfolio. Despite this position, it has always been considered the little sister of Konyagi, the biggest-selling spirit in the market. Although Valeur has high top-of-mind awareness, it failed to translate to sales. Several campaigns, over the years, did little to improve the sales figures and, due to multiple messages, created a confused brand positioning.

In 2015 Aggrey & Clifford was briefed to rethink the brand and so started a strategic process, in collaboration with the client, that would last six months. It included a full brand audit, consumer focus groups and concept testing. All the groundwork finally led to the launch of a campaign entitled “Cheers to good stories”. Considering the social nature of Tanzanians, it was a natural fit as the sharing of stories is common practice. Storytelling also fits into most occasions and transcends barriers in terms of class, religion etc. In short, everyone tells stories, everywhere, all the time!

To create mass awareness, billboards were used across the country, depicting the natural ways people chat over a drink. Radio ads were a variety of stories told in a social environment, some with humour, others with suspense, but they all had positive endings. The strategy was translated to an activations concept called Comedy Nights, where people could take the open microphone and tell their stories to win product, prizes etc.

The activation campaign was so popular that it was evolved the next year to include a Comedy Talent Search, where the winner of the best storytelling, across the country, won a big cash prize. This campaign extension made use of the most popular Tanzanian comedian, Evans Bukuku, as the chief judge and mentor.

The simple and effective campaign contributed to the brand growing sales month-on-month, allowing Valeur to even steal some share of the market from Konyagi. During a time where the entire spirits category had been in decline, Valeur managed to grow by over 55% in volume year on year.