Ad of the Week: Burger King gets fancy with le burger

by Oresti Patricios (@orestaki) The Jupiter Drawing Room (Cape Town) and director Mfundo Mkhize of Ola! Films serve up a chicken burger on a silver salver, with a healthy dollop of tongue-in-cheek, for Burger King’s new Tendercrisp offering.

Founded in 1953 as Insta-burger King, the fast-food chain now known as Burger King was set up as direct competition to McDonald’s. As of 2016, Burger King reported it had 15 738 outlets in 100 countries, of which 99.5% are privately owned and operated. Almost all operate under a franchise model. A fairly recent addition to the South African fast-food scene, Burger King opened its first branches here in 2013, three years after it launched in Russia and only shortly after starting in China. Africa is seen as a growing market, with its youthful population and expanding middle class.

Tendercrisp. It sounds like a contradiction in terms but a good chicken schnitzel should be just that: a crisp and crunchy coating on the outside, juicy and tender on the inside. Stuff one of those into a bun with some salad, cheese and sauce, and you’ve got yourself a chicken burger fit for a king. The latest TV commercial for Burger King (SA) plays on the royal association of the name, and takes it into a realm of fun and quirkiness that’s hard not to crack a smile at.

A young couple is sitting in a Burger King restaurant. The man exclaims, “Man, this new Tendercrisp is fresh and fancy.”

It’s a made-up word that sounds French and fancy, and this sparks a flight of fantasy for them both. A whip-pan transitions to the man, who is suddenly well-dressed and has a stylish hair and beard. “Freshly cut tomato,” he says, also with a French accent.

The successive scenes all get more fantastical, ending with the man sitting on a bling motorbike, framed by flames, to deliver the line, “Crispy”. The woman is seated on a divan, dressed like some sort of African royalty, with a posh butler in attendance. Her line is, “And how ridiculous is this chicken breast?” — as if in reply to the ridiculousness of the previous scenes. Oh, yes, and there’s a Great Dane too, just for good measure. 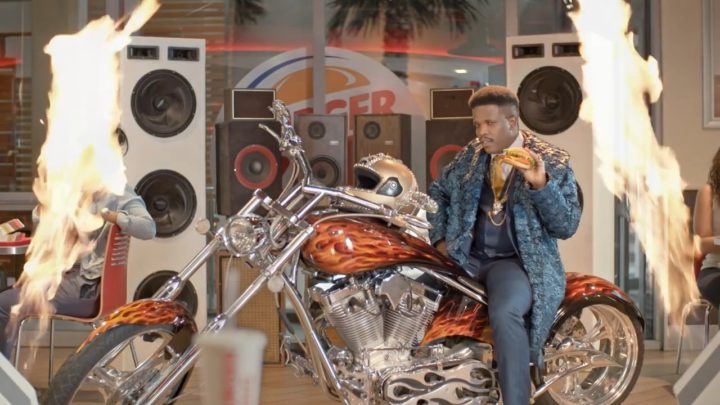 All these scenes take place in the restaurant, with the other patrons carrying on in the background as if nothing were out of the ordinary. The final shot is a close-up of the silver salver the butler has been holding. He lifts the cover to reveal the Tendercrisp burger, fries and drink. The voiceover says, “It’s fresh and fancy. Try the new Tendercrisp.” The price is flashed on the screen, as well as Burger King’s slogan, “Taste is king.”

The soundtrack is an interesting mash-up of hip-hop beats and neo-classical music, giving each scene a unique feel. The overall styling is clean and fresh, and I noticed that the man is always dressed in the blue from the logo, while the woman is always in the complementary red.

This ad sets the brand apart from other fast-food outlets. It establishes Burger King as fun and playful while, at the same time, showcasing one particular product in a unique way. The chicken burger certainly looks fresh and tasty.

The idea of using French accents to create a ‘fancy’ atmosphere reminds me a little of the Wimpy Ad from way back, which created a meme of the catchphrase, “I love it when you talk foreign.” Perhaps some of the lines from this ad will catch on in the same way?

All the same, it’s an entertaining and memorable piece of work that does as much for the brand as it does for the product. Keep it up, Jupiter Drawing Room and Ola! Films. I look forward to more of your quirky humour.