Ad of the Week: Who’s your daddy?

by Oresti Patricios (@orestaki) Father’s Day is coming up and you won’t find a sweeter, more-endearing campaign to celebrate this special day than the spots created by Woolworths’ own in-house agency.

My favourite Sunday is coming up real soon. That’s right. I’m talking about the third Sunday in June, which is Father’s Day, when the dads in the room get all the attention. Seriously though — fathers play an important role in children’s upbringing and Father’s Day enables society to really think about what it means to be a dad.

Yes, there are the naysayers. Father’s Day is sometimes criticised as being a commercialised holiday but here’s a little nugget that disproves that. This special day for dads dates back to the Middle Ages, when it was celebrated in the Franciscan Catholic calendar as St Joseph’s Day (on 19 March). It only became an official civic holiday in the US after social activist, Anna Jarvis, promoted and established Mother’s Day in 1908. While many countries around the world stick to the date of the original St Joseph’s Day to celebrate fathers, and others have established their own holiday, most follow the lead of the US.

To celebrate this Sunday, 18 June 2017, Woolworths’ internal agency has produced a campaign that circulates around the idea of “Dadding Like a Boss” — or, if you prefer the hashtag, #daddinglikeaboss. Yes, another noun that’s become a verb: welcome to “dadding”. It’s like adulting but comes with greater responsibility because — children.

Being a dad, according to the Woolies campaign, is about teaching your kids how to camp (in the garden), play video games, dress “cool” and take naps, among other things. But, most of all, it’s about spending quality time and having fun, because we all know those times are fleeting. 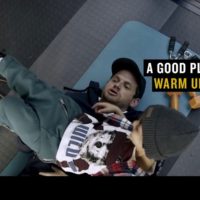 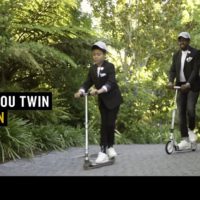 The made-for-web video ad, which has also been edited into four shorter variations, features comedians Nik Rabinowitz and Kagiso Lediga (and their various children: Lediga has a son and Rabinowitz has two sons and a daughter). At the same time, Woolworths is running a competition, inviting customers to vote for which one they think is “dadding” better. Rabinowitz and Lediga have similar deadpan-comedic styles, so the ad plays on this very South African style of humour.

The ad takes the form of a series of “tips” on “How to Dad Like a Boss”, with Rabinowitz and Lediga as the “experts”. The whole ad is shot in a mockumentary style. “I don’t like to use weights,” says Rabinowitz. “I like to use small humans.” He is seen doing bench presses but, instead of barbells, his son is being lifted, and the text, “A good playtime warm up is key.”

When it comes to camping, Lediga’s tip is: “Impress with your outdoor skills”. Lediga and son are in a tent (which is revealed in the wide shot to be set up on a well-manicured lawn). “The great outdoors. Wild animals, fresh air. And listen to that,” says Lediga.

“The Boeing 747,” says Lediga with the air of a connoisseur.

I’m going to leave it to you to watch the ad, because the humour is really in the performances. It’s also lovely to see how the kids seem to be enjoying themselves. And it’s worth checking out the 30-second versions as well, as these are more focused on one particular topic, such as braaing marshmallows and dressing to impress.

He Gets All the Fans

The Man That Can

Unlike other retailers, which try and steer their message towards specific merchandise on offer, Woolies is dialling down the hard sell and focusing on the more “warm and fuzzy” social aspects of the holiday in this campaign. The accessories and clothes used in the commercial are secondary to the message, which focuses on the positive aspects of fatherhood, and which speaks directly to the aspirations of the Woolworth’s target market.

Congratulations, Woolworths and Woolworths Agency, and thanks for giving us more than a good chuckle. Fathers are really special human beings; my father has taught me more than I could ever have hoped for.

And the journey of being a father myself? It’s been the best adventure that I could ever have. I haven’t always ‘Dadded Like A Boss’ because I had two children who would often outsmart me, but I have loved them with every ounce of my being and then some.

Happy Father’s Day, dads! And thanks to Woolworths for celebrating this special celebration for Dads with such wonderful humans and humour.