Ad of the Week: This is about us!

by Oresti Patricios (@orestaki) When European brands start invading your country and your market, what do you do? You remind everyone why your brand is so great. You speak to your market with an inclusive message that makes everyone feel part of a movement that is bigger than all of them. You beat the drums to remind the world the reason that Tusker is the king of Africa.

The oldest, and best-loved, beer in East Africa, Tusker — the beer brand owned by East African Breweries Limited — has been raising its metaphorical fists for a “bare knuckled fight for the control of Kenya’s lucrative alcoholic drinks market”, according to Kenya’s Daily Nation. This feature on the ‘beer wars’ states that the newcomers are courting taverns, restaurants and consumers with “endless promotions and price cuts, billboards and the media”. The battle lines have also been drawn in court over distributors, and who controls what turf. East African Breweries Ltd is hitting back hard, and part of this is an advertising campaign that employs higher-purpose marketing that talks, as Cheryl Hunter writes here on MarkLives in Shelf Life, of togetherness.

This particular ad from Net#work BBDO and director Dan Mace of Groundglass tells the story of a sound recordist, known as Kaki, who travels around Kenya to collect the sounds of all the different tribes and regions. The 60-second ad starts with a close-up on the letters “US” of Tusker, with the voiceover, “What if all of us came together, to do something incredible?” This is followed by a fast-paced montage, set to the music created by Kaki. City scenes, a ‘tuk-tuk’ taxi, followed by a sped-up shot through the city streets, match-cut to a zoom-out shot to the top of a building, where a group of people dance in unison. 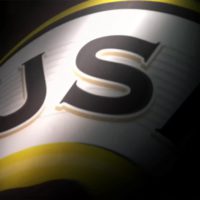 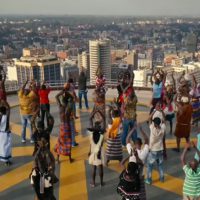 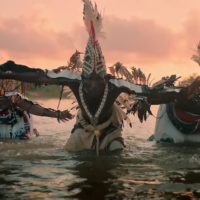 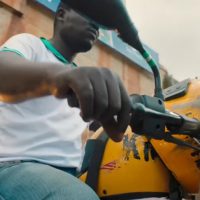 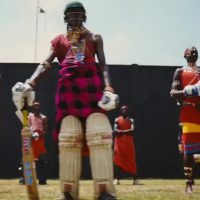 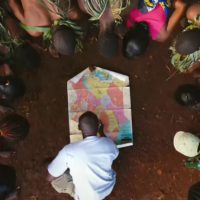 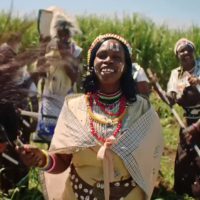 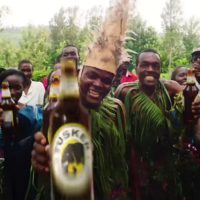 “An anthem, made from all of us,” the commentary continues. Now the montage takes us on a journey through various ethnic groups throughout Kenya and their traditional musical instruments: drums, flutes, stringed instruments, cow-horns … and then other sounds, such as spears clashing, vocal sounds, soccer balls, motorcycles, grain being ground — all combine to build a ‘sound canvas’ that is only, purely, Kenya.

Kaki and his boom-microphone is glimpsed in a couple of places, and then the scenes transition to the studio, where the sounds are being processed and morphed into something else, with electronic beats added. This pushes the story to a more urban environment, and the montage becomes more urban, with breakdancers, taxi-drivers, cricketers with their pads over their traditional garb… the ‘crack!’ of a cricket bat on ball provides a musical punctuation point, and the montage speeds up to match the more ‘electro dance’ soundtrack that emerges.

The song is now fully formed, with all the previously recorded sounds making up part of the whole. The montage moves to the various areas once more, where the differently attired people are all dancing to the beat of the song. The montage climaxes with a match-cut sequence of different people toasting with a Tusker bottle — the hand that extends from the camera’s perspective holds a bottle that is matched in movement by the happy, smiling people in the frame. The commentary concludes, “Here’s to the ‘us’ in every Tusker,” — and the camera zooms out from the ‘US’ of the label, to a full pack shot, with the same slogan.

The producers of the video, Groundglass, have also published a ‘behind-the-scenes’ version that tells more about Kaki’s innovative approach to sound. It really is worth a look!

The advert is loud but subtle. It is a war cry that’s all about national pride. The “us” in the commercial is Tusker, but it’s about the bigger battle. This war is about buying local, about supporting home brands, and about investing in the regional economy by staying true to Tusker. As we’d say back home, the message is ‘local is lekker’. It is a clever, inclusive message that is borne of the purpose of tribe, the statement that there’s no place like home.

At heart, we’re all patriots; we all want to belong; we all want to be a part of something that’s bigger and greater than us. This is a cunning campaign that is all about harnessing the power of purpose and national values.

I’ve been reading Purpose: The Starting Point of Great Companies by Niko Mourkogiannis. In it Mourkogiannis writes: “Not all companies have a Purpose—but enduringly successful ones do. Purpose.” What’s startlingly evident from this commercial is Tusker’s purpose, which is evident in the brand’s slogan: “Refresh Your Roots”. Brewed from 100% African ingredients that are locally sourced, Tusker is reminding the market that it’s the home team, and that the home team must win on home turf. Cheers, East African Breweries, Net#work BBDO, and Groundglass. Here’s to the us in every glass!