Ad of the Week: Like a bolt out of the blue

by Oresti Patricios (@orestaki) With the advent of fibre technology in main centres throughout South Africa, competition is on between various ISPs and fibre providers for a piece of the market. The current campaign from Telkom, by newly signed agency DDB and directed by Figment’s Robin Goode, draws upon both the celebrity and the cute factor with a heartwarming TV commercial.

When Telkom signed with Usain Bolt late last year to be the spokesperson for the brand’s fibre offering, eyebrows were raised in certain quarters, especially as personalities of Bolt’s stature don’t come cheap, and South Africa has local sporting heroes who would also resonate with the target market (Wayde van Niekerk comes to mind). Not to discredit Bolt — the Jamaican is the first man ever to hold both the 100m and 200m world records, as well as the first man to win six Olympic gold medals in sprinting.

Tons of originality and impact

Bolt’s performance in the campaign so far has shown him to be really charming, and the marketing for the new brand — dubbed “Boltspeed” for Telkom’s fibre-to-the-home offering — has tons of originality and impact. The latest spot, which is an inspiring story featuring a two-year-old boy as Bolt’s prodigy, takes the viewer into a fantasy world, where the real star is actually the young boy. The ad starts with a gaggle of reporters surrounding Bolt on an athletics field.

One asks him: “Usain, do you see yourself going into coaching?”
“Yeah, I’m actually working with someone at the moment — a real talent,” says Bolt, in his broad Jamaican accent.

The scene cuts to shots of a young boy sprinting on an athletics track, and being followed by a camera on a track. Then follows a montage of Bolt and the boy running in the street at sunset, Bolt coaching the boy in the gym, the boy skipping, the boy doing press-ups (with a hand-clap!) and then more running on the track. The montage continues with the two running up the stadium steps, then watching the slo-mo footage taken by the tracking camera, and discussing his form.

The little boy is absolutely charming. He listens to Bolt with intense concentration and, as he exercises, he has an expression on his face of resolute determination that belies his age.

According to publicity material released by Telkom’s agency, DDB, Bolt was only available for three hours, as he is currently in training for the Olympics. The director certainly had his work cut out for him. Essential scenes were shot with Bolt, and some clever tricks were used to thread the whole ad together — including, I expect, using a body-double for long-shots. CGI was also used to allow the young boy to perform impressive feats of strength, including pulling Bolt on a sled, but this is kept to a minimum and mostly used for the long-shots. 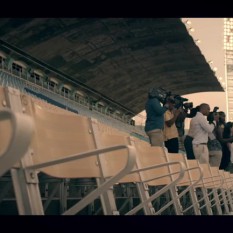 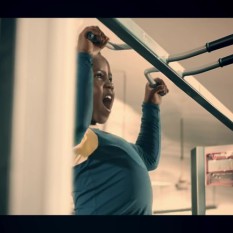 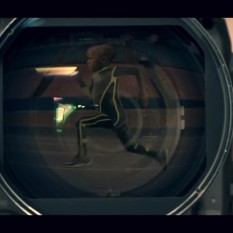 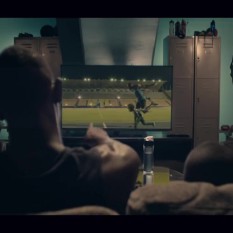 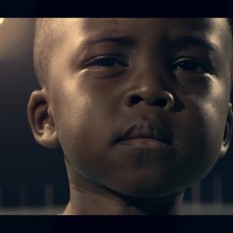 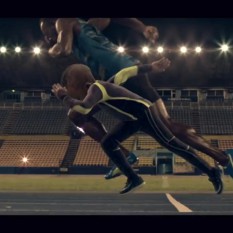 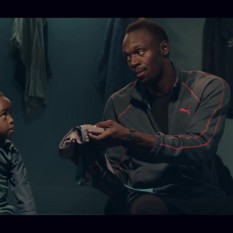 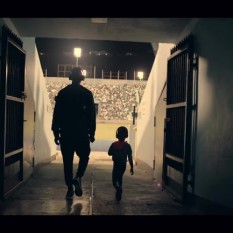 Getting back to the ad, the montage tells a story of persistent training, resulting in the boy achieving impressive results. The first mini-climax of the story is when Bolt gives the boy a new tracksuit, which appropriately has the Telkom colours. The final climax is when the two arrive at a lit-up stadium, to take part in a race in front of a huge crowd.

The rest of the runners are adults. The camera cranes down to the boy as he takes his marks. There is a closeup on the starter’s pistol, followed by one on the boy’s face. Once again we are treated to his focused, resolute expression. Cut to a wide shot as the pistol fires, and the title appears: “The next generation of fast is here.” Suddenly a tiny figure runs across the screen, way ahead of the field.

The final scene is of Bolt with the boy on his shoulders, walking home in the dusk. The title “Boltspeed Fibre” appears, followed by the Telkom logo and slogan, “Tomorrow starts today.”

The ‘next generation’ concept, playing on the youth and ‘superhuman-ness’ of the boy, is very clever, positioning Telkom as a progressive, future-facing technology company. Telkom claims it will make fibre available to 1m homes by 2018, and the ad is part of the telecoms giant’s continued battle with numerous fibre providers such as Vumatel and Fibrehoods, which have made inroads into some of SA’s more affluent suburbs.

Overall, the production values are fantastic — the cinematography, the music, editing and locations all have a cinematic quality — and the performance coaxed from the little boy… just classic! A sure win for DDB and Telkom.