Ad of the Week: A clever life flick for Liberty

by Oresti Patricios (@orestaki) FoxP2 and Velocity Films use cutting-edge technology to great effect in a clever, illustrative ad for Liberty Life Assurance.

Retirement planning is — like most insurance items — something that people do grudgingly. But doing what’s good for you in the long term is wise, especially when you’re still young. The younger you are when you start, the better the outcome, we are told — although there are many factors that impact upon long-term investment. Analysts say that 94% of people will be unable to maintain a decent standard of living during retirement, yet deciding what to invest in isn’t easy.

Retirement annuities (RAs) have received a great deal of negative press, as they haven’t performed as well as expected, and are cynically described as a great way for brokers to make money. Into this market comes Liberty’s product, which has a dual investment strategy: one portion of your money goes into a “Guaranteed Income Fund” that ensures a minimum payout on retirement. The other portion goes into various risk-based investments from which one can choose in an attempt to grow one’s money. This latter portion would naturally be subject to the various highs and lows that risk-based investments can have.

(Disclaimer: I am not a financial advisor, and I do not endorse this product. Caveat emptor, caveat subscriptor, terms and conditions apply.)

Having described the product, let’s get into the ad that sells this concept.

The copy takes a no-nonsense approach to the idea of investment. The opening scene starts with a young couple seated at the kitchen table with their broker. “This is how most South Africans plan their retirement,” says the commentary. The camera starts to track out, and one sees that the kitchen table in the ad is suddenly in the middle of the New York Stock Exchange. An interesting ‘time lapse’ technique is introduced here as the people at the table remain in real time, but all the activity that takes place on the stock exchange floor is speeded up. 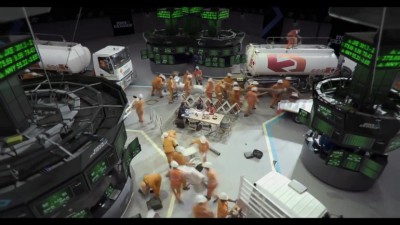 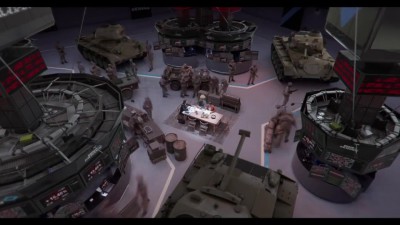 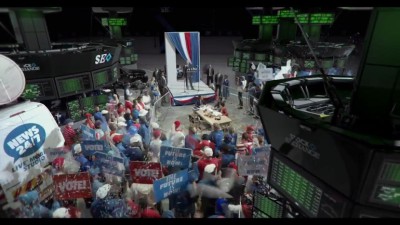 The narration continues: “But this is where those retirements are actually decided.” The camera continues to crane upwards, as oil tankers and oil workers fill the stock exchange floor. “Here, a boom in oil means your plan’s looking good…” says the narrator. The scene rapidly changes as tanks and army personnel invade the area, and the narration continues: “… but only ’til a decision to invade spooks the markets.”

The camera has now spanned a slow arc, and starts moving around and back, while the speeded-up action now changes to a scene depicting a crowd watching a political stump speech. “So how do you plan for retirement… if foreign elections can turn the markets in your favour today…” the narrator continues, and the camera cranes around to papers and dust blowing across the stock exchange floor, still with the same speeded-up, frenetic activity. “… but your returns can be wiped out by a storm in the Pacific tomorrow? Or whenever Stage 1 becomes Stage 3?”
By this time the camera has moved back in towards the kitchen table, as the winds and debris fade into darkness, and we are back in the secure home environment.

The commentary finishes off over a shot of the couple shaking the broker’s hand: “Which is why we built Liberty Agile — the only retirement annuity in South Africa that guarantees your retirement income… guarantees that from today, retirement planning can be retirement knowing.” This ties in with the payoff line at the end: “Liberty — the advantage of knowing.”

The entire sequence appears to have been one single 60-second take, one shot, from the three at the table, tracking and craning up and around, to end at the table again. This was achieved with some high-tech motion controlled rigging, called the Titan, which had to be flown in from London for the shoot. Motion-control allows a camera to move in a precise path, so that different elements can be composited in an accurate way. I imagine this required both live-action and 3D animation, and yet it is all integrated seamlessly and realistically. Given this, a special nod to the special-effects gurus and post-production mavens at Lung Animation — don’t let George Lucas poach you!