Ad of the Week: Supporting the stars of tomorrow, today

by Oresti Patricios (@orestaki) Jameson Whisky and NATIVE VML crack the social media network with a microsite and culture-focused project called “Jameson: The INDIE Channel”. By championing popular culture, Jameson acknowledges that marketing to a young adult segment is no longer about brand building or pushing product – it’s about creating value and supporting young talent. 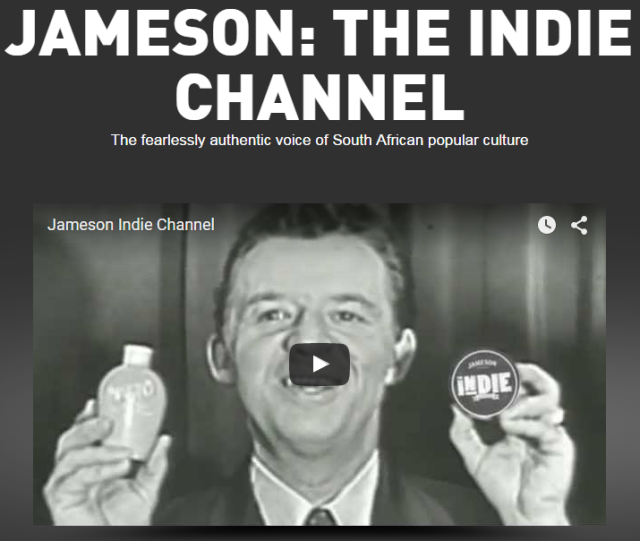 Marketing alcohol is almost as difficult as marketing tobacco in South Africa. For brands that want to reach young adults, without being criticised for targeting adolescents (ie people who are below the legal drinking age), it’s important to take an alternative approach that is more about building community than selling product.

It’s also necessary because this generation shares some behaviour patterns with younger millennials, who have also been growing up in the era of information overload. Watching content online rather than on TV, skipping commercials and multitasking (also known as multiscreening) all make it hard to grab the attention of this age group.

Younger people are part of a ‘net-savvy’ age group, and studies have shown that they pay more attention to their peers’ opinions than to advertising messages or the opinions of experts. Reaching this audience is challenging, but critical, as youth markets are emerging as the biggest local audiences.

Africa has the youngest population, with almost 200m people aged 15–24, according to the World Bank. By 2045, it is predicted that this number will double. From a population perspective, Africa’s human growth is historic. In 1950, Africa accounted for only 9% of the world’s population. The United Nations (UN) says that, by the end of this century, half of all children, and 40% of humanity, will be African. The UN says this signals the most radical change in the world’s demography in history.

This means that the world’s second-largest continent will be one of the world’s fastest growing markets in terms of consumer goods, but reaching the bulk of this market will mean being able to understand, and influence, its youth.

Jameson Whisky has taken an interesting — if not adventurous — approach to cracking this, by producing an experience rather than a product, in the form of The INDIE Channel. Hosted on a website, www.indiechannel.co.za, it is probably best described as a multiplatform project: the creators have built a virtual melting pot of creativity, with projects that include filmmaking, music production, fashion, art, photography, sport, design, illustration, tech, and events.

One of the most prolific areas seems to be the video/filmmaking section. An annual competition called “First Shot” challenges aspirant directors to submit proposals for a short film, to be funded and shot in Hollywood, under the supervision of Kevin Spacey and Trigger Street Productions. The project gets support from top actors to participate; this year’s winner will work with none other than Maggie Gyllenhaal. (Trigger Street is Spacey’s company that produced Netflix’s series House of Cards, and major motion pictures including Captain Phillips and The Social Network.)

In the music arena, The INDIE Channel promotes tours by overseas bands to SA, promotes tours by SA bands to the US, showcases new productions and music videos, and does video interviews with local musicians in a segment called “Breakfast in Bed with…”

A broad range of musicians are currently showcased. These include Nakhane Toure, Pascal Righini, Sons of Kemet and TBMO. And if you haven’t heard of any of those, then join me in feeling really old – although I must say it’s not all hip-hop and dance music – there is some really interesting stuff. No doubt some of these emerging artists will be the stars of tomorrow.

You may have heard of The Black Lips, “Atlanta’s most famous garage rockers” (they have been around for 15 years). Well, The INDIE Channel brought them to SA for a lightning tour of Joburg and Cape Town this past weekend. 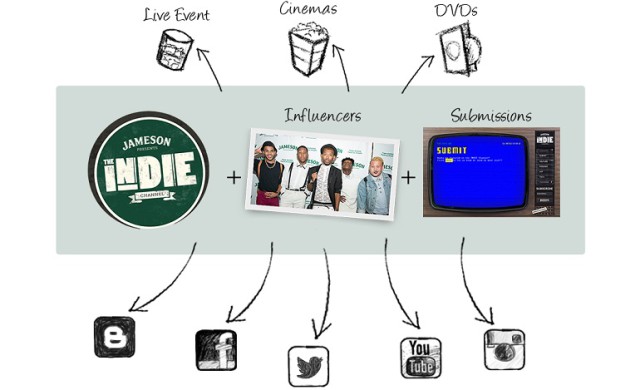 The point of all this is that Jameson has hooked onto a very important principle in internet-era marketing. Social media’s influence is growing and, in certain cases, outperforms that of conventional channels. Marketing in the Web 2.0 age is about creating content that resonates with your target market, and not merely shoving your brand down their throat.

Just being a good curator, and tapping into the aspirations and creativity of this demographic, will connect you with your target in a seminal way – almost subliminally associating your brand with the content. And it’s all about a long-term commitment to the content, building these associations and relationships over a period of years.

Jameson: The INDIE Channel really gets its target market, and creates something that is so much more than a promotional website: true value-added content that builds a strong relationship with customers who will continue to have a positive association with the brand for years to come.

A big high-five to Jameson and its oh-so-clever agency, NATIVE VML, for a relevant campaign that truly rocks.