Ad of the Week: You are feeling sleepy. Ve-r-r-ry sleeeepy…

by Oresti Patricios (@orestaki) Outdoor ads are difficult to pull off well. The best of the category depend upon a strong message and impactful imagery — or an idea that communicates powerfully at a glance. Hollard’s billboard campaign manages to do this with a simple mechanic that makes a static billboard ‘come alive’ in a subtle, yet effective way.

In the past few decades, the traditionally stuffy insurance industry has broken free of its conservative collar, and come to embrace the idea of being more approachable. Some insurance companies — enthused by this trend — have gone even further by being downright approachable to customers.

And then there’s Hollard, which has broken the mould by doing things completely differently. Not just for the sake of being different, but to reinvent the insurance category for the benefit of the people in the market for coverage.

Unlike other insurance companies which have been particularly dour, Hollard was one of the first insurance companies to take the brave and bold approach of using humour to sell its brand promise. Last year, it made us laugh with the commercial that told the story of a woman visiting a fortune-teller/psychic in order to berate her late husband, Vusi, for leaving her and the family destitute.

This year’s TV ad depicts a couple in bed, with their eyes wide open, and the narrator talking about what could be keeping them up. Whatever’s making them stay awake, though, it won’t be their business insurance.

The bottom line is that, if you’re covered by Hollard, you may rest easy because insurance worries won’t be keeping you up at night. The insurance firm’s new billboard ad cleverly builds upon this concept with the brand’s trademark sense of humour.

Eyelids that start to droop

The billboards depict different everyman/everywoman faces — huge artworks rendered as 3D, slightly ‘cartoony’ portraits. Throughout the day, these faces stare out at the traffic. But, come nightfall, the faces’ eyelids start to droop and, by the time it’s dark, the eyes are closed. Each billboard has a slightly different message. “Insure your car,” reads one. “Insure your home,” reads another. “Insure your business,” is another, and “Insure your life,” is another. Beneath this is the common payoff line: “Ensure a good night’s sleep.” 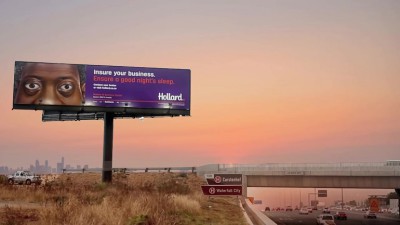 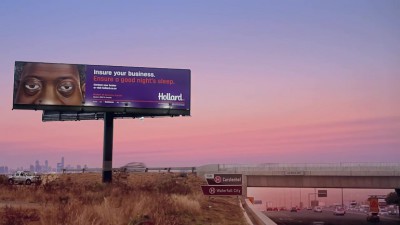 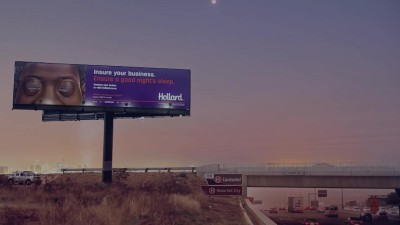 Hollard is a short-term and life insurance group, with a wide range of products on offer. The company’s roots go back to the ’50s and ’60s, when “insurance broker, Robert Enthoven, realised that insurance companies were not adequately meeting the needs of their corporate customers,” as per the insurance brand’s website.

Enthoven “had an idea to start an insurance company that formed deep and long-term partnerships with corporate customers in a way that allowed them to share in the fruits of improved risk management. Out of this spirit of true partnership the Hollard Insurance Company was born.”

Today, Hollard is South Africa’s largest privately-owned insurance group, with a turnover exceeding R15bn, and is owned by Dick Enthoven and his family through the Enthoven Family Trust. Dick’s son, Adrian, is Hollard’s chairman. Dick, now a dollar billionaire investor, is also the financier behind Nando’s, having backed the restaurant’s expansion in SA and overseas. Dick’s other son, Robby, runs Nando’s UK operation, which has over 280 outlets throughout that country. (In case you’re wondering about the Enthovens — that’s four generations of entrepreneurial nous.)

But back to the Hollard brand. Presenting a consistent message across different media is an important aspect of a good advertising campaign, and M&C Saatchi Abel Cape Town proves that one can go a lot further than just repackaging the slogan and slapping it on a billboard. Or trying to force your TV commercial concept to fit into a poster. Ad agency and client have kept the brand message consistent, but have cleverly used an execution that’s perfectly suited to the medium. In fact, the execution takes the billboard to the next level, making it media and word-of-mouth worthy.

The billboards have garnered some good local and international media coverage, and are being chatted about on Twitter and Facebook. This is great for Hollard, because it makes the brand’s advertising rands stretch even further, which should give everyone at the friendly insurance company a good night’s sleep.