by Oresti Patricios (@orestaki) Despite the shock loss against Japan in the ongoing Rugby World Cup 2015, South Africa has the enviable reputation of being one of the strongest players in the field, and that game played with an oval ball is an important part of our country’s heritage and identity. What’s vital to the future of rugby is that brands invest in the development of this much-loved sport.

That’s why I’m delighted to tell you all that this week’s Ad of the Week is Land Rover, a worldwide sponsor of rugby, and that locally the company is using this opportunity to give support to grassroots rugby projects. It’s great that this British-born brand is not only developing rugby in the UK, but also in places as far afield as Italy, Ireland and, of course, SA.

Since the Rugby World Cup’s debut in 1987, when the tournament was co-hosted by Australia and New Zealand, tradition has become a big part of the ritual. And given that the Kiwis were one of the first hosts, there’s nothing more exciting to witness than New Zealand’s rugby war cry, or ‘haka’.

A war haka was traditionally performed by Māori warriors before going into battle, and is meant to be an intimidating spectacle. It is essentially a song and dance, performed for various reasons, and there are haka for celebrations, funerals and welcoming ceremonies. 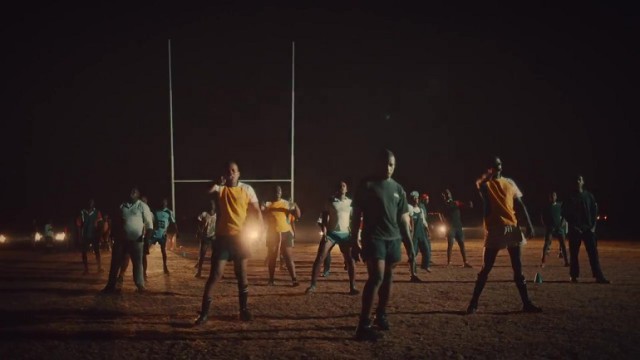 The All Blacks first brought the haka to world prominence in the 1888/1889 ‘New Zealand Native Football Team’ tour of the ‘Home Nations’ (England, Ireland, Scotland and Wales), and was subsequently adopted by the national team in 1905. Since then, a couple of versions of the haka have done the rounds, with two versions becoming the staple of the All Blacks. The team alternates between the two: one is called Ka Mate (which translated means “‘tis death”), the other called the Kapa o Pango (which can be literally translated to “team in black”).

At the 2011 tournament, again held in NZ, some teams orchestrated a response. The French linked arms and formed an arrow, slowly advancing to face the chanting All Blacks. The International Rugby Board fined the team for advancing to within 10m of the All Blacks. The Welsh stood in a solid, unflinching row, creating a standoff situation that lasted several minutes. Referee Jonathan Kaplan almost had to get down on his knees and beg to get the teams to take up their positions and play the game.

What does this have to do with the Soweto Rugby Club? There is a strong tradition of war cries in Zulu heritage, too, and in the Landrover mini-doccie on YouTube we witness this fledgling club using a traditional warcry that they refer to as their haka.

Soccer is by far the most popular sport in the former township, but many other sports have grown their adherents. During apartheid, rugby was perceived as very much a ‘white’ sport, being played from high school and upwards at government and private schools alike, and receiving sponsorship in abundance for events such as the Craven Week. When SA hosted the Rugby World Cup in 1995, Nelson Mandela famously donned the Springbok jersey and in that moment (some say) opened up the game to all South Africans.

The mini-documentary is filmed at different times of day and night. The main interview is with one of the players, who simply explains what the Soweto Rugby Club haka means, both literally and symbolically. The charisma of the interviewee is balanced by the passion and energy of the training and match-playing visuals.

We deal in real

The Soweto Rugby Club, which in a different era might have seemed out of place in this famous former township, is testament to the unifying power of sport. The players are proud of both their heritage and their rugby. And their warcry — their haka — symbolises their unity and fighting spirit.