by Arthur Goldstuck (@art2gee) When Instagram was named South Africa’s fastest growing social network, a surprise was who emerged as its biggest stars.

It may not be the biggest social network in South Africa, but Instagram is growing at a pace rarely seen in the world of online sharing. In the past year, it grew by 133 per cent in South Africa, from 1,1-million to 2,68-million users, according to the newly released SA Social media Landscape 2016 report.

Instagram started life as a photo-sharing app for iPhones, but has become a new frontier in photography and in the lives of celebrities. It is the latter who dominate the network locally, with two TV personalities, Minnie Dlamini and Bonang Matheba, each having more than half a million followers.

The next five highest-followed users are also in the entertainment game. All have one thing in common: most of the images they post are of themselves. 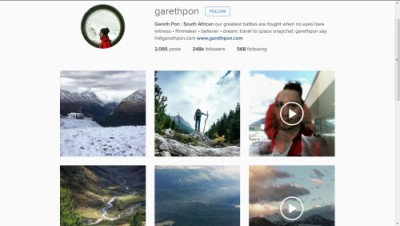 It is only at number eight that we find creative content being posted, and that is where we begin to see the true stars of Instagram emerge. The 8th most followed South African on Instagram, Gareth Pon (or @garethpon), is also the most followed photographer in the country, with close to a quarter million people on the lookout for his highly creative and original techniques.

He is followed at number 10 by landscape photographer Craig Howes at just under 200 000 followers, and then a clutch of another five photographers in the top 20. Pon is also founder of an organisation of South African “Igers” – serious Instagramers – which has grown to more than seven thousand members since it began in 2013.

He himself makes a living as a globetrotting photographer, with most of his work coming off the back of his 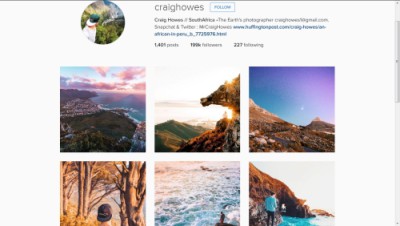 Instagram profile – and from major brands’ growing awareness of the power of the medium.

“Instagram has only started being utilised as a platform for marketing this year,” he says. “Many brands are just playing games around the space and have failed to execute Instagram as a platform for marketing. We all have a long way to go, because it’s such a new space, but if you speak to the right people and use the right perspectives, then you can use it in the most unique ways.”

His active role in building a community around Instagram is an indication, however, that he regards people as a priority.

“I believe that Instagram has a great way of showing people that they can be creative without needing to be too hard on themselves. Hundreds of smaller communities have sprung up and there are ‘instameets’ happening all the time. I just wanted to let those people find a place where they could spend time with others who have a common passion.

“The other reason I did this was to expose the beauty of South Africa to the world, in a small way. “

He pays little attention to the media personalities whose selfies and egos dominate Instagram in South Africa.

“If you engage with the platform on an international level, you very quickly realise how huge it is within the photography and creative space. All the divas, personalities and egos may have a large following, but ultimately most of them will never ever publish a beautiful image.”

Ironically but not unexpectedly, Pon is taken more seriously outside South Africa than inside. It is partly a mark of the immaturity of the platform in South Africa, but also of its rapidly increasing importance globally.

“South Africa unfortunately carries very little respect for Instagramers. I’ve worked with some reputable brands on an international level – Nike, Absolut Vodka, Mercedes, CNN, to name a few. To be honest I’ll rarely take on work in South Africa, because it consumes so much time where I could put the same time into gaining more international traction.”

Nevertheless, he remains committed to the local Instagram community.

“The initial inspiration was discovering the beauty of our cities again. As an international community we find ourselves making connections on a global scale; there are friends in every city and there is always someone who can show you the beauty of their city. I like to believe that the Igers South Africa community is the friendliest you’ll meet in the world.

“My hope is that as Instagram and the community changes, we’ll begin to see and embrace a new way of capturing South Africa. We’ll see our stories come alive through images and, as we discover our stories, we’ll see South Africa captured in a way it’s never been captured before.” 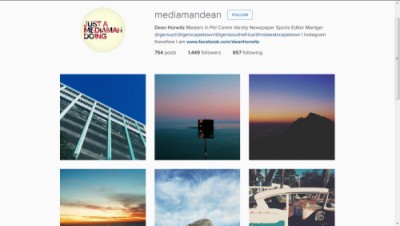 better known on Instagram as @mediamandean. He relaunched IgersUCT in 2014 as a space for sharing photos taken at UCT, and also helps out with IgersCapeTown.

“On a personal level, the biggest benefits are that you get to meet new people who share the love and passion for photography, which often translates into immediate friendships,” says Horwitz. “You get to attend instawalks and instameets, which offer opportunities to take photos of unique and different locations as well as an opportunity to meet people who you follow online. These meets and walks offer a fantastic opportunity to improve your photography, learn from other people and occasionally to work with some incredible brands.”

Correct at the time of writing

Pon has taken Instagram to a level of creativity that most casual users and followers never encounter, let alone produce. His greatest wish, he says, is that ordinary users learn some of these techniques, or at least attempt to take and post a creative photo. He has created a concise Instagram branding course on a learning site called Skillshare, at http://skl.sh/1MjuTs2. He also recommends two apps to edit images: Snapseed and VSCO 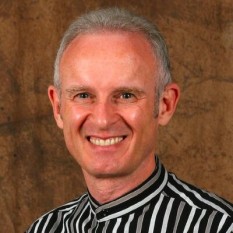