Ad of the Week: To love a tuluver

by Oresti Patricios (@orestaki) BirdLife South Africa recently maximised the power of social media for an eye-opening campaign that raises awareness about a bird species that is highly endangered, yet much reviled. I’m talking vultures, which — unlike eagles or falcons — aren’t exactly the most-loved bird species on earth.

The vulture is an important part of the ecological food cycle and, thanks to its digestive system, it helps to prevent the spread of anthrax and botulism. But most people find vultures unappealing because of moral judgement associated with the bird’s scavenger habits, and because these birds of prey are generally considered ‘ugly’.

Or perhaps it’s got something to do with the fact that a group of vultures is called a ‘wake’ or a ‘volt’.

But beauty is in the eye of the beholder, as the members of Birdlife SA will no doubt be quick to point out. This conservation organisation promotes the enjoyment, conservation, study and understanding of wild birds and their habitats, and its team of avian lovers have had enough of the vulture haters.

Normally I’m not a fan of publicity stunts based on a hoax and Birdlife SA’s local ad agency, Utopia, was aware they were going to ‘ruffle some feathers’ with this one. But I think that, overall, it was well-received, and — most importantly — made a huge impact.

International Vulture Awareness Day was on 5 September, and the agency was tasked with coming up with a campaign that would highlight the plight of this species. It came up with a simple idea: everybody makes a huge fuss when a new species is discovered, especially when that species is ‘cute’ or ‘beautiful’. But what about species which are under threat and are not so pretty, like the vulture?

It’s common knowledge that models in print ads get ‘Photoshopped’ to remove blemishes, and there are a few videos on YouTube that regularly do the rounds, showing how this is done, using speeded-up screen-captures of the Photoshop artist at work. So Utopia took a photo of a vulture and did the same, turning it into an exotic-looking bird with a beautiful crest, a straight neck and more elegant body and plumage. Birdlife SA announced the discovery of this ‘new species’, named the “tuluver”, on Facebook and Twitter — and before long it was being reported in newspapers and TV stations as far afield as India, Sweden, Australia, UK and the US. 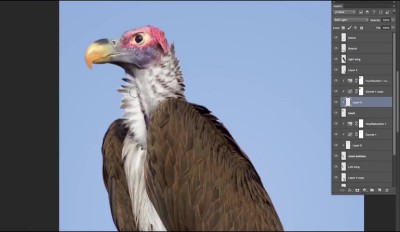 Then, on the Wednesday before International Vulture Awareness Day, Birdlife SA published the ‘reveal’: a video on YouTube, linked to on Facebook and Twitter, entitled, “Exclusive footage of ‘Tuluver’ revealed”, with the message: “To everyone who liked, hated, tweeted, debated, narrated, shared, posted, declared, noted, backed it, cracked it, wrote articles, deleted them, printed them, supported and celebrated; BirdLife South Africa and more so the Vultures, sincerely thank you.”

The video is a reverse ‘shop’, showing how the vulture image had been manipulated to become an elegant, ‘beautiful’ bird. Interspersed are brief snippets of information about how this bird plays an important part in the environment.

The final message is: “If we can get this passionate about discovering a new species, why can’t we get as passionate about losing one? Let’s share some love for the beautiful, real bird that needs us now more than ever.” The word ‘tuluver’, the video reveals, is an anagram for ‘vulture’.

Once again, social media erupted and, although some people were upset at being ‘tricked’, the feedback was for the most part extremely positive; it seems most people don’t mind being fooled, as long as it’s for a good cause.

I think it was an extremely brave move, and I’m really happy that it paid off. As a nature-lover, I have to commend both Utopia and Birdlife SA for an effective, powerful campaign that once again demonstrates the power of social media and how it can be used to change perceptions.

What can I say? I’m now a die-hard vulture lover!