by Gill Moodie (@grubstreetSA) Last year 5FM’s Gareth Cliff struck out on his own and started CliffCentral.com that goes out on web and WeChat. This year Kagiso Media has launched an app curated by Barney Simon — the legendary alternative DJ from Radio 5 days.

Like CliffCentral, the Barney Simon app is breaking new ground in reaching audiences in a new way with new tech but it also has the potential to disrupt the traditional radio advertising model.

Today Simon is a presenter on Jacaranda FM, which is owned by Kagiso. 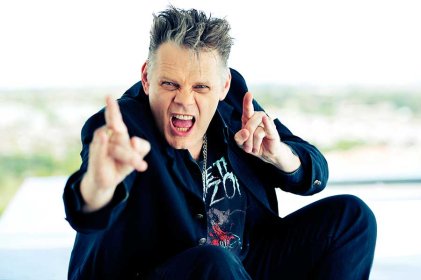 Vincent Maher, Kagiso’s chief innovation officer, told Grubstreet: “This is our first stab at doing some audience measurement of internet radio… We’ve reached a point where we feel that it would be a good time to start thinking broadly about what internet radio means.

“How does a media company that focuses of radio differentiate itself online? It’s a strategic question that needs to be answered.”

Streaming of Kagiso’s radio stations has tripled organically and with no special effort in the past year, says Maher, whose innovation team developed the Simon app, called “Rock On”.

Maher believes content curation by well-known personalities is the key to differentiation.

“That’s where we are with Barney,” Maher says. “ The test is how well people respond to personality-driven streaming radio in a niche genre. Barney’s really well known for rock ‘n roll and he resonates well with the 35 to 45-year-old audience, who probably grew up with him in their teenage years, when he was guiding people from predominantly pop music through to alternative and rock ‘n roll in South Africa. And he’s well known for promoting local bands.”

Simon told Grubstreet: “I worked at Tuks FM (at University of Pretoria) for five years when I left 5 because I had nowhere else to go to play my music and then I came to Jacaranda. But I obviously can’t play that stuff here.

“Then Kagiso approached me and said: ‘Do you want to do your own thing and play what you’ve played for the last 30 years – bring back all the memories?’ I’ve got boxes full of demos and interviews and live concerts – and they’re just lying there so this is something I’ve always wanted to do. And it’s all about the music once again.

“I’m honoured to be a part of this amazing tech that Vince and the guys have come up with,” Simon says. “It could have gone to someone with a bigger name but they’re trying it with me… In the old days I was the metal guy. I wasn’t commercial enough and I couldn’t play my music during the day. Now it’s turned around and they believe me. It’s brilliant.”

Rock On is the first of a series of “deployments and tests” in niche content streams curated by personalities, Maher says.

The stats for Rock On include a total average listening time of 25 minutes on Android and 32 minutes on iOS while active users are in the thousands, Maher says. There is about 60% retention month on month, which is slightly higher on iOS than Android.

Maher says the app is on track to reach a projected 23 000 monthly actives by December.

“If we get to 100 000 users on a rock ‘n roll app, we will have won,” he says. “Then we can ask what within the portfolio of different genres of music and tastes and content in your life, how do we match those with apps that deliver really custom-made content.”

Rock On had a soft launch in May and is relying mostly on word of mouth for marketing at the moment to allow Maher’s team to do development with agility. At the moment, therefore, there is not much to the app besides playlists and jingles as the team works out what features the audience really want.

For instance, users started asking for “Uncle Paul’s Bedtime Stories” so this has been introduced.

“(We want to find out) do people really care in streaming audio about anything else other than streaming audio, particularly when we’re paying attention to car integration?” asks Maher.

Premium on-demand custom content such as profiles of bands, in which Simon can share his extensive knowledge of the alternative scene, is in the pipeline and there is the capability to switch the app to live cast such as at live music events.

“That’s the kind of stuff we want to do,” Maher says. “Radio is a mass audience thing but it’s never going to satisfy everybody at the same time. People are becoming more niche.

“We don’t want to be an algorithm. That’s quite crucial for us. What we want to do is put a human into the music who weaves it altogether and explains why this piece influenced that piece.”

Simon says other elements to be introduced include rock news and charts, and he is also working on getting locals bands involved.

“When you drive in the car, I’m still your friend,” says Simon. “There are so many streaming channels these days, this one has to stand out. Every song has to be picked and thought gone into what plays before and after.

“Radio has changed a lot. Technology has changed it and it’s so visual now,” he says. “I can be on air and do theatre of the mind. Say there’s been a car crash in front of me and I go on air and say I saw someone fall out and petrol spill and the thing exploded, it’s theatre of the mind. People will still believe what I’m telling them but if I say I just posted a little selfie of me standing next to a person who’s just died, I’ll get more hits that way than telling the story… With this app, you can still use your imagination.”

When it comes to ad revenue, how do you compete with the audience reach of big traditional radio stations?

“It comes down to the quality of your analytics and that’s where we’ve been putting in tons of effort,” says Maher, “We’re going to be able to sell adverts to individuals but in a broadcast model.”

“How are we going to make money in the long run? Our view is around aggregating detailed consumer information… and using that to deliver audio advertising… in a way that feels contextual.”

“A lot of people started this before we did – like Ballz.co.za (with Darren Scott) and with their app,” Simon says. “They’re dong amazing things with sport and Gareth Cliff’s revolutionised radio. But we’re the first to stream alternative music in South Africa.

“I think the timing is perfect for this,” says Simon. “And we’re having fun and learning new stuff.”