Ad of the Week: The horse whisperer

by Oresti Patricios (@orestaki) There’s a beautiful quote about horses by Australian poet, Pam Brown, that speaks so eloquently about the relationship that humans share with these elegant creatures. “A horse is the projection of people’s dreams about themselves — strong, powerful, beautiful — and it has the capability of giving us escape from our mundane existence.”

This quote is so apt, given that this week we pay homage to Nedbank and the star of its new television commercial: a horse. And you’re right — the green bank has been making some really great ads of late.

A month ago, our Ad of the Week was “Bathtime”, for Nedbank’s home banking division, which tugged at our heartstrings with the story of a dad getting home in time for his baby’s bathtime.

This week, still under the overarching theme of “Things that really matter”, we have no choice but to give Nedbank another nod, for “Reins” — a TV ad aimed at the business-banking client. And, once again, the execution of the television commercial is by agency, Joe Public, with production by Velocity Films under the direction of Greg Gray and cinematography by Paul Gilpin. 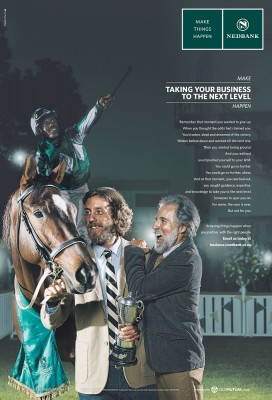 This moodily shot mini-movie (there is a three-minute version as well as a shorter 60-seconder) tells the story of a farmer who keeps horses — perhaps he is a horse breeder. The story begins in the early morning, when the young farmer takes a milk bottle to the stables for his new foal. The little creature springs to her feet as he enters, and there is clearly a bond developing between the two.

The montage that follows explores how close the two have become, with some poignant scenes of the two playing together, the filly knocking over the bucket while she’s being groomed, neighing in his face, and following him around everywhere.

The turning point in the story comes when it’s time for him to put a bridle on her, the first step towards her becoming accustomed to somebody riding her. But the horse will have none of it and, try as he might, he cannot get her to come close when he has a bridle in his hand.

The music throughout is a touching piece by Swedish singer/songwriter, Jose Gonzalez, called “Stay Alive”. It was used for the soundtrack of the 2013 remake of “The Secret Life of Walter Mitty”. It’s a gentle love song that sweetly underscores the relationship between man and horse.

Frustrated by his inability to bring his horse under control, the farmer makes a phone call, and soon an older man arrives. This is the ‘horse-whisperer’ — a man with a knack for communicating with horses and persuading them to allow riders. The older man now becomes the farmer’s partner, as they train the filly, first on a long rein, then with a saddle, and finally with a rider.

The climax of the film is when the horse is entered in a race, and wins — an exciting and fulfilling occasion for any racehorse owner. The two men embrace in a warm and emotional moment — it’s moving without being schmaltzy. The payoff line is “Take your business to the next level”.

The story is clearly a parable for a small-business owner. When the going gets tough, you need a partner who has what it takes to get you to the next level, whatever that might be for you. And that is what Nedbank Business Banking provides.

It’s a great message in a story that’s beautifully shot and well-told. Once again, Joe Public and Velocity take the reins and lead all the way.

You see, horses are about our dreams. And when our dreams come true, they are sweet victories, much like a noble steed crossing the finish line, having been reared, nurtured and encouraged by us, all the way.