Ad of the Week: Life as a (video) game

by Oresti Patricios (@orestaki) A Cadbury Lunch Bar promotion that gets people to look a little closer is the brainchild of digital agency Hellocomputer, in celebration of Lunch Bar’s Golden 50th anniversary.

The campaign uses a visual language that will instantly be recognisable to any video gamer: the illustrations in the advertising promotion feature ‘retro’ images inspired by each of South Africa’s major cities (and the Karoo). 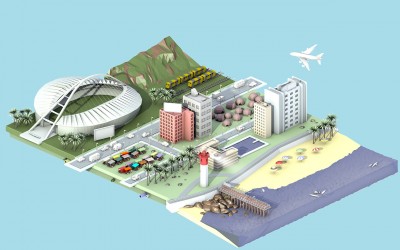 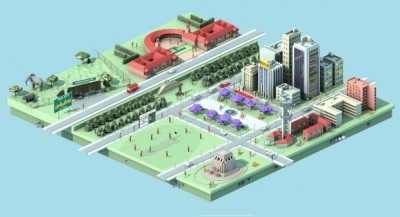 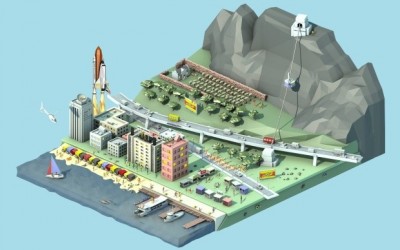 Known as ‘low-poly’, this type of 3D graphic harks back to an era when computer graphics were not as powerful as they are today. In other words, this campaign pays homage to the pixel. The colour palette chosen is also quirky — a slightly desaturated, pastel look that gives it a unique look.

Computer graphics cards are measured by their ability to process polygons — the more polygons, the more detail you get, but also the more graphical power that’s needed to make the images appear smoothly on the screen. Low-polygon games were all that older computers and consoles could handle and had a characteristic pixelated look, which is where the term ‘low-poly’ comes from.

The fashion in video games — especially amongst independent gaming studios — has been to hark back to that era. Think of it as a nostalgic nod to games such as Minecraft that feature characters that look like they’re built out of Lego blocks, and environments that consist of untextured, flat colours. If that sounds boring to you, then you must have beamed in from another planet, because 27m+ people have been bitten hard by the Minecraft bug.

The charm of low-poly is in the simplicity, and the Lunch Bar illustrations have hooked into that. Each city is condensed down to a few city blocks, but each one is instantly recognisable to any South African who knows their geo-culture. 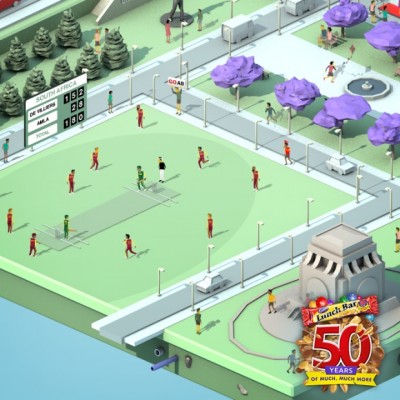 Pretoria is represented by the Union Buildings, the Voortrekker Monument and purple jacaranda trees, along with a cricket pitch and other buildings.

Cape Town features — naturally — Table Mountain and its cable car, vineyards, the V&A Waterfront and a ‘Kaapse Klopse’ parade. It also has a space shuttle taking off — a quirky little bit of invention on the part of the artist.

These city/landscapes were created by Duncan Bell, who is also a game designer; so he has a natural passion for the style. To create the campaign he used Cinema 4D, software that is used by many game designers to create video game environments. 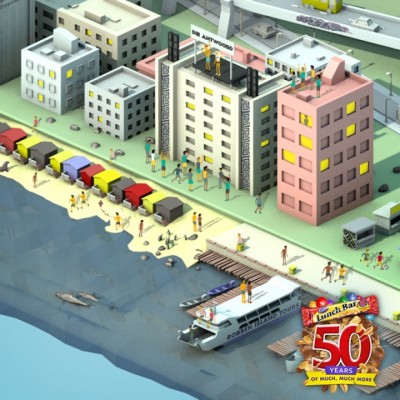 Games are a big business, even in SA. A recent study by PricewaterhouseCoopers found that South Africans spend some R1.4bn rands on games and gaming products; internationally the industry earns more than Hollywood does — some US$76bn dollars per year. The aforementioned Minecraft was bought recently by Microsoft for US$2.5bn.

At any time of day, between 6m and 9m people are logged onto Steam, the world’s biggest online distributor of video games — which boasts an active membership of 125m people. Because of the nature of these games, those people often want to eat without leaving their stations, so snacks such as chocolates are always going to be part of the culture.

So there is a smart logic behind Hellocomputer’s thinking in this campaign. It will appeal, perhaps on a subliminal level, to those gamers old and new who appreciate the aesthetic. It should also appeal to anyone with a quirky design sense. 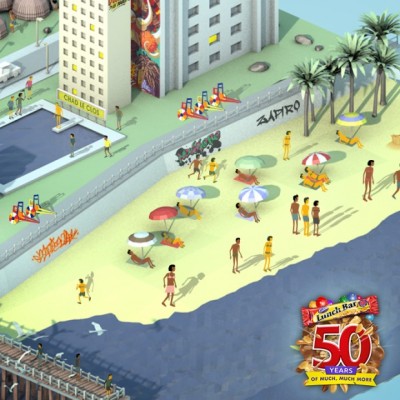 What adds to the fun of these graphics is the detail, which was added by a second artist, Reynard Nel. He included intricate scenarios and human interactions within the scenes, from people doing a tug-o-war on the roof of a Jozi building, to the band Die Antwoord playing for some fans in Cape Town. It’s reminiscent of those “Where’s Wally” books; the longer you look at the picture, the more little details pop out at you.

The campaign used phone-in competitions at radio stations Metro FM and 5FM, where callers had to answer general knowledge questions about SA, with clues often to be found in certain illustrations. Questions also were posted on Facebook, where the illustrations were published, with clues. Running concurrently with this were barcode/SMS competitions held through Sasol petrol stations, and Spar and Shoprite Checkers supermarkets.

Cadbury, which was bought a few years ago by Mondelez (the huge multinational that owns Kraft, among others) has retained its SA identity in brands such as Lunch Bar, which was found by Ipsos Sunday Times to be “South Africa’s most-loved chocolate” — and although that was in 2008, the brand still capitalises on that — and that it was awarded the TGI Icon Brand in the chocolate category in 2014. 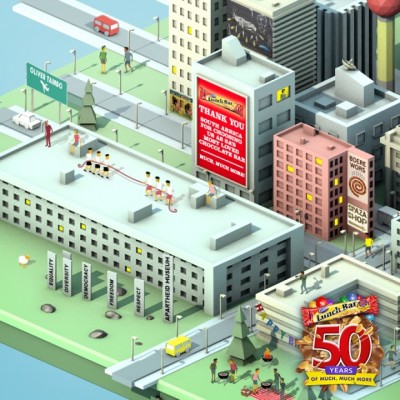 The brand has a long and illustrious track record in SA, with even those of us in our 40s and 50s thinking fondly of the ‘much more munch’ ads — remember: “What kind of a Mac are you?” — “I’m a Makatini!” For a little nostalgia, view the series of ads in Shelf Life: Happy 50th, Lunch Bar!

Even then, the brand took pride in its South African roots.

This campaign works across several media channels to raise brand visibility, and I think it succeeds on several levels. What makes it unique is this retro/modern/gamified graphic treatment: simply sublime.

Welcome to the game revolution, Lunch Bar. Here’s to much more munch, obviaas!