by Herman Manson (@marklives) Times Media Group (TMG) has announced that Avusa Publishing, a subsidiary of TMG, has reached an agreement with Pearson to acquire Pearson’s 50% shareholding in BDFM Publishers. 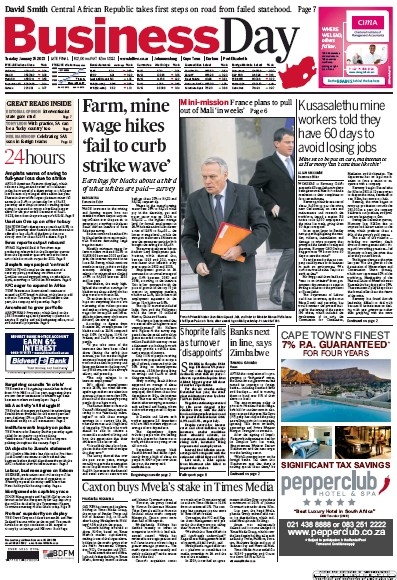 Ignition and Saffron on DSTV in Southern Africa.

“The full acquisition of BDFM by TMG will allow for economies of scale, an integrated operations platform and operational synergies, and will permit BDFM, under unified ownership, to accelerate its digital transformation,” TMG said in an announcement on the JSE news service SENS.

“BDFM will continue to have an ongoing relationship with the Financial Times Limited through a content syndication agreement, and a programme through which BDFM journalists benefit from training placements at the FT,” according to the SENS announcement.

An independent Editorial Committee will be appointed to approve or reject the appointment or dismissal of editor for Business Day and the Financial Mail. It will also ‘hear and adjudicate on any disputes referred to it by an editor that may arise in relation to the interpretation, implementation of and/or compliance with an agreed Editorial Charter, which is designed to ensure that the aforesaid editors uphold the highest standards of professional, independent, honest,   responsible and accurate journalism, and will adhere to the highest ethical standards at all times.

Financial details of the deal were not disclosed.