Lurking behind Apple’s share-price woes is the manner in which the Samsung Galaxy S4 further eclipses the iPhone 5, writes Arthur Goldstuck (@art2gee).

This past week, when Apple reported its first drop in profit growth in a decade, much was made of the fact that the market was punishing it unduly harshly. Descending from a $700 high in September 2012 to a bumpy ride along a $400 floor in April 2013, it is hard to believe it’s the same Apple.

Yet, the company reported record iPad sales, up to 19,5-million in the second quarter of last year, from 11,8-million for the equivalent period 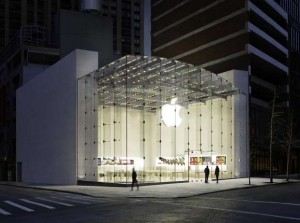 last year. iPhone sales were also not too shabby, up from 35,1-million to 37,4-million. Analysts were unanimous that Apple was being punished because its pace of innovation had slowed, and there were no killer products on the horizon to follow in the market-shfting footsteps of the iPod, iPhone and iPad.

There is a more fundamental force at work, however, and that is called competition. When Steve Jobs presided over the launch of the iPhone 4 in 2010, Apple was so far ahead of other manufacturers, its fans could not even countenance the idea of anyone catching up.

Just two years later, when it launched the iPhone 5, it was fighting a rearguard action against the new front-runner. Samsung had released its groundbreaking Galaxy S3 in May 2012, giving it a six-month head start over the new iPhone. And even then, Apple produced a device that did not match up to the S3.

Another six months on, and Samsung has made another leap. The Galaxy S4, released worldwide last week, is evidence not only of how far ahead Samsung has moved, but also of the massive shadow Samsung has cast over Apple. In the last quarter, Samsung sold an estimated 65-million phones, thanks to producing devices that meet every price point in the smartphone spectrum. From the entry-level Galaxy Pocket to the mid-range Galaxy S3 Mini, it serves the lower-end market that Apple didn’t even know existed until last year.

When Apple released the iPad mini, despite Steve Jobs’ infamous vow never to release a smaller tablet, it was acknowledgement that smaller, cheaper devices were destroying its market dominance. Samsung’s own Galaxy Note 8.0, released this month, is a shameless copy of the mini, but the resemblance has largely been ignored as the market focused on the real battleground. The question is no longer what Apple will do about being copied, but what Apple will do to address the market that Samsung owns – and the one it is about to own.

The answer will come in June, and is likely to come with several stripped own versions of the iPhone, at prices that will appeal to a broad market – especially in the developing world. If that is Apple’s strategy, there is no doubt that it will be hugely successful in terms of sales and market penetration.

But its success will also be its biggest enemy: in the same way that record iPad sales are being driven by the cheaper mini that produces lower profit margins, chances are that an “iPhone mini” will also deliver massive sales – but also at the cost of profit margin.

The real chink in Apple’s armour revealed in its latest results is the massive fall in gross margins – from 47.4% a year ago to 37.5% this year. As Apple finds itself playing catch-up with Samsung both in its flagship device and in its market strategy, that margin is likely to fall even further.  Investors dislike falling margins as much as they resent slowing profits, which means there is not likely to be too much respite for them too soon.

That alone is enough to cast a long shadow over Apple’s previously untarnishable shine.

But add the fact that expectations for the Galaxy S4 are for a wildly successful device that will put to rest the debate about which is the better phone, and Apple finds itself in total eclipse.