by Gill Moodie (@GrubstreetSA) We’re only just more than two months into the year and we are already seeing the effects of  the change to the JSE rule governing the publishing of financial notices.

BDFM’s Business Day completed a round of voluntary retrenchments in January in which 32 people took packages from editorial, sales and 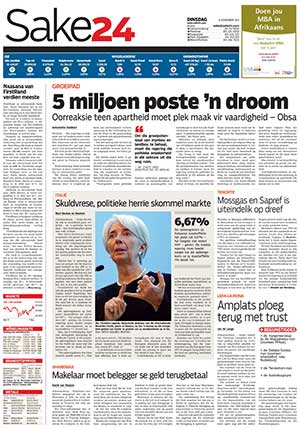 marketing while Tim du Plessis, head of Media24’s Afrikaans newspapers, told Grubstreet recently that Sake24 has reduced its editorial positions from 33 budgeted jobs to 24, effective from April 1, through  a combination of retrenchment and  scrapping of vacancies and transferrals.

“We’re adjusting as it’s a small team but, you know, business news in Afrikaans is important to quite a lot of our readers,” Du Plessis said.  “Readers in Jo’burg and Cape Town don’t pick up Beeld and Die Burger to read business news in the same way that people don’t pick up Business Day to read sports news. But it’s important. They want it there and it’s got to be well presented.”

No doubt there is a measure of both companies being proactive before the new financial year kicks in but it is also a measure of how both Business Day and Sake24 benefited from the JSE rule that required  JSE-listed companies to publish results and price-sensitive information in an English national daily newspaper and in one other in another official language (usually Sake24, the business supplement carried in Media24′s Beeld, Die Burger and Volksblad).

With the change that kicked in on January 1, a short-form announcement now suffices in a daily newspaper in any official language.

Du Plessis told Grubstreet: “We battling. We’ve lost a significant amount of the company notices. It’s really hitting us hard. We’ve maintained some of them and we are constantly surprised by those who have stayed with us and those who didn’t.

“But we are making new plans and are going out to convince the companies that they still need to advertise their results with us. We have all manner of innovative ideas that we are taking to them and saying here’s your space, tell your company’s story here.

“We’ve really caught on with integrated reporting (digitally and in print) and are making it part of our campaign. So we are saying in terms of the principles of integrated reporting you must continue to communicate with people who don’t have access to the internet and here is a solution.”

In January Peter Bruce, BDFM publisher and Business Day editor, told Grubstreet about the effect of the retrenchments on his paper and how Business Day has come up with a new offering for companies as part of its plan to combat a loss in revenue.

It is also involves integrated reporting.

“It’s a package of things we’re going to offer companies,” said Bruce, “live-streaming their results, obviously some form of advertising in print, archives of the company next to the stories, the latest stories of whatever sector the company happens to be in…  where we can bring a lot to bear in any package which involves the company wanting to tell its investors what it’s doing… The company gets to choose what it wants to say.

“Obviously, we will write our own stories but around that, we will package all this stuff… In a way, you can do it in digital much more easily than you can in print.”