FNB’s You can help – the ad campaign with democratic tendencies

ANCYL statement: “…young people are used in a callous and cruel manner, and we have to wonder whether indeed its Chief Executive, Michael Jordaan, would not have the courage to face the nation, the government and the ANC, when he agitates for an overthrow of our government, would he indeed hide behind the faces of young, innocent children, used for the whims and entertainment of capital to drive what is undoubtedly a treasonous agenda?”

FNB statement: “South Africa is rich in values, tradition and culture, a truly wonderful country, and one that is admired around the world. Yet, 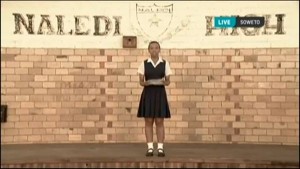 as South Africans, we sometimes forget what our great nation has achieved and remains capable of achieving. It is in times like these that we need to be reminded of the greatness inside all of us, and what is possible when help is joined to common purpose and courage to necessity.”

Our take: A social contract exists between civil society and business that demands of business to engage with communities on issues relevant to them. Conveniently, business often ignores this contract, preferring to stay close to the politically connected, avoiding ‘hard’ issues and offering little more than sport sponsorships as their part of the bargain.

Those too young to vote are already eyeing the difficult and real issues they will inherit from their elders. They need to be heard, now, even if what they have to say to the generation in charge is not what that generation wants to hear.

There is power here. It belongs not to the ruling party, or to big business, but to the emerging political activism of a generation born free. Their day is coming. FNB simply acknowledges this.