by Herman Manson (@marklives)  Judges of the recently held Sikuvile Standard Bank Newspaper Journalism Awards, which also recognises newspaper excellence in advertising, printing and production, layout and typography, as well as the balanced use of pictures and graphics, were critical of the limited visual innovation they saw in entries this year. The judges raised concerns about the standard of printing, 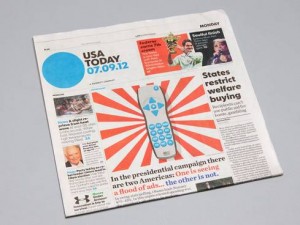 the lack of illustrations and pointed out that typography were also not used to its full potential in newspaper design.

MarkLives: You visit South Africa every so often. Any noticeable changes in the evolution of the production and design of our papers over the couple of times you have been here?

Charles Apple: Not so much. In fact, I continue to be disappointed in the level of infographics – or lack thereof – in South African newspapers. I don’t see nearly as many in the other leading national papers as I do in the Media24 papers. The fact that Media24 swept the design categories of your national contest this year doesn’t surprise me a bit.

MarkLives: The judges at the recent Sikuvile Standard Bank Newspaper Journalism Awards commented that the “standard of printing has fallen and unfortunately there appears to have been little visual innovation this year.” How would you recommend editors and publishers address this?

Apple: For starters, visuals shouldn’t be about the visuals. GOOD visuals are about storytelling. One of the things a good visual journalist needs, in fact, is the ability to tell an editor: Hey, I realize what you asked me for. But instead, here’s a better way to do that.

In fact, I don’t think that happens in South African newspapers. South African newspapers – or most of the ones I’ve seen – seem to be very much “top-down” management systems. In other words, the editor gives the orders and then the staffers carry out those orders. A pecking order is very well-established. But this system doesn’t allow for much innovation. Unless the editor is open to new methods of storytelling.

So that’s the first thing I’d suggest: Editors who are more open-minded and less embedded in the old, traditional way of doing things. Or, more simply: If you want to see innovation, then you have to put innovative people in charge.

Once the editor is open to different ways of telling stories, then part two comes into play: Do it. There are so many interesting things a paper can do with alternative story forms. Or picture pages. Or informational graphics. Or multimedia presentations. Only a few papers are dabbling in these areas. Yes, it helps to have talented visual journalists in key positions who have experience or training in these matters. That’s where the training comes in.

I think that’s why Media24 is so far ahead the rest of the country’s newsprint media in visual journalism. They’ve tried to get editors to innovate (with varying degrees of success). And they’ve invested in training (Umm, me).

MarkLives: They did highlight Typography as a design issue – what is the trend internationally in terms of the use of typography in newspaper design at the moment?

Apple: The trend is toward sophisticated, intricate use of typography. It looks simple on the page. But in fact, there are lots of balances between weights of fonts, leading (the space between lines), widths of copy blocks and so forth. For the past few years, the Guardian of London has been the standard for typographical-minded editors. I see a lot of papers emulating what they do.

In truth, though, a lot of South African papers use older, clumsy-looking typefaces. There are newer, more elegant choices to be made. By sticking with what they use, many of your papers seem to be falling further behind.

And the actual font is just part of it. There is spacing to consider. Use of white space. When to use colour text and when not to.

It puzzles me why South African newspapers don’t use type better. Some of your magazines use type VERY well. So it’s not like there are no designers in the country who are up to the task.

MarkLives: Are you happy with the standard of infographics the newspapers (you have reviewed) here are producing?

Apple: No. I started working with the infographics artists at Media24 in August 2009. By now – three years later – I would have expected to see the other papers around the country trying more infographics and experimenting more. But during my last visit – in August – I didn’t see anything at all, really.

I find it puzzling.

Also, I would have expected the country’s journalism schools to become interested in teaching news design and infographics: “visual journalism.” I’m not seeing much of that yet. The designers I’ve worked with haven’t been contacted themselves for classroom appearances. The assumption I have to make: There is no interest in visual journalism on the part of your universities.

And that’s a shame, because the field is so ripe. As bandwidth continues to improve in South Africa and folks increase their use of devices like iPads, do you know what’s going to make FANTASTIC content for those tablets? That’s right: Infographics.

So I don’t get it. Papers should be all over infographics. And your journalism schools should be scrambling to prepare students for that need.

MarkLives: And online – are you positive in terms of how design and production of SA newspapers are evolving in a multi-media environment?

Apple: I’m not seeing much online at all. Just the same ol’: Web sites and stories.

I’m impressed with how well South Africans have taken to Twitter. That’s because of the widespread use of smart phones there. Twitter is a powerful tool. I’m glad the nation’s journalists have jumped on that.

But I’m not seeing a lot of multimedia graphics. And I’m constantly searching for them.

MarkLives: What was your impression of the newspaper market in Nigeria and Kenya where you recently did some consulting work?

Apple: In both countries, I saw a deep hunger for more visual journalism.

In Nigeria, I was able to work with a few journalists and teach basic infographics and design principles. The issue there is: How do you get graphics into the paper? Seems to me what they’re lacking is the first part of the equation: Editors who are open-minded enough to allow for new forms of telling stories.

Until they get to that point, the visual journalists – no matter how eager or talented – can only get so far.

In Kenya, I saw nearly the opposite: The level of design was much higher than I would have thought. In fact, I saw a number of folks there who I thought might make good hires… if papers in Nigeria or South Africa don’t mind recruiting from Kenya, that is.

I was fascinated by this. And despite the fact that I tried hard to be prepared for each visit, neither turned out the way I had expected.

I ended my travels this summer convinced – more than ever before – that there is SO much potential there in Africa – and not just in South Africa, but all over the continent – for fabulous newspapering. I can’t wait to see what folks there do next.

MarkLives: I’ve seen somebody argue that newspaper re-designs lack innovation preferring to copy of other designs. Is this a fair complaint and if so how can it be remedied?

Apple: It’s a fair complaint. I think it’s the result of editors – or perhaps publishers or owners or perhaps all of the above – who are afraid to take chances.

Bottom line: You can’t innovate unless you’re willing to take a chance. If you’re too afraid to take chances, then the best you’ll ever do is stumble along a well-beaten path. It’s that second one that you’re noticing, Herman.

If it makes you feel better, though, U.S. papers – to a large extent – have that same problem. The unwillingness to innovate is one reason the news industry here is in the financial state it’s in. Editors and publishers are waking up. But their efforts now may be too little and too late.

My advice to editors in South Africa, Africa and, yes, here as well: Stop making the same mistakes over and over again. Find new mistakes to make. If you’re not making mistakes, then you’re not trying hard enough to innovate.

– News you’ll make time for. Sign up for our free newsletter!