New normal quite good at Y&R

by Herman Manson (@marklives) Just over a year ago Y&R, let’s be honest, looked like a mess, at least from the outside. No they won’t say it, but after the exit of Frasier Lamb, and the disastrous strategy of non-communication it employed in a market filled with speculation and uncertainty, coupled with a mini-guerrilla war inside the agency that was playing out quite publicly, the broader perception on the state of the agency in the marketplace wasn’t positive. And in this industry perception counts for quite a bit.

The agency brought in as its new CEO Andrew Welch, a brand expert from Landor Associates in London, to set things back on track, and working 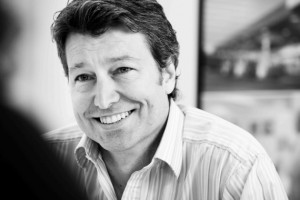 closely with new ECD Graham Lang, Y&R has been reorganising its business to the extent that it recently landed the Telkom account, meaning it now handles two of the  5  biggest advertising accounts in the country (the other being Pick n Pay).

Welch, who joined in May a year ago, quite likes the new normal at Y&R, having helped the agency transition to what he calls Y&R 2.0.

Considering the internal goings on at Y&R at the time bringing in somebody with an outside view was probably the best thing the agency could hope to do. Welch realised the need for change, while also acknowledging the positives built up over the past several decades within the company, if the business was going to be taken to the next level. It needed to expand its strategic thinking, create more compelling creative and transition from ATL to through the line, says Welch.

Since Welch signed up Y&R has steadily been building its though leadership profile, is competitive in the awards stakes and has been winning business and attracting talent, all key points on Welch’s road map for the agency. It is also becoming an exporter of thought leadership to the international network.

Welch says that while many knew of the agency very few people really knew it. It’s something that is changing as the agency builds on its strengths, extends it offer and gains confidence in its own voice.

Welch says the agency required clearer leadership and objective setting when he arrived and those elements have now been put in place.

It’s an agency for grown ups, says Welch, who takes obvious pride in the seniority of his management team and their extensive experience across disciplines.

Welch also beefed up the strategy department, bringing in Michael  Cathie , the ex-COO of Microsoft South Africa and a former communications director at Cadbury’s, as Group Executive Strategy Director. The creative department is managed by Graham Lang, who was tasked with rebalancing the creative offering across the Johannesburg, Cape Town and Durban offices while Rui Alves serves as ECD for Y&R in Johannesburg.

Building a greater sense of Y&R nationally will contribute to a cross-fertilisation of ideas across the offices and aims to create a sense of ‘oneness’ Welch says was not there before.

In Cape Town the agency has moved into new offices, Durban is moving soon and the Johannesburg office is undergoing an extensive refurbishment, says Welch. It’s part of a focus on creating local environments that inspires staff and physically manifest the agencies renewal.

HR, which Welch sees as central to building the Y&R community, no longer sits on the periphery, and finance have also been beefed up. The agency is also extending its shopper capabilities and is seeking greater integration between its traditional and shopper solutions.

In a bid to foster deeper client relationships Managing Partners have been appointed to specific client accounts, tasked with building the structure and integrated teams able to respond to client needs. They serve as a single point of contact for clients and have considerable authority – including being able to build on their teams from the wider Y&R talent pool.

It’s a model Welch believes makes the agency more accountable to clients. In a world where marketing offices have become something of a revolving door the agency gets to step up as a repository of knowledge and brand DNA.

Welch admits Y&R has some way to go on its digital offering but says it has made decent strides in this area over the past twelve months.

The new business, especially the Telkom win, is testimony to the changes wrought at Y&R, says Welch. The agency was also recently appointed as the lead agency for the  Jaguar Land Rover account and won the business of law firm Cliffe Dekker Hofmeyr.

While happy with the progress Y&R has made over the past twelve months Welch admits more work needs to be done if it want the become the agency in South Africa. This includes further investment in shopper and digital capacity and greater focus on strategic and creative thinking and insights for clients. It also needs to become a greater part of the fabric of the creative community in South Africa.

Y&R South Africa currently employs 175 people. They are a mix of old agency hands and new people brought in by Welch and Lang. The biggest challenge he has faced these past twelve months, says Welch, is insuring they all feel part of the new Y&R community, and ensuring a dual culture doesn’t evolve within the agency.

For Telkom he sees massive opportunity saying it has the potential to once again become an iconically South African brand. The agency is building a team and structure in Johannesburg dedicated to the account.

News from adland you will make time for. Stay up to date with our weekly mailer. Subscribe here. It’s free!

One Response to “New normal quite good at Y&R”